After more than a 15 year successful career at Frankfurter Allgemeine Zeitung, a former editor of the paper revealed how governments and intelligence agencies use and abuse the German media for propaganda purposes. Udo Ulfkotte, the author of Gekaufte Journalisten (Bought Journalists) feels shame about his own involvement in manufacturing stories and planting information. He claims the situation now is too dangerous to not see clearly about the various interests behind the articles. 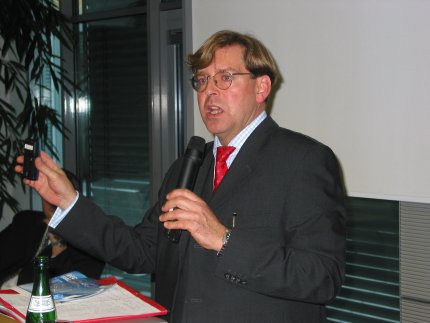 Bought Journalists is not your first book criticizing the German media, but certainly it is the most detailed and most hard hitting. Why did you write this book now, in this moment?

I did not write it now, rather many years prior. I felt it was the right time to make slight modifications and publish it, because I am deeply concerned about the Ukrainian crisis and the reporting of it. I am not pro-Russian in the least but it is clear that many journalists blindly follow and publish whatever the NATO press office puts out. And reporting like that is determined to be very one-sided.

Despite your book becoming a bestseller overnight, the German media barely reports on it. What could be the reason for that?

It is true that my book is boycotted in the media but only in Germany. Internationally the situation is different. Many newspapers reported on it from several large countries all over the world. I get invitations to various TV shows all over the world. In my own country they have not yet decided what to think about me, because I named countless journalists who cooperate with the CIA or have intimate relationships with other intelligence services. The journalists involved are most likely shocked to see their own name printed in a bestseller. But what can you do? I am a person who uses a huge number of citations, references and all the evidence is in my possession.

In another interview you gave recently you stated that journalists are often approached covertly. They receive free trips and opportunities for networking that are managed from the background. When did you first realize that you were used as a tool for propaganda, as your own earlier description of events says?

Look, it is clear as day that the agents of these services were at the central offices of Frankfurter Allgemeine, the place I worked for 17 years. Articles appeared under my name multiple times, that were not my own intellectual product. One time I was approached by someone from German intelligence that I should write about Gadhaffi. How he tried to build a chemical weapons plant in Lybia in secret. I had no information about any of that, but they presented me with various documents, I only had to put my name on the article. Do you think this can be called journalism? I think not. This is the betrayal of the readers who think they can get real information for their money, but in reality they only buy propaganda materials.

If this managed journalism, hand in hand with the intelligence services is so widespread as you say, how come you are the first who is willing to tell the truth?

All the journalists who speak about this issue, they are immediately fired. My home was searched six times, I had three heart attacks but I have no children to think about. I am free without any financial constrains. I want to leave this world with my conscience clear, and I don’t want the lies to burden me any more. I am deeply ashamed of the so called work I did for Frankfurter Allgemeine. I am ashamed of it. The people who I worked for knew everything I did all along. And the truth must come out. It is not just about Frankfurter Allgemeine, this is the whole system which is corrupt to the core.

As far as I know, Frankfurter Allgemeine did not officially respond to any of the charges laid out in your book. Were you contacted perhaps by the board or the journalists in an informal way?

They didn’t react anything to my book and they never contacted me. I notified them before the book was even published and that time they said they will sue me. Very good, sue me I said. If Germany is not a banana republic, the truth will come out at the courts also and win in the end.

From all the people and organizations mentioned in your book, did anyone sue you?

No. So far nobody did.

In your book you mention George Soros, who is considered a very controversial figure in Hungary. Some people think that through his foundations and grants he is a selfless promoter of humanism. Others believe he represents the interests of the United States abroad through his organizations, which hide behind hypocritical messages. Which view is closer to the truth in your opinion?

In my book I mention George Soros and what I write about him is not very positive. In my opinion, the publicly stated values and goals of Soros and his organizations and the truth has nothing to do with one another whatsoever.

Sometimes here in Hungary one may get the idea that ever since a Fidesz government was elected, the western and especially the German media reports much more often about Hungary and aims to portray it in a negative light, almost exclusively. Are we paranoid or is there something in the background of this?

This is no paranoia. The so called Alpha journalists – who have very close connections to the Western political elites – only write what they are told to write, for this reason, Hungary cannot have positive coverage. Since Hungarians are not willing to blindly serve the interests of the United States and the European Union, destabilizing Hungary is the goal and certain political interests are in the background. Unfortunately this is the result if a country does not want to be treated like a colonial appendage of the United States or the European Union.

The German press is full of articles about antisemitism, racism, and the rise of the far-right in Hungary. While these are important topics the apocalyptic tone of these articles and the frequency of them is incomprehensible to anyone with knowledge about the situation in Hungary. If German readers are really so sensitive and interested in antisemitic and racist statements and issues, why is the German media not dealing with many similar and often much more serious cases in other countries?

This is all part of the propaganda aimed at weakening the stability of Hungary. Antisemitism is a much bigger problem in the Netherlands for example among the Muslim community there, but this is something the German media fails to notice, they close their eyes.

Now that you have published your book, what will you do? Do you plan on writing another book, or going into politics? Or trying to build a media company, doing journalism without any compromises?

I plan on writing a follow up book, with even more facts and evidence about the cooperation between journalists and intelligence agencies.

Since you are disillusioned with the media, and knowing all that you know about the background of the media, how do you get your news? Which papers or channels do you trust?

Udo Ulfkotte was born in 1960. He worked for 25 years as a journalist. 17 of those years he spent at Frankfurter Allgemeine Zeitung(FAZ).  During this time he wrote over 3400 articles for the leading German language conservative daily and served in many roles, including, war reporter and editor dealing with foreign policy issues.

The original interview was made by Ágnes Győr and it was published in daily newspaper Magyar Nemzet on 25th of October. 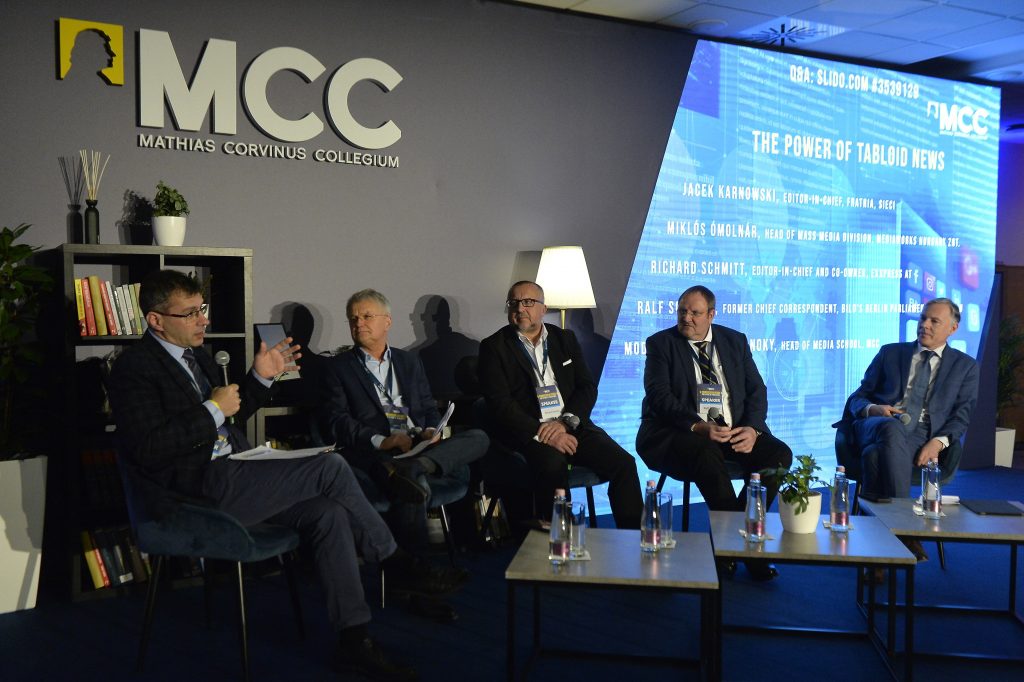 The mainstream media in Austria and Germany are telling people to support the woke and gender ideology, and to be pro-immigration, Richard Schmitt, editor-in-chief and co-owner of the Austrian Exxpress AT, said in a panel discussion on Thursday in Budapest, on the second day of the Mathias Corvinus Collegium (MCC) international conference on the state […]
Hungary Today 2023.01.27. 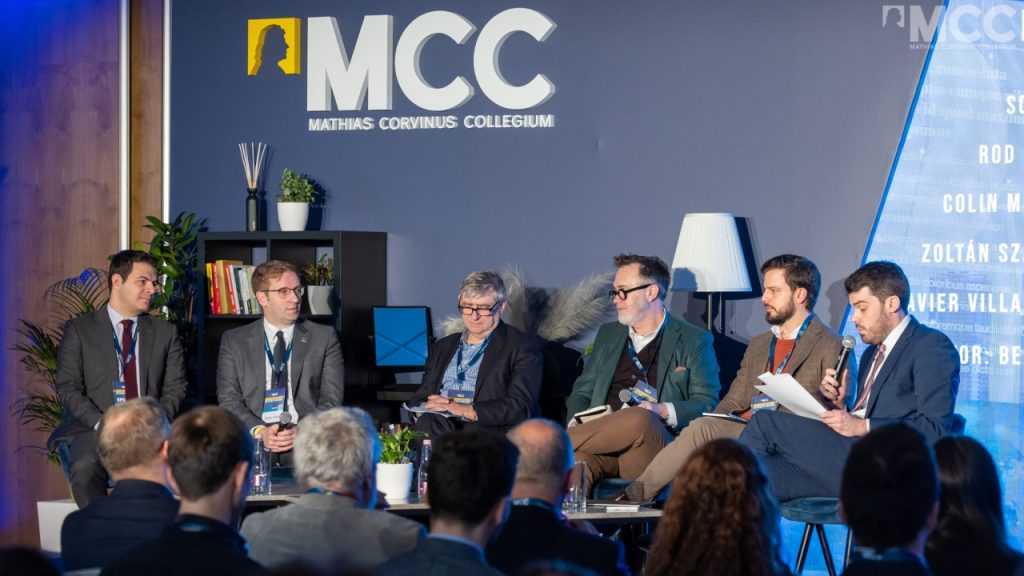 Hungary’s leading talent promotion institution, Mathias Corvinus Collegium (MCC), is holding a two-day conference in Budapest from Wednesday on the future of publishing. On the first day of the conference, many interesting and thought-provoking discussions can be heard, for example about journalism nowadays, and how journalists approach certain topics. International and national experts, publishers, and […]
Barbara Bene 2023.01.26.