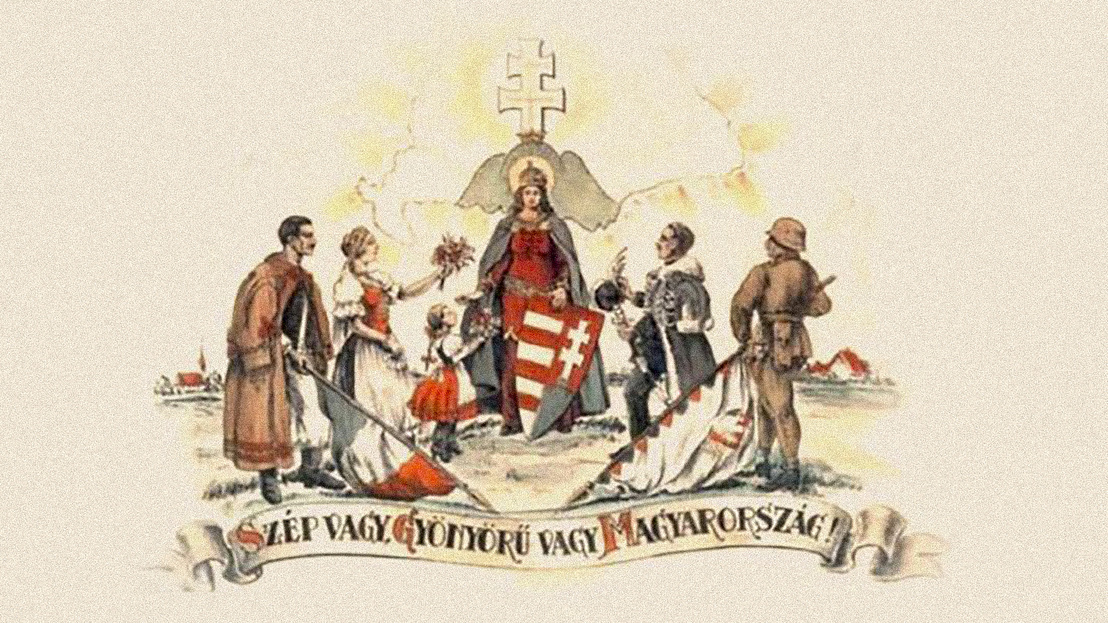 The song You are Beautiful, You are Wonderful Hungary (Szép vagy, gyönyörű vagy, Magyarország) is one of the songs in the 1922 operetta The Bride of Hamburg, written by Zsigmond Vincze (music) and Ernő Kulinyi (lyrics). The operetta wouldn’t have aroused as much interest if it hadn’t included the song, which was considered as one of the most patriotic songs of the age – yet it was banned twice in the 20th century. In the era of the Arrow Cross government, it was not played because of its Jewish authors, while after the Second World War the communist government banned it because of its “nationalist” content, and only after the regime change in 1989 was it allowed to be played in Hungary again.

The song is part of the operetta, ‘The Hamburg Bride,’ which was performed in 1922 after the Treaty of Trianon, when Hungary lost around 67% of its territory with millions of Hungarian citizens. Although there is no specific reference to the detached areas in the lyrics or the irredentism movement, which is associated with Hungarian revisionism, to regain control over Hungarian-populated areas in Hungary’s neighboring countries. However, the song became really popular among revisionists and was considered the most patriotic song – and in Romania, it was even censored.

Although it was a popular patriotic song, it has been banned twice in its history. First, under the rule of the Arrow Cross government in 1944. The reason for this seemingly strange move lies in the fact that both the composer and the lyricist of the operetta were classified as Jewish under the laws in force at the time. The author Zsigmond Vincze died before the Holocaust, in 1935, but the composer Ernő Kulinyi died in February 1945 in a westward deathmarch in Bruck.

For the second time, it was banned after World War II under the communist regime, and the operetta could not be played either because of ‘its nationalist content.’ It was only after the regime change when the song was allowed to be played in Hungary again.

Several adaptations have been made since its first publication, including the Intermezzo interrotto movement of Béla Bartók’s Concerto, which he composed in emigration in 1943. However, music historians do not agree in every detail of this particular adaptation. It is an undoubted fact that the anti-Nazi Béla Bartók was sad to watch the tragedy of Hungary in 1943 at the Don, and that is why some people deduce Bartók’s homesickness from the melody – but this is contradicted by the fact that Bartók himself did not have a good opinion of the operetta.

Since then, it has also been performed by Pál Kalmár, who took ‘Gloomy Sunday’ to world success. Hungarian rock band Kárpátia, who mainly plays national rock also processed the song.

You are Beautiful, You are Wonderful Hungary

Where fair mermaids live and on the Tisza soft breezes play
There lives a nation, the folk of legends: there is my place.
Where the ancient Carpathians guard a dream,
And where Csaba is the faithful chief,
Who returns on the stars’ celestial way.

Oh, how our hearts are waiting for his return
and hearing his trumpet thunder!

You are beautiful, you are wonderful Hungary
More wonderful than the whole wide world.
When the music resounds, I see your beautiful face.
We flew back on great steeds
It calls us home, the grass, the tree, the flower and all the greens
And the violin cries loudly that a wonderful country for us awaits.

Even trees bear songs there, girls sing like angels
And a mirage floats on the old Tisza: a fairy castle.
On the great plain, the wind flies miles away
And only the cavalry’s zest may overtake, when it wings its way.

And nothing in the whole world may match
The sound of their trumpets.

You are beautiful, you are wonderful Hungary
More wonderful than the whole wide world.
When the music resounds, I see your beautiful face.
We flew back on great steeds
It calls us home, the grass, the tree, the flower and all the greens
And the violin cries loudly that a wonderful country for us awaits.