Thursday Top Ten: It’s Movie Time! These Are The Best Hungarian Movies Ever 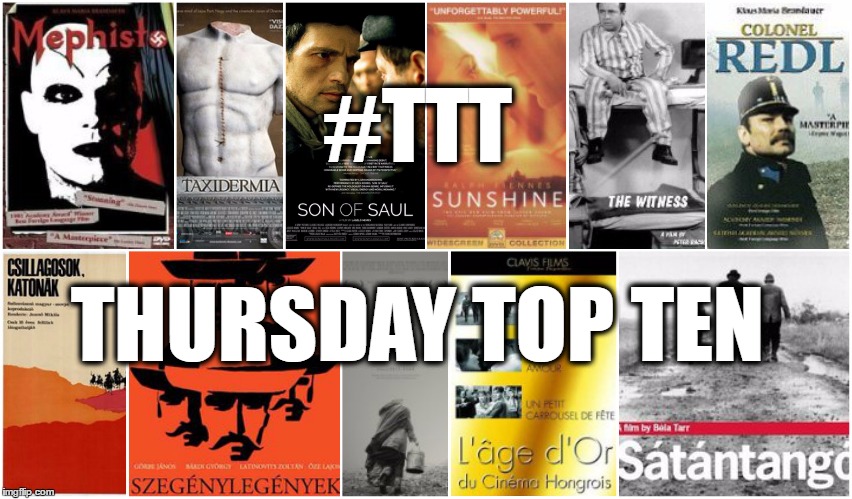 In Hungary Today’s weekly series “Thursday Top Ten” our readers can learn about the most interesting things one can find about Hungary in connection with a given topic. Following last week’s article about contemporary buildings and architectural sights in Hungary, now we collected the top ten best Hungarian movies.

The Round-Up (“Outlaws”) is a 1966 Hungarian film directed by Miklós Jancsó. Well received in Hungary, it was Jancsó’s first film to receive international acclaim.

In Hungary, the national movement led by Kossuth has been crushed and the Austrian hegemony re-established, but partisans carry on with violent actions. In order to root out the guerilla, the army rounds up suspects and jails them in an isolated fort. The authorities do not have the identity of the guerilla leaders, who are supposed to be present among the prisoners. However, they know enough about some of the suspects to apply perfidious forms of coercion effectively.

The Red and the White (Csillagosok, katonák) is a 1967 film directed by Miklós Jancsó and dealing with the Russian Civil War.  It was voted as “Best Foreign Film of 1969” by the French Syndicate of Cinema Critics.

In 1919, Hungarian Communists aid the Bolsheviks’ defeat of Czarists, the Whites. Near the Volga, a monastery and a field hospital are held by one side then the other. Captives are executed or sent running naked into the woods. Neither side has a plan, and characters the camera picks out soon die. A White Cossack officer kills a Hungarian and is executed by his own superiors when he tries to rape a milkmaid. At the hospital, White officers order nurses into the woods, dressed in finery, to waltz. A nurse aids the Reds, then they accuse her of treason for following White orders. Red soldiers walk willingly, singing, into an overwhelming force. War seems chaotic and arbitrary.

Taxidermia is a 2006 Hungarian/Austrian surrealist comedy-drama horror film directed by György Pálfi. The film is a metaphorical socio-political retelling of Hungary’s history from the Second World War to the present day.

Three generations of men, including a pervert that constantly seeks for new kinds of satisfaction, an obese speed eater and a passionate embalmer.

Sátántangó (“Satan’s Tango”) is a 1994 Hungarian apocalyptic art drama film directed by Béla Tarr. The black-and-white movie, runs for more than seven hours. The story is based on the novel Satantango by Hungarian novelist László Krasznahorkai. In 2012, it appeared in the British Film Institute’s Sight & Sound critics’ top 50 films. In the years since its release, Sátántangó has received wide acclaim from film critics, and is considered one of the greatest films ever made.

Plotting on a payment they are about to receive, residents of a collapsing collective farm see their plans turn into desolation when they discover that Irimiás, a former co-worker who they thought was dead, is coming back to the village.

Mephisto is the title of a 1981 film based on Klaus Mann’s novel Mephisto, directed by István Szabó. The film was a great co-production between companies in West Germany, Hungary and Austria.

A German stage actor finds unexpected success and mixed blessings in the popularity of his performance in a Faustian play as the Nazis take power in pre-WWII Germany. As his associates and friends flee or are ground under by the Nazi terror, the popularity of his character supercedes his own existence until he finds that his best performance is keeping up appearances for his Nazi patrons.

Colonel Redl (original title: Oberst Redl); is a 1985 drama by Hungarian director István Szabó. The plot, set in the period before World War I, follows the rise of Alfred Redl, who is an officer in the Austro-Hungarian empire.

Set during the fading glory of the Austro-Hungarian empire, the film tells of the rise and fall of Alfred Redl (Brandauer), an ambitious young officer who proceeds up the ladder to become head of the Secret Police only to become ensnared in political deception.

The Turin Horse is a 2011 Hungarian philosophical drama film directed by Béla Tarr and Ágnes Hranitzky. After having been postponed several times, it premiered in 2011 at the 61st Berlin International Film Festival, where it received the Jury Grand Prix.

It recalls the whipping of a horse in the Italian city Turin which is rumoured to have caused the mental breakdown of philosopher Friedrich Nietzsche.

Sunshine is a 1999 historical drama written by Israel Horovitz and István Szabó, directed and produced by Szabó. The movie is about the fate of a Hungarian Jewish family throughout the 20th century.

It follows three generations of a Jewish family (originally called Sonnenschein, a name that literally means “sunshine” in German, but later changed to Sors, meaning “fate” or “destiny” in Hungarian) during the changes in Hungary from the beginning of the 20th century to the period after the 1956 Hungarian Revolution.

Merry-Go-Round is a 1956 Hungarian drama film directed by Zoltán Fábri, based on the short story Kútban (In the Well) by Imre Sarkadi. It was in competition at the 1956 Cannes Film Festival.

In a rural scenery in the throes of difficult changes lives a humble but promising young farmer girl called Mari Pataki. Her father forbids her from seeing the man she loves. The father, above all preoccupied by work on the fields and prospective wealth, decides to give his daughter in marriage to an old but rich man with whom he does business. Land marries land, he says. This seems to be the unyielding rule of the Hungarian peasantry. But the young lover is ready to stand up to any challenge to keep Maris love.

Althouth it was banned for over a decade for its outspoken criticism of the post-WWII communist regime in Hungary but Péter Bacsó’s ‘The Witness’ of 1969 is known as the best satire about communism. Its candid and realistic portrayal of the incompetent communist regime has earned great acclaim for both the director and the film itself when it was shown at Cannes Film Festival in 1981.

‘The Witness’ takes place during the height of the Rákosi Era, which was closely modeled after the ruthless and brutal Stalin regime. The film follows the life of an ordinary dike keeper, József Pelikán…, Pelikán is elevated into an important position, generally reserved for the communist elite…Pelikán’s hilarious adventure deep within the “sophisticated” communist society. One failure after another the incompetent Pelikán is elevated higher and higher on the communist echelon, all the while remaining completely clueless about his promotions…

“Son of Saul” is the first Hungarian feature-length film to be nominated for Oscar Prize since 1981, and the first winner since István Szabó’s “Mephisto” took the award in 1981. ‘Son of Saul,” the Hungarian Holocaust drama from first-time feature director László Nemes, has sensationally won the Academy Award for best foreign language film.

Set in Auschwitz in 1944, “Son of Saul” tells the story of a Jewish inmate forced to escort his fellow prisoners to the gas chambers and help to dispose of their remains. In October 1944, Saul Ausländer is a Hungarian member of the Sonderkommando, a group of Jewish prisoners forced to lead other inmates in Auschwitz-Birkenau to their deaths and dispose of their bodies in the crematoriums. One day, Saul finds a young boy and, taking him for his son, tries to arrange for a proper Jewish funeral for him.

Cinema City to Reopen, Along With Film Screenings at Budapest City Hall