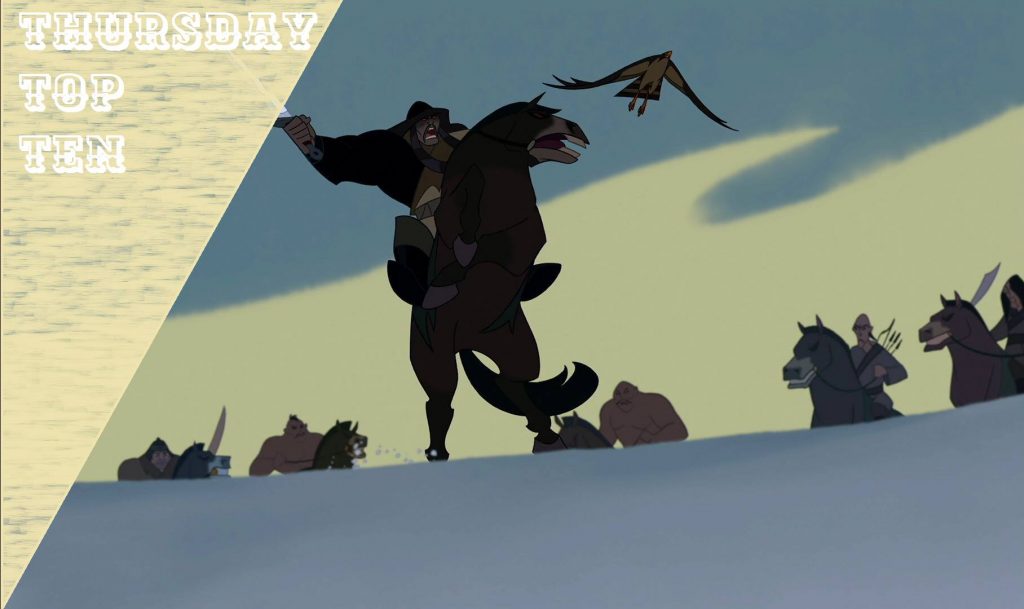 In Hungary Today’s new weekly series “Thursday Top Ten” our readers can learn about the most interesting things one can find about Hungary and Hungarians in connection with a concrete topic. In this week’s edition we are focusing on legends and speculations about well known persons. Some of you may have heard the saying; “Jesus was Hungarian also”. This saying could be the proverb of this week’s collection, as you can read about fabulous Hungarians who are legendary, historical, religious, and literary. There’s just one problem….none of them are actually Hungarian.

According toHungarian Turanism – that’s a loosely defined and diverse (and quite frankly unhinged) strand of thinking among a fringe group of Hungarians – Jesus was not a Jew but a Hungarian or a “noble of Parthia”. A Hungarian non-commissioned officer Ferenc Jós Badiny wrote his book (Jézus Király, a pártus herceg) “King Jesus, the Parthian prince“, where he invented the theory of Jesus the Parthian warrior prince. Some Christian Hungarian Turanists held the view that Jesus Christ was not a Jew but a proto-Hungarian or a “noble of Parthia”. Needless to say, the anti-semitic theories espoused in “Jesus, the Parthian prince” have no basis in reality; and so, sadly, we must admit that Jesus was not Hungarian. 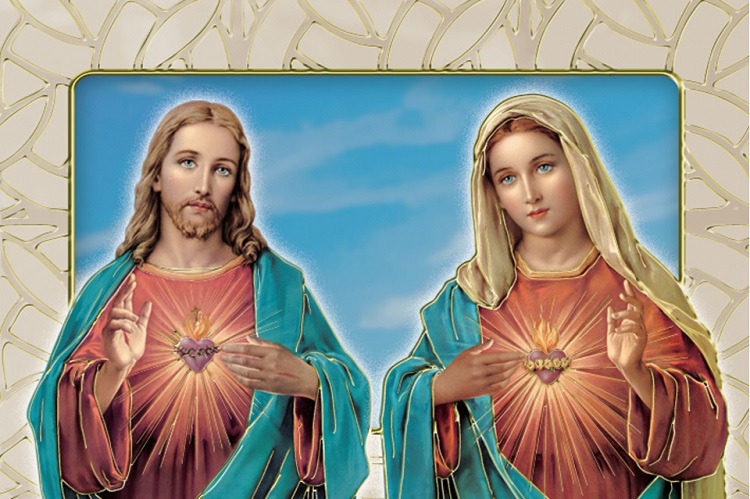 That’s right we are called HUNgary and HUNgarians…so,there is a chance Hungarians may have some historical connection to the Huns (there are several theories about this relationship). Anyway, Attila was the ruler of the Hun Empire from 434 until his death in March 453. The great emperor was also known as “Attila, the Scourge of God” because during his reign, he was one of the most feared enemies of the Western and Eastern Roman Empires. In Hungarian eyes Attila was a humane and wise ruler, sparing Rome from destruction at the request of Pope Leo I. According to the legend he was buried in the River Tisza, but to this day no one has found his grave. 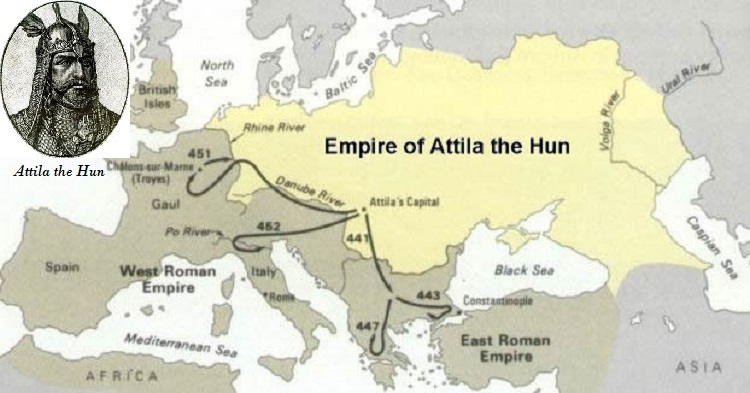 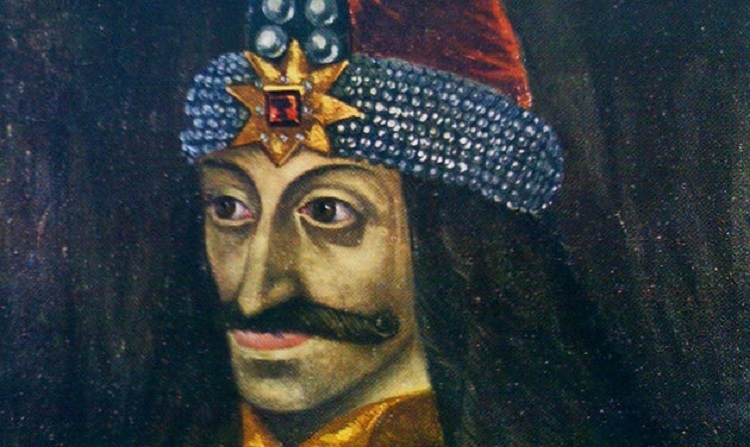 The original ‘Dracula,’ Prince Vlad Tepes of Wallachia– not a Hungarian.

Contrary to popular belief, and despite the fact that the first actor to become famous playing Bram Stoker’s infamous vampire, Béla Lugosi, may have been Hungarian, Dracula himself certainly was not. When looking simply at the fictional character this fact is rather obvious; after all that Dracula is a character drawn from the imagination of an Irishman of the Victorian era. And while there was a historical Dracula, he was not Hungarian either. His name was Vlad ‘Tepes,’ son of Vlad Dracul (hence the name Dracula—son of ‘Dracul’). And while he was certainly a rather unpleasant figure—his nickname is often translated into English as ‘Vlad the Impaler—this real-life Dracula was a Romanian nobleman, Prince of Wallachia, today southern Romania. 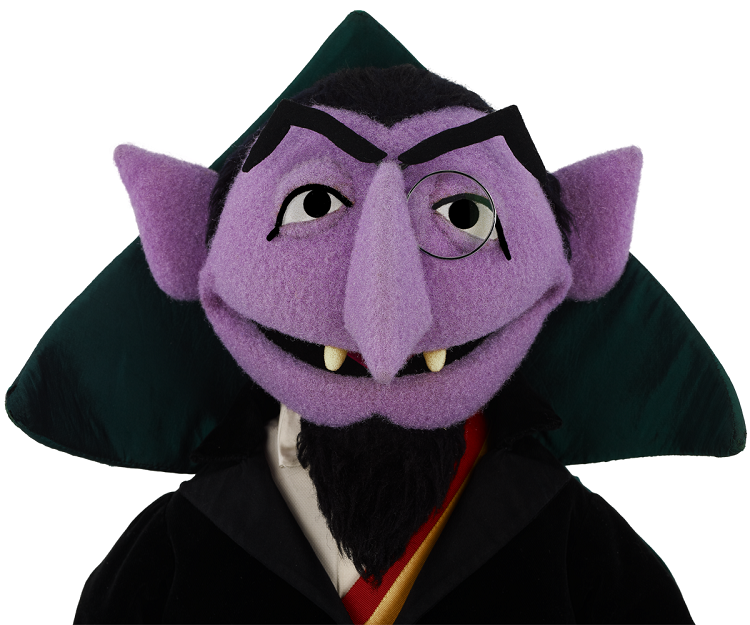 While he may be a nobleman, and while he may have a great accent to boot, Sesame Street’s Count von Count isn’t Hungarian.

And, for the record, Count von Count, resident vampire of the US Children’s show Sesame Street, doesn’t count as Hungarian either.

Do you know what similarity Karl Marx and Jules Verne share? Both of writers got a Hungarian name as well, as they are known as Marx Károly (Karl Marx) and Verne Gyula (Jules Verne) among Hungarians. (A quick not on Hungarian names- unlike other European languages, which use western name order, that is to say first name followed by last name, Hungarian employs eastern name order, meaning that last names come first). Although the Communist Manifesto and the Around the World in Eighty Days have so little in common that they “cannot be mentioned on the same page,” there was a period in the 19th century when it was a common to translate the names of foreign authors to Hungarian. This why some Hungarians to this very day may think Jules Verne/Verne Gyula or Karl Marx/Marx Károly were Hungarians. 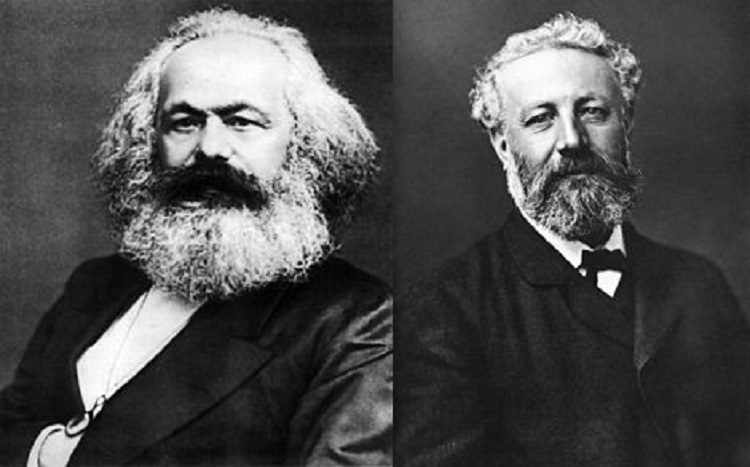 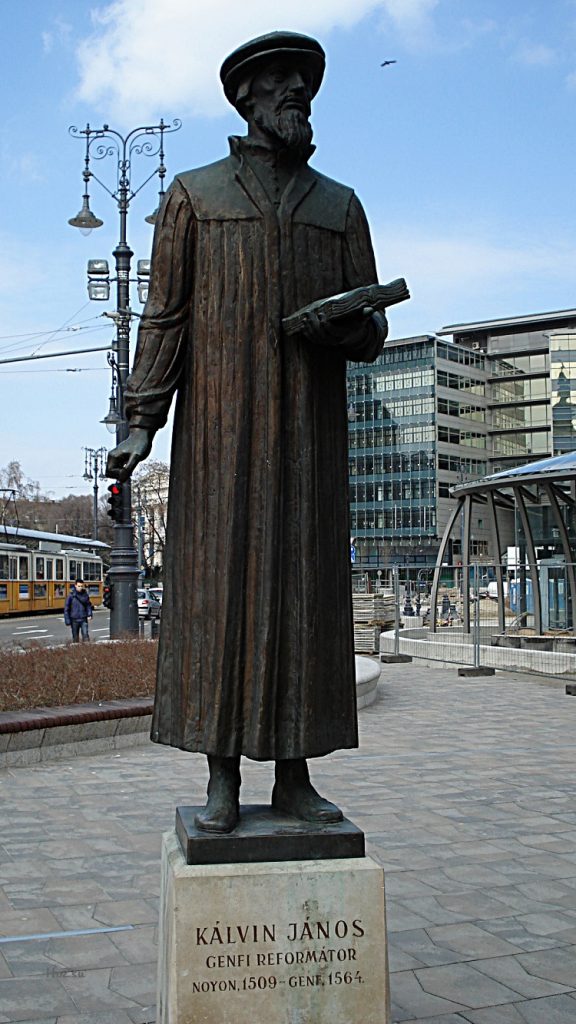 The statue of John Calvin in front of the Calvinist Church on Kálvin Square in Budapest.

Like the above-mentioned Jules ‘Gyula’ Verne and other historical figures whose names were ‘Hungarianized’ during the 19th century, Martin Luther (Luther Márton) and John Calvin (Kálvin János) saw their names Hungarianized as well. But while they may both be extremely important religious figures, neither of them were Hungarian, name-spelling to the contrary. Nevertheless, the Hungarianized names have stuck; and besides, both are very popular historical figures anyway. Even today, there is a square in Budapest named after John Calvin…sorry, Kálvin János.

Gerard or Gerard Sagredo (23 April 977/1000 – 24 September 1046) was the first Bishop of Csanád in the Kingdom of Hungary from around 1030 to his death. What a surprise but he has got a translated Hungarian name also: Szent Gellért. As he was from Italy benedictine monks who could speak Hungarian him to preach among the local inhabitants. Gerard’s martyrdom took place on 24 September 1046, during the Vata pagan uprising. According to a legend he was placed on a two-wheel cart, hauled to the hilltop and rolled down a hill of Buda, now named Gellért Hill, then still being alive at the bottom, was beaten to death. Other unverified tales report him as being put in a spiked barrel and rolled down the hill during a mass revolt of pagans. He was canonized in 1083 -along with St. Stephen and St. Emeric- and Gerard is currently one of the patron saints of Hungary. 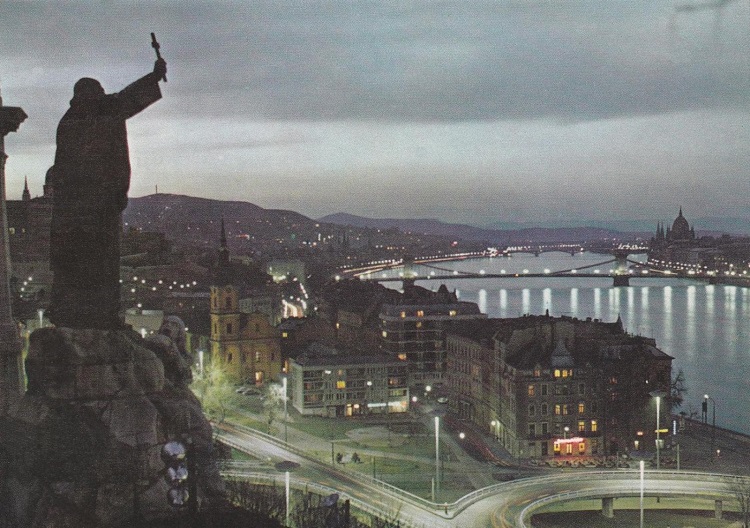 The Szent Gellért statue at the Gellért Hill above Budapest 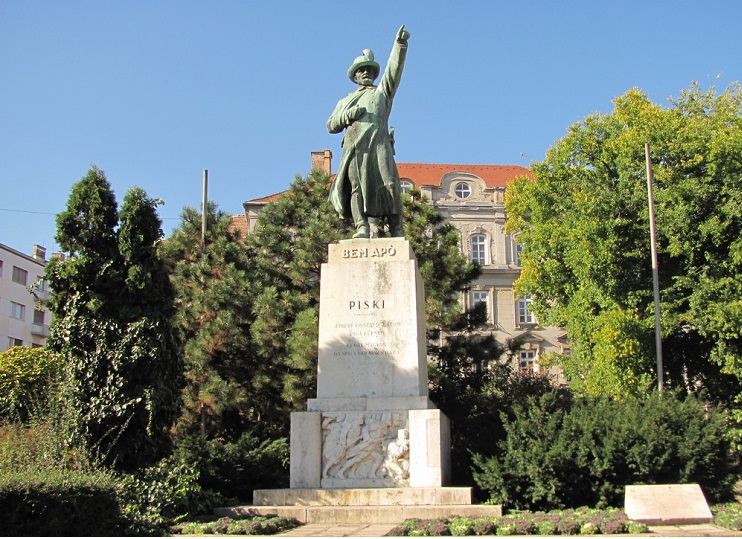 Interestingly enough, one of the most important generals who fought for Hungary’s independence against Austria in 1848 was not Hungarian at all. Remembered in Hungarian history, and by his revolutionary troops, as ‘Bem Apó’ (Father Bem), Józef Zachariasz Bem was born in Poland in 1794, and would go on to take prominent roles in two separate revolutions over the course of the 19th century. First, he served as an officer in Poland’s November uprising in 1831 against Tsarist Russia, then almost twenty years late reprised this role, volunteering his military skills to the Hungarian revolutionaries led by Lajos Kossuth in 1848. He fought skillfully and valiantly against Austrian forces, only to see the Hungarian Revolution crushed by the same Russian forces that had defeated Poland’s abortive revolt decades earlier. Following the revolution’s defeat he fled to the Ottoman Empire, where, since two taking part in two separate rebellions clearly wasn’t enough adventure for one lifetime, he adopted Islam and became the Ottoman Governor of Aleppo, adopting the name Murad Pasha. But while the revolutions he fought for may have ended in defeat, and while he may not have been Hungarian, he is nevertheless remembered, deservingly, as a hero in both Poland and Hungary today.

Adam Clark….or is it Clark Ádám?

Once you reverse the name order and remove the accent marks, this one might be one of the most obvious on the list. Clark Ádám, or Adam Clark, was a Scottish engineer, the man responsible for overseeing the construction of the first bridge to link Buda and Pest, the world-famous Lánchid (Chain Bridge), as well as the creation of the tunnel on the Buda side of the bridge that, when completed, allowed travelers to move from Pest straight into the heart of Buda. Completed in 1849, the Chain Bridge remains one of the most popular symbols of the Hungarian capitol to this day.

And while he may not have been Hungarian, his magnificent creation has ensured him a place in the Hungarian historical pantheon; to this day, the square on the Buda side of the Chain Bridge bears his name, or at least its Hungarianized version, Clark Ádám. 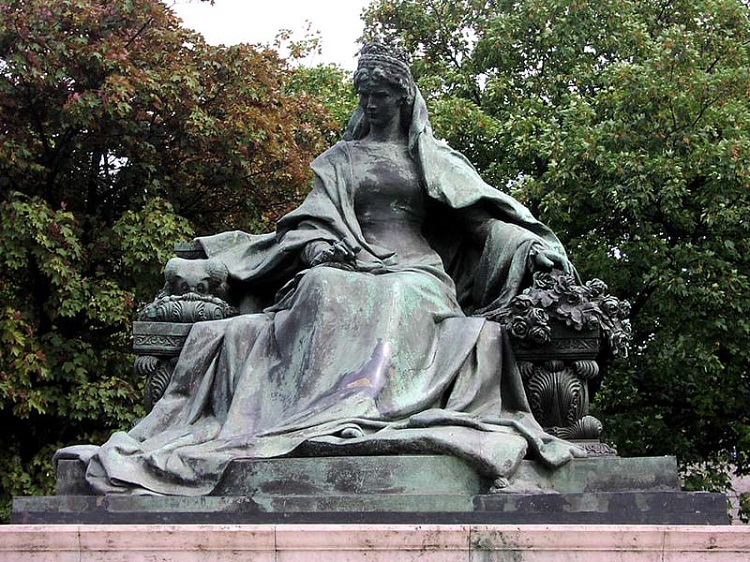 Statue of Sissi, located near the Elizabeth Bridge in Budapest

Yes, she was Queen of Hungary. Yes, there is still a bridge in Budapest named after her. And yes, she did manage to learn some Hungarian during the decades she reigned by her husband Emperor-King Francis Joseph’s side. But while she was certainly more popular than her whiskered, surly husband, and while she still holds a special place in Hungarian collective memory even today, Empress-Queen Sissi was not even remotely Hungarian. Born Elisabeth Amalie Eugenie von Wittelsbach, she was the daughter of a minor branch of the Bavarian royal family. In reality, then, no matter how popular she was among her beloved Hungarian subjects, she herself was not one of them. Despite that fact, though, her place in Hungarian history is strong enough, and she herself has remained popular enough, that one could argue that she was at least an honorary Hungarian of sorts.

10. Garay, but not the Hungarian poet and author?

Ezequiel Marcelo Garay González (10 October 1986) is an Argentine professional football player who plays for Spanish club Valencia CF and the Argentina national team as a central leader. However the name Garay sounds like a Hungarian name the Argentinian footballer has got no connection neither to the poet and author, who was born in Szekszárd in the 1800s, nor to the owners of the Garay Terrace Residencies of Budapest. 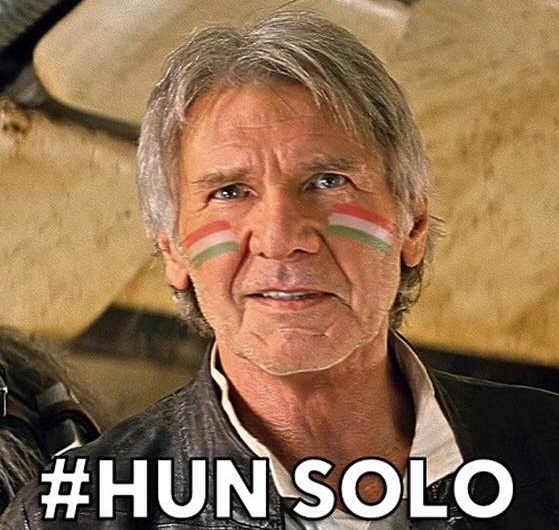