Thirteen: The Execution of the Martyrs of Arad 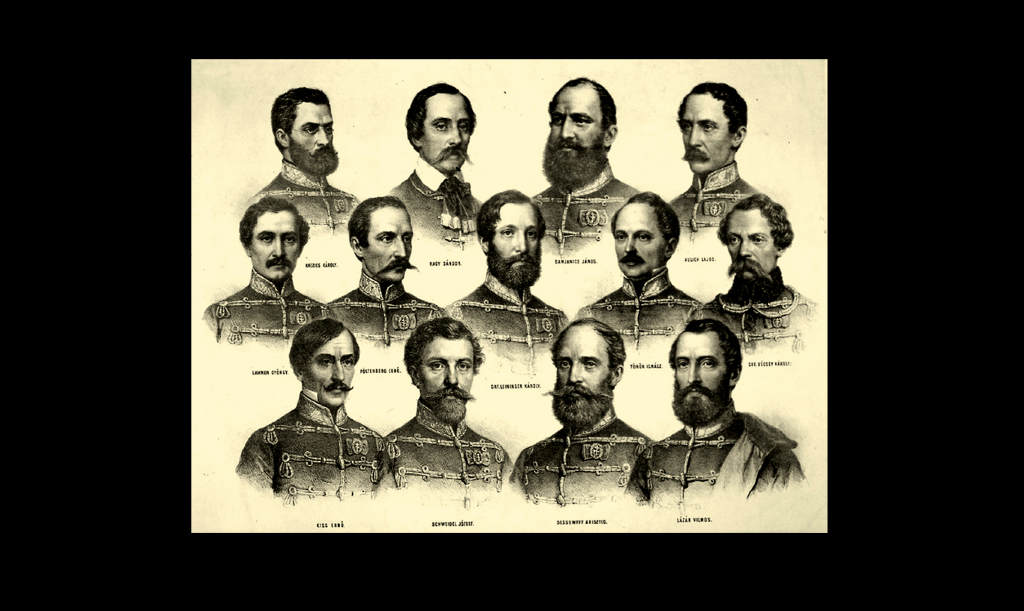 Arad, 1849. The morning of October 6th, just before 7 in the morning. This moment, chosen by Julius Jacob von Haynau, Austrian general and military governor of a defeated Hungary, was a symbolic one, as it was the one-year anniversary of the outbreak of the Vienna uprising. On this day, 13 military leaders of the failed Hungarian War for Independence, the ‘martyrs of Arad,’ would be executed in a painful and humiliating fashion. At daybreak, soldiers were placed on high alert. Artillerymen stood behind their cannons with burning wicks atop the city walls. They were afraid of Arad’s citizenry—as some of those to be executed were particularly popular in the city—and for this reason, the executions were to take place on the southern side of the Maros River, and crossing it was forbidden. 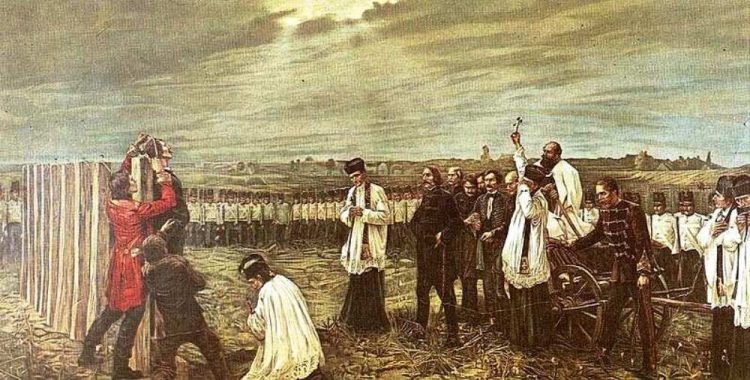 The pronouncement of sentences, as well as the order and nature of the executions, were thoroughly planned out beforehand. First Colonel Vilmos Lázár, Colonel Arisztid Dessewffy, General Ernő Kiss, and General József Schweidel, all four of them in civilian clothing, were lined up at the foot of the city wall. There, a twelve-man execution squad was lined up in front of the Hungarian officers, three to each. After the officers were blindfolded, an officer gave the order to shoot with a wave of his sword. After the shots rang out, three of them slumped to the ground, bloodied and mortally wounded, while Kiss was hit in the shoulder. Despite this, however, imperial troops gave no mercy. Three soldiers stood directly next to the kneeling general, and shot him once again. From this distance, the Temsvár-born patriot had no chance of surviving the second round of bullets. A pause followed, while the remaining nine generals were brought out of their cells.

The second round of killing began at 8am. The hangmen had the following routine: the prisoners were placed on a stool, where the executioner tied the knot, after which his two assistants removed the stool and pulled the condemned man downward, while the executioner tried to break his neck. In this way, the death throes of the martyrs were slow and drawn-out, to the joy of Major Josef Tichy, who had a deep personal hatred for Damjanich, with whom he had served in the same regiment until 1848.

General Ernő Poeltenberg was the first to be led to the gallows. His lengthy struggle showed the rest of the martyrs the kind of death that was in store for them. Poeltenberg was followed by General Ignác Török, then, in order, György Lahner, Károly Knezić, Jozsef Nagysándor, Count Károly Leiningen-Westerburg, Lajos Aulich, János Damjanich, and finally Károly Vécsey, who was forced to watch all of his comrades’ executions before going to the noose himself.

Even in their final moments, the martyrs of Arad showed their nation and the world the exemplary nature of Hungarian freedom fighters, who were viewed by many on the imperial side as little more than subversive trash. 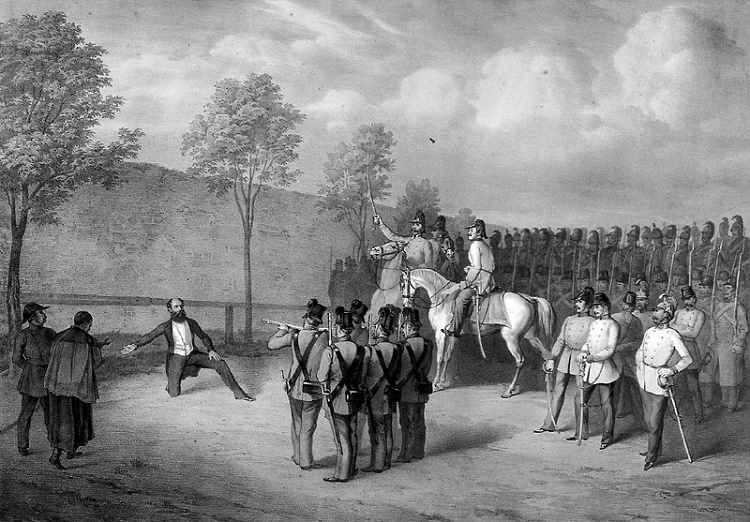 At dusk on the 6th, in Budapest, Count Lajos Batthyány, Hungary’s first Prime Minister, awaited his execution. He was killed in the courtyard of Pest’s New Building, where, in front of the imperial firing squad, shouted, with his last breath, “Love live the homeland! Come on, huntsmen!”