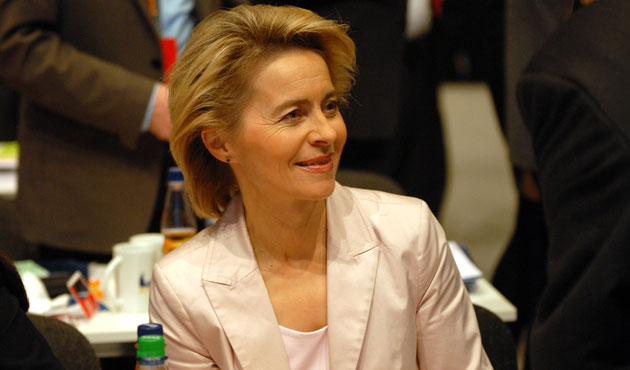 Donald Tusk, President of the European Council, in a Twitter post announced on Tuesday that after three days of negotiations, the heads of state and government of the EU finally agreed on who the new leaders of the most important EU institutions will be. It struck many as a surprise that in European politics a relatively unknown person, German Defence Minister Ursula von der Leyen, was named to replace Jean-Claude Juncker as head of the Commission. Some sources say that the idea came from Emmanuel Macron, while Hungarian state secretary Zoltán Kovács stated it was the Visegrád Four countries that came up with the proposition. The government sees the nomination as a clear victory in spite of the fact that the German politician has been critical of the Visegrád governments numerous times.

For a long time, Von der Ley was considered as a potential successor to Angela Merkel, and according to Spiegel, she is Germany’s second most powerful woman.

Born in Brussels, the 60-year-old Ursula von der Leyen moved to Germany when she was only 13. She is the daughter of Ernst Albrecht, former governor of her home state of Lower Saxony, who before that was a senior European civil servant.  She studied economics and medicine before entering politics.

In the past fifteen years, she has been constantly in a leading position in the Merkel governments. As minister for families in Merkel’s first Cabinet from 2005 to 2009, she introduced benefits that encouraged fathers to look after their young children. Von der Leyen – mother of 7- then served as labor minister until 2013, when she became Germany’s first female defense minister and holds the position to this day.

With her progressive views, she opened the Christian Democratic Union (CDU) to left-wing voters: she supported the increase of room in nursery schools, the introduction of women’s quota in the governing bodies of companies, and defended the institution of gay marriage and the national minimum wage.

Von der Leyen, a member of German Chancellor Angela Merkel’s conservatives (CDU/CSU), would be the first female Commission president if confirmed by the European Parliament. Her nomination needs an absolute majority of the chamber’s 751 members to be accepted.

According to AFP, French president Emmanuel Macron originally brought up von der Leyen’s name to German Chancellor Angela Merkel on Monday. Later it turned out that Germany and France also support the current German Defense Minister. Two diplomats claimed to Politico that the V4 countries supporting Ursula von der Leyen were part of the agreement between the Visegrád countries and Germany.

In line with Politico’s information,  Zoltán Kovács, State Secretary for International Communication and Relations, in a Twitter post, emphasized the Visegrád Four’s growing strength and influence over the direction of the EU. According to Kovács, the unity of the V4 once again showed their increasing strength and influence on EU processes: first, they defeated Manfred Weber and then overthrew Frans Timmermans. The state secretary claims that it was the Visegrád four who put the package on the EU table that was accepted Tuesday. Zoltán Kovács also confirmed that the four Visegrád countries support Ursula von der Leyen’s nomination as President of the European Commission.

1/2 In our unity, the Visegrád Four have again demonstrated our growing strength and influence over the direction of EU. After defeating Weber, the V4 prime ministers have toppled Timmermans as well. As negotiations continue…

In an interview, Viktor Orbán said that two politicians were considered for EC head who would have been “more than bad” for Hungary, as they had demonstrated that they did not respect the country or its citizens. Their nomination was successfully “thwarted,” he said, and they were replaced with a German mother of seven, which “…in itself shows that change is afoot in Europe.”

While the Hungarian government supports Ursula von der Leyen, it is still unclear what Fidesz’s notion is with her election, as she has often criticized the Orbán government and the leaders of the Visegrád countries.

In an interview, in reaction to Hungary closing the southern border in 2015 at the time of the peak of the migration crisis, she said it was unacceptable and contrary to existing European rules that Hungary had set tear gas and water hoses against refugees.

“This is not acceptable and this is against the European rules that we have. Therefore it is very important that we stick to the respect [where] human dignity and human rights are concerned,” said Ursula von Der Leyen. According to a report, Ursula von der Leyen even took a Syrian refugee home in the fall of 2014. We should engage in a dialogue with Poland and Hungary on “common values,” she said on a talk show in 2017.

She is also an advocate of the United States of Europe, while Fidesz strongly opposes this idea. According to von der Leyen, a United States of Europe would be “run along the lines of the federal states of Switzerland, Germany or the USA,” as the German politician sees it a good opportunity to capitalize on Europe’s size by agreeing on core issues relating to finance, tax, and economic politics.

It’s hard to tell what the Orbán government will gain with the possible election of Von der Leyen, but one thing is certain: this result is better for Fidesz than many might have speculated not long after the EP elections. The government clearly promotes it as a victory. According to Orbán: “An important victory has been achieved but new debates keep coming up in international politics.”  He added, “At least now we have the strength to stand up for ourselves,” possibly knowing that his relationship with the new EC president will not lack conflicts.