The memorial plaque of Hungarian-Transylvanian mountaineer Zsolt Erőss, the first Hungarian to have climbed Mount Everest, placed at the top of Oltár-kő in Békás-Szoros (Bicaz Gorge) in Hargitha county, Transylvania has been removed by persons unknown.

The black marble plaque inscribed with an Albert Wass quote was placed on the Oltár-kő where Erőss’ career first began and appeared one and a half months after Erőss and his partner Péter Kiss perished after summiting Kangchenjunga. In 2013, the pair became the first Hungarians summiting the peak. It was fixed with strong iron screws and was most likely removed with an angle grinder.

There is a strong suspicion that the perpetrators were the Neamt county gendarms; they are known to have placed a huge Romanian flag on the 1156-meter-high peak in the Hagymás mountains in celebration of the centenary of the country. However, the gendarmerie denies they were the ones who removed the plaque, saying that when they were on the peak this past week the memorial hadn’t been in its place.

Rock climbers noticed the disappearance of the plaque during the weekend. There are several other plaques placed at a lower altitude which commemorate mountaineers from Romania, Hungary and other countries as well, but none were removed. The Erőss memorial plaque was probably taken or dropped into an abyss, but the Hargitha county climbers still haven’t found any pieces.

On Wednesday, the Harghita county climbers will climb the peak once again to look at the damage and, as soon as possible, replace the plaque.

The Story of Kossuth County in USA 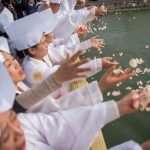