The Chef Who Collects Knives and Wives: Interview with Lajos Bíró 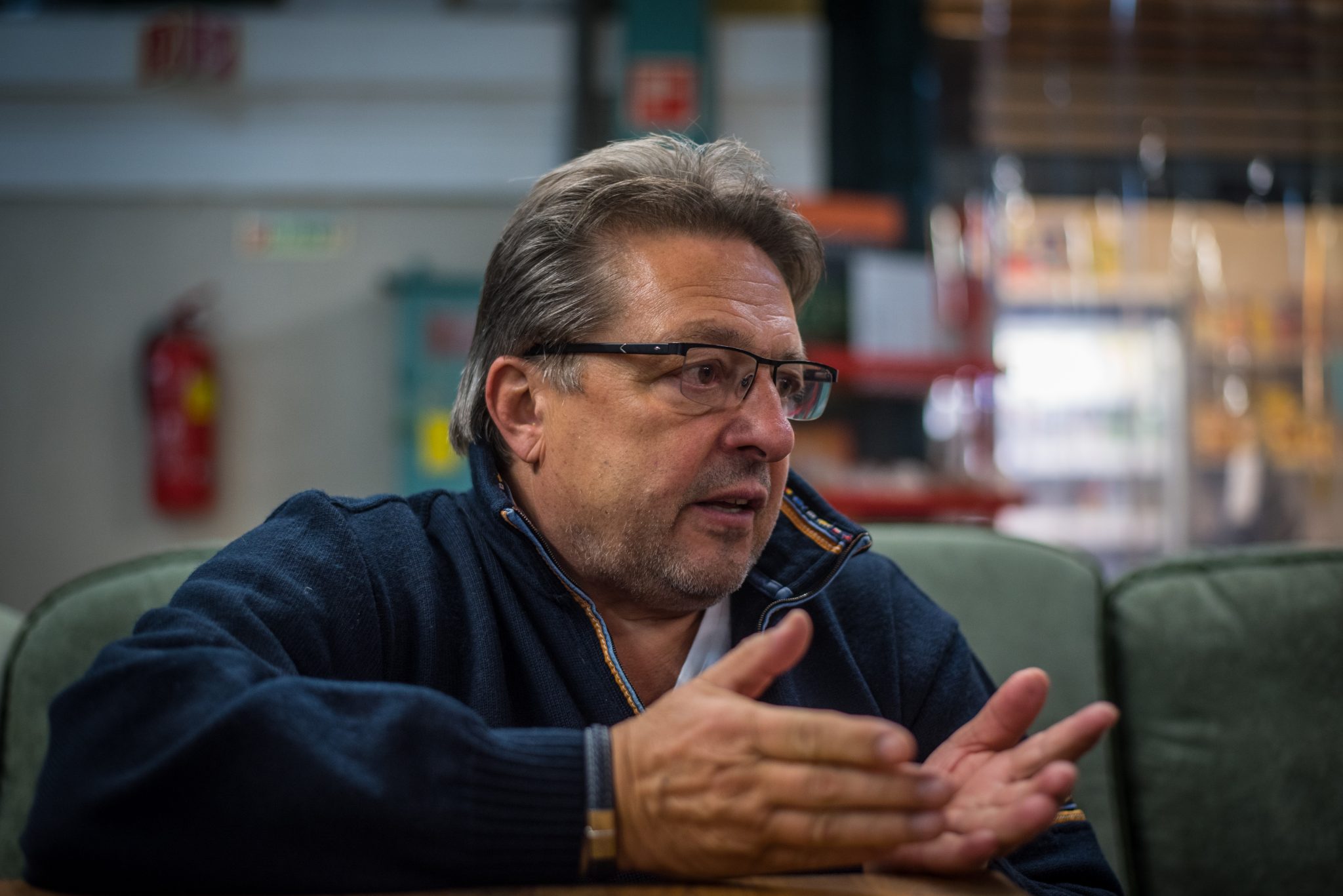 When I searched for Chef Lajos Bíró’s name before the interview, every adjective I came across were either extreme or negative — outrageous, outspoken, arrogant, sassy. Not to mention, commenters constantly point out his straightforward style, use of swear-words and proclivity for messing with others. It’s no wonder he titled his first book I’m Too Much.

Hungary Today recently had the opportunity to sit down with the chef at Budapest’s bustling Downtown Market, where he is about to open his fourth venue following the success of Séf Asztala and Buja Disznó(k), his joint project with Panificio il Basilico and his two other restaurants, Bock Bistro in Pest and Kisbíró in Buda. Lajos Bíró spoke in detail about his beloved profession to which he claims to owe everything, the Bocuse d’Or and the challenges — such as the reformation of Hungarian gastronomy and chef training methods — standing in the way of Hungary’s success in the international gastronomic scene.

You titled your first book I’m Too Much and it seems that most of the people on the internet agree with you. Is this the real you or is it just for the sake of marketing?

I am like this… and of course, I play a bit. I like to mess with people, I like to be a bit outrageous and I like when they talk about me. And the truth is, I’ve been very long at an age and in a position where I don’t really care what other people think about me. I don’t give a sh*t. Whatever I believe in, no matter what it is, I will carry it out and stand by it. I gave a presentation at Gastronomika and they made a short video about me. They said two things characterize the chef the most: he was never modest because he did not need to be, and he collects two things: knives and wives.

Your straightforward style makes you a good fit for television, but you’re not on any cooking shows. Was this your decision or has no one approached you with the ideas?

Look, I was the first chef on television with Gianni. But, there are several reasons why I do not participate anymore. First of all, I’m too old to be on television; secondly, after the first shooting, I decided that I’m only willing to do live shows.

And if when it comes to you, that’s kind of dangerous…

For them it is, but I can only be myself in live shows. If anyone tells me to look a certain direction or not to curse, it’s not good. It’s not the same anymore. If the food is bad, I’ll tell you it is. I won’t sugar coat it. The shows out there right now have more in common with reality TV. The celebrities in them don’t even know where the kitchen is. It’s a mockery of the profession. I know these programs are not for us, the professionals, but are for ordinary people. Either way, they still don’t have any sense of reality. They are not concerned with true performance. 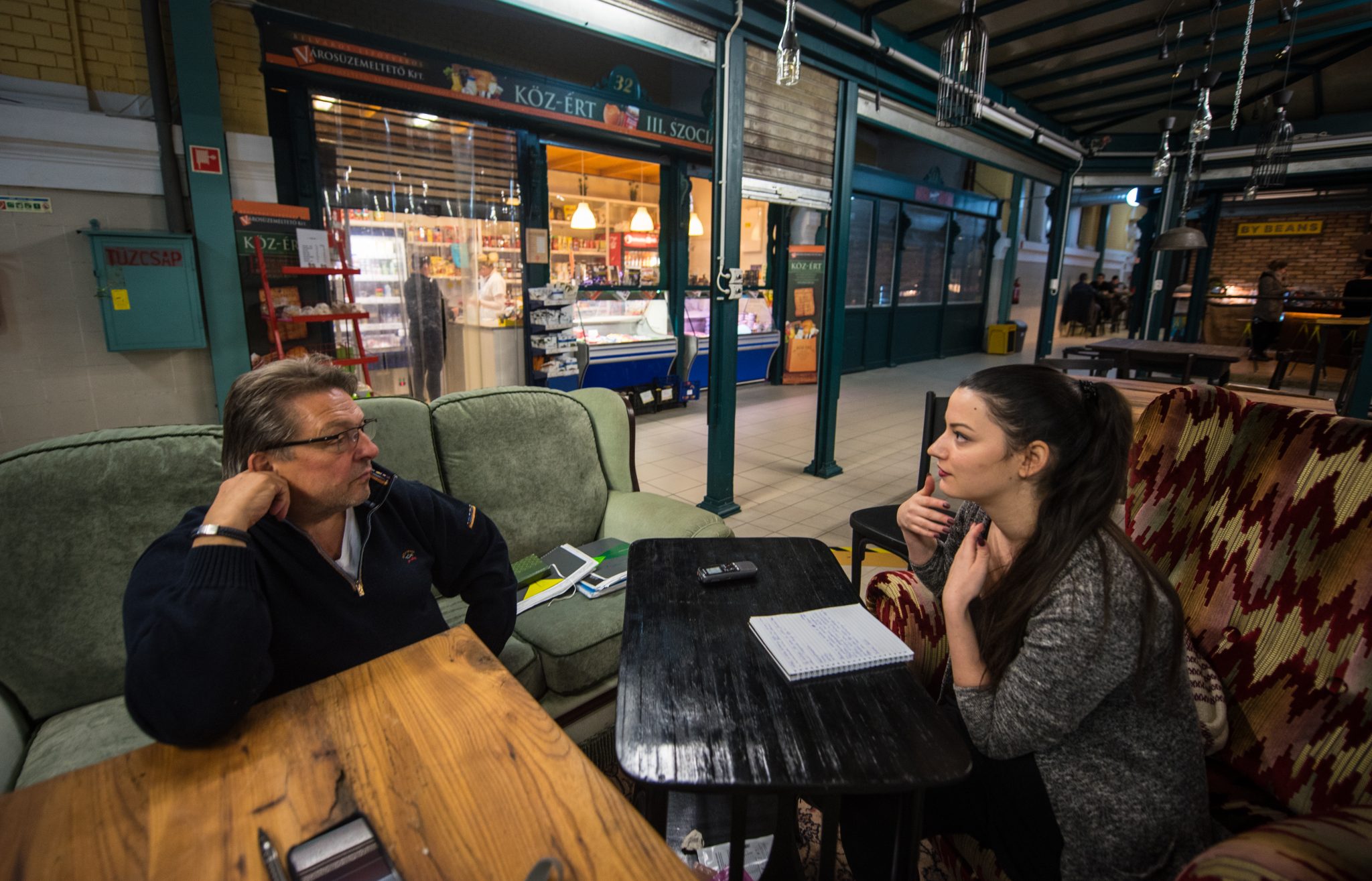 In the past 15 years, a so-called gastronomic revolution has been happening in the country. Is that still going on or can we say it’s over? Where are we in the process?

At the end of the 90s, around 2000, Tamás B. Molnár started something we now call a gastronomic revolution. We liked this and clung to it, but sadly, it got stuck somewhere. Then the Bocuse d’Or came, the big bang, and now we can say we’re in a good place. Thanks to the competition, we are now on the European gastronomy palette.

There are so many well-known chefs nowadays… Why not choose to advertise Hungarian gastronomy using a face or an influencer? Let’s say Tamás Széll, who won the European Bocuse d’Or?

Well, he is already a good face for Hungarian gastronomy in the profession and among journalists. They’re writing articles and producing content for ordinary people. When we first came to Lyon, Alex Atala, one of the best chefs in the world, came in and introduced himself to us. He knew nothing about us, and we couldn’t believe we were meeting and talking to him. Now everyone knows us. It’s natural that we have a place there.

So now international chefs, gastronomy critics and the profession as a whole recognize that Hungarian cuisine is great?

Yes, and more and more people are now aware of us professionally. For example, on the Bocuse d’Ors, we always host VIP shows. As a result, we are becoming part of the European and international gastronomic world. 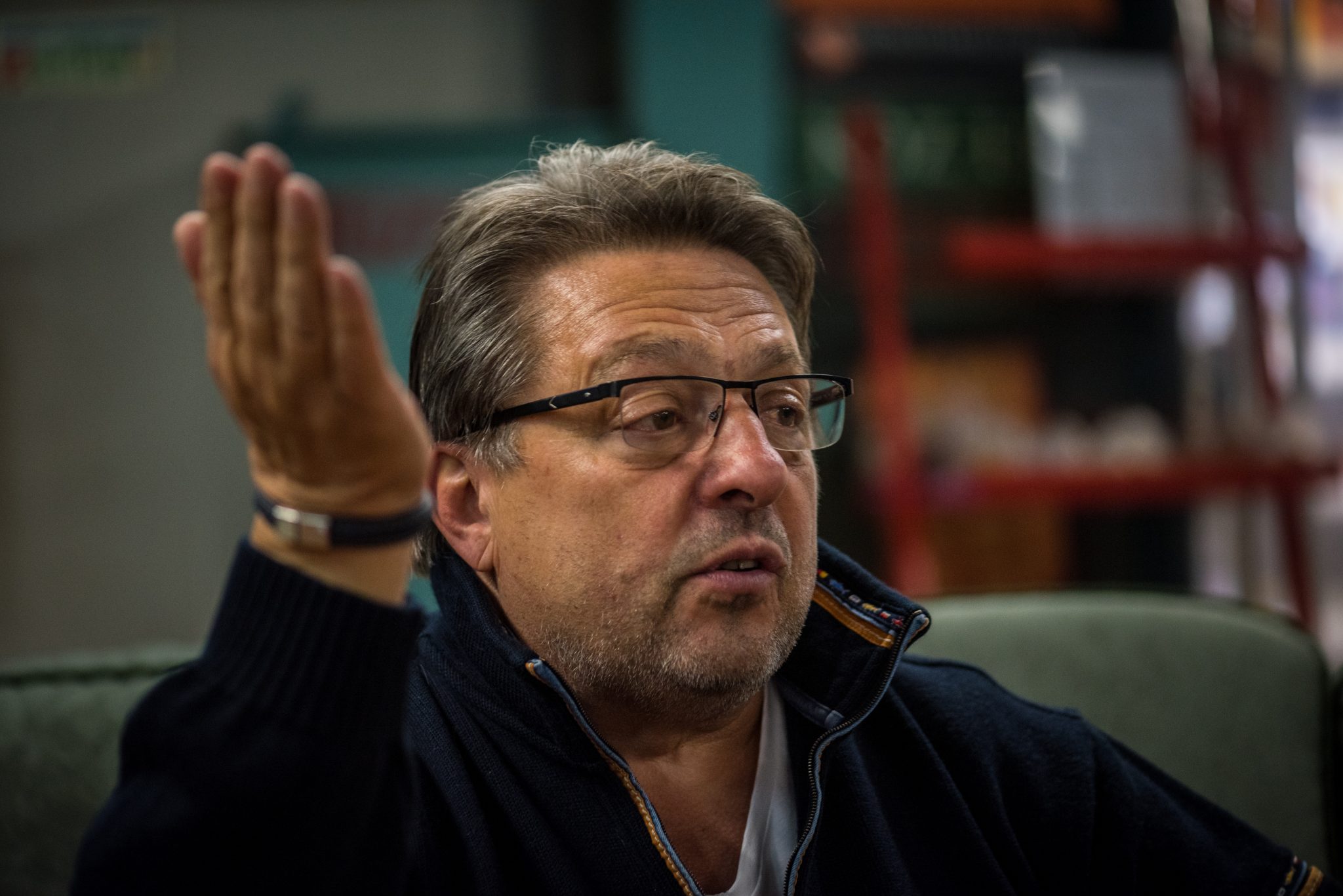 But if we take a look around Budapest, the city is filled with restaurants from other nations. If we go to any major cities in Europe, we won’t find a Hungarian restaurant, or at least not a prominent one.

No, you can’t find them anywhere. Those who want to open a Hungarian restaurant abroad are mainly nostalgic and insist on serving the old heavy, greasy Hungarian dishes. But in Hungary, you can find chefs who prepare these traditional dishes in a modern style. However, if I want to show foreigners the paprika chicken in its present state, then I won’t only serve the completely redesigned version, but the two together: the authentic and the reimagined. This way they can really see the difference.

Nowadays, we are always hearing about excellent restaurants opening in the countryside. Also, many big-name chefs from Budapest have moved to other parts of the country. Even so, there is still a significant part of Hungary that’s lacking good restaurants.

It’s true, but this is a problem all over the world–or at least in Eastern Europe. This is how it works here. For example, there are very good restaurants in Warsaw and Krakow, but I do not think fine dining is on the rise in Polish villages off the map.

So what, we just have to accept that? If this is the case in neighboring countries, then we must also comply?

No, of course not. But, we are way behind everyone else because of the communist regime, which hindered our gastronomy a lot. Unfortunately, we will not be able to make up for this, no matter what we do. The others are in front of us in every possible way and they have financial resources, which is important, as this is an expensive profession. Demagogues always bring up the number of medical supplies we could have bought for the price of Hungary’s participation in Bocuse d’Or. Yes, we could have bought a lot, but it’s another thing entirely.

It would be better to start from the basics. What do you think of the cooking training offered in Hungary? Your son is also a cook.

The Hungarian cooking training needs a lot of improvement. This is what we have been saying for 25 years, but the reformation still hasn’t begun. Those in charge of the schools are the same, traditional people who have always refused to let creative and innovative ideas in. Textbooks should be reformed; we need a new system to educate at least a hundred new instructors. The other problem is that the education necessary for our profession is expensive. Here in Hungary, children aren’t able to see even 10 different fish species during their three-four year-long education. My son studied at a culinary school in Lucerne. In the first two weeks, they became familiar with 70 saltwater and 40 freshwater fish. Coquilles St. Jacques cost around 17 thousand forints per kilo. After learning, they cooked 400 of them in school. Our Hungarian trainees probably haven’t even seen a picture of them. See the difference?

Many people are leaving the country either for training or for work and there’s a great shortage of hospitality.

Yes, but it’s hard abroad as well, if not harder. Many work 14 to 16 hours a day and their bosses eviscerate and dehumanize them. They aren’t able to develop professionally. It is only worthwhile to go abroad if you can master your profession while learning a new language. It may be hard, they may trip you up or break you, but after three to four years, if you learn the language and do your job well, then you can go wherever you want and be a chef. I don’t speak many languages, but if I did, I could have had an impressive international career. However, I focused on professional development instead.

Where do you get the inspiration for your recipes from?

I am a visual person; I mostly get inspired by books, pictures and newspapers. But I only borrow ideas, not the whole concept. If I see a photograph that reminds me of something, I’ll upgrade it and use it somewhere else. For example, here is an image of a pig lung stew. I would use the quail egg sunny-side up whites or the sour cream in another recipe. No one would be able to tell where I got the idea for this recipe from.

And your travels? Which cuisine have you loved the most?

I had never been to Japan, and I have to admit that I didn’t want to go, but we just came back and I loved it. We tried restaurants you can’t even imagine. There is a group of 25 emerging Japanese people in the business who work at the best restaurants and eat at each other’s places once every six months. Usually, you have to wait years to get a table in one of them, but we were able to eat in three of the restaurants. The respect, tradition and discipline of Japanese gastronomy are very inspirational. The flavors I discovered there have already filtered into my restaurants and the venues in the market. 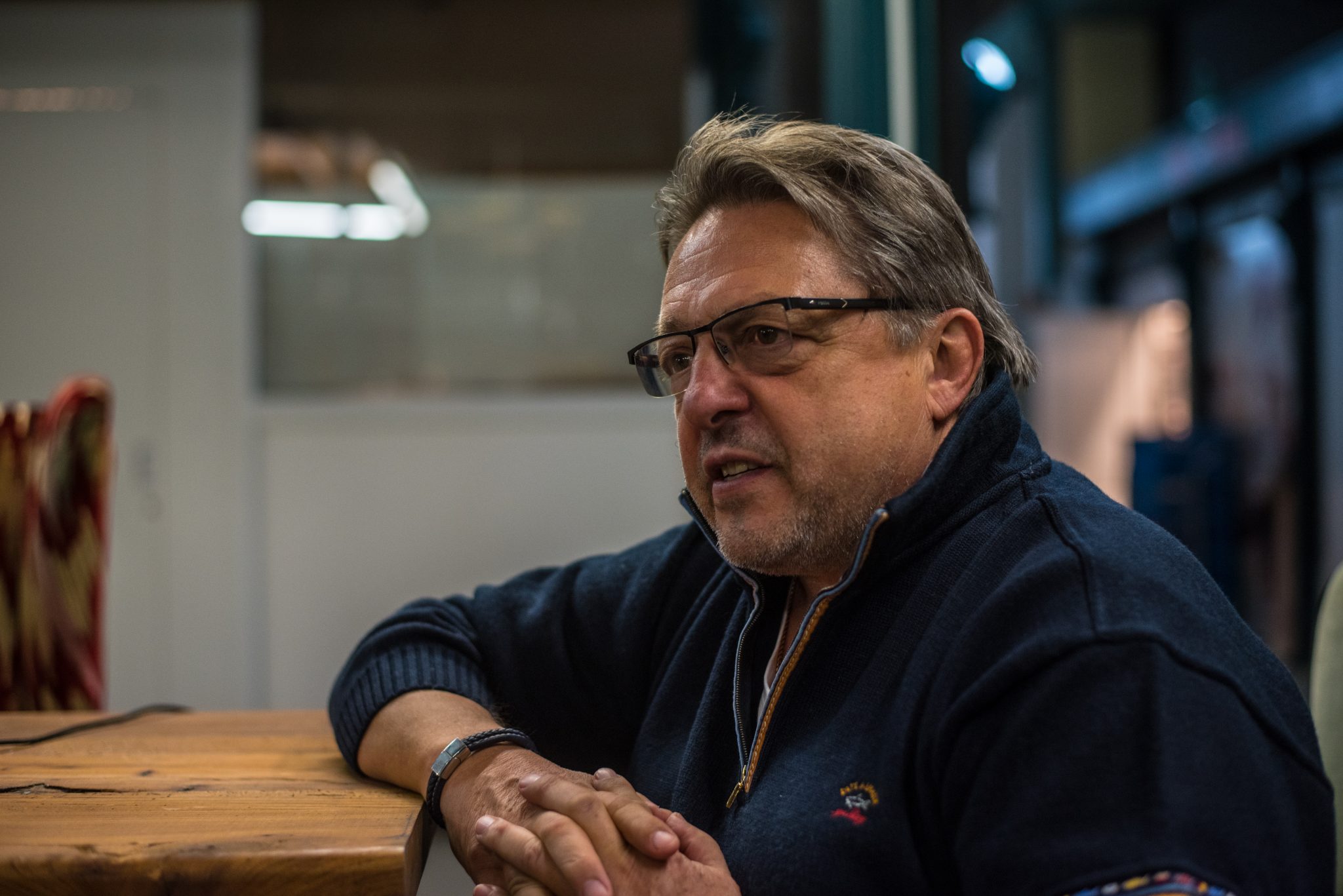 You’ve said in interviews before that if you were to get a Michelin star, you’d give it back. Isn’t it every chef’s dream to receive one? Is it even possible to give it back?

No, not at all. Many chefs give them back. For example, the Obauer brothers returned theirs–and they had three. True, they gave them back because they were offended that one was taken away. But, the star has consequences. It’s stressful to wonder whether they will come and take them away. If you lose one, it costs you a big price. It can easily ruin a restaurant in a moment. What’s more, the food and ingredients used must be kept at a consistent quality, which makes the place more expensive as well. The truth is that I don’t really deserve the Michelin star anymore. It would be good if I got it, but it would be even more sensational if I returned it a month later.

Is there anything missing from your life that you wish you had?

I’ve gotten everything I could want out of life: money, women, travel and art. I don’t have a bucket list because there’s nothing more I want. If someone tells me this profession is sh*t, he’s the biggest fool in the world because I owe everything to this profession. Don’t tell me it doesn’t feel good when you come out to your restaurant and they praise you for the food you prepared. In this business, failure comes immediately, but so does success. Back in the day, Tamás Molnár said that I use a lot of cream, which he considered an easy success. I said so what? I love easy successes.

Reporting and translation by Fanni Kaszás 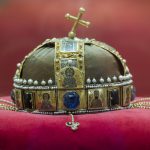