The Hungarian unit of UK retail chain operator TESCO will close 13 loss-making shops, mainly outside of the capital, from February, conservative daily Magyar Nemzet said on Saturday. Tesco Global Áruházak, which operates 222 units in Hungary, plans to close further shops later in 2015. Calculations show the 13 shop closures could lead to close to 1,000 lay-offs. The plans could be related to a recent increase of the supermarket oversight fee, the paper added.

In Hungary, Tesco and other major retailer were also hit with a steep rise in food inspection costs and a new law that would force the closure of loss-making chains after two successive years in the red, Reuters reported. Rival SPAR said last month it would scrap over half of a planned 59 million euro investment programme in Hungary in 2015, blaming recent tax changes targeting major players.

As bloomberg.com reported in December, store brands such as TESCO and AUCHAN are bracing for losses in 2015 as the Hungarian government added the effect of Sunday closures to an already approved levy of up to 6 percent on retail activities. SPAR, Hungary’s fourth-largest retailer with more than 400 stores, sees its taxes jumps 30-fold to 9 billion forint, head of Spar’s Hungarian subsidiary said. LIDL, which has 163 retail units in Hungary and employs 4,000 people, will pay almost 3 billion forint, compared with 151 million forint last year, the company told bloomberg.com.

At the end of 2014 the Hungarian Parliament also passed a bill on “implementing fair market practices”, which prohibits big supermarkets and discount shops from opening in the area of Budapest’s World Heritage sites. 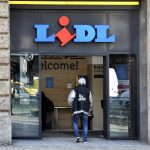