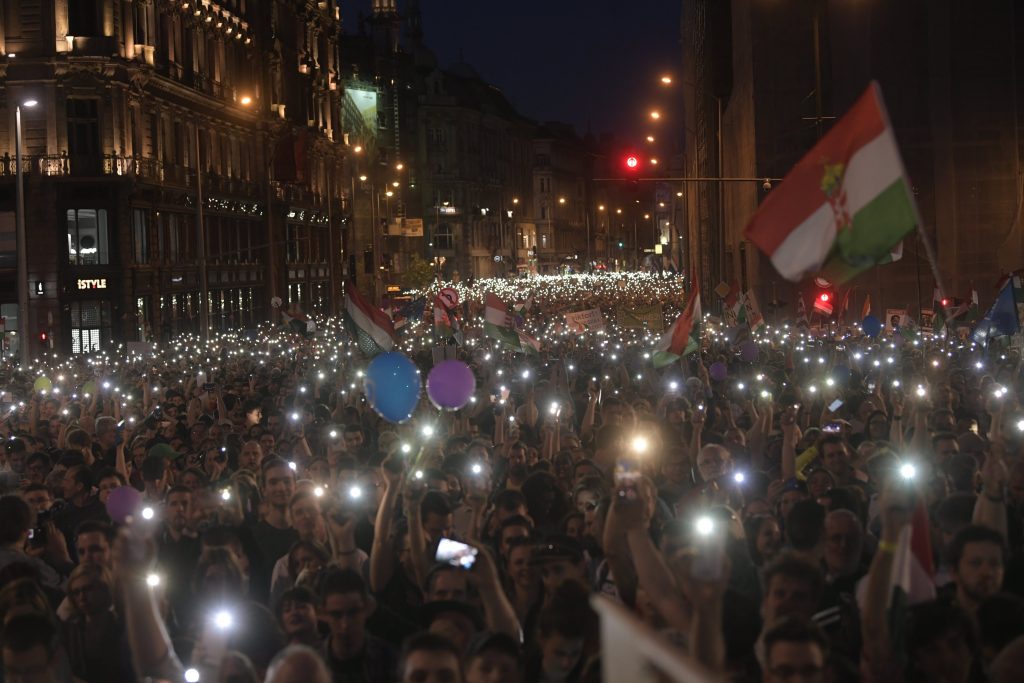 For the second weekend in a row, tens of thousands of Hungarians took to the streets in both Budapest in regional cities in order to protest against the state of the rule of law and press freedom in the country, a situation which they blame on the government of Prime Minister Viktor Orbán.

The event, titled “2.0 We are the majority! – Another protest for democracy”, came in the wake of last weekend’s anti-Orbán protests that drew an estimated 100,000 people to the streets of Budapest. 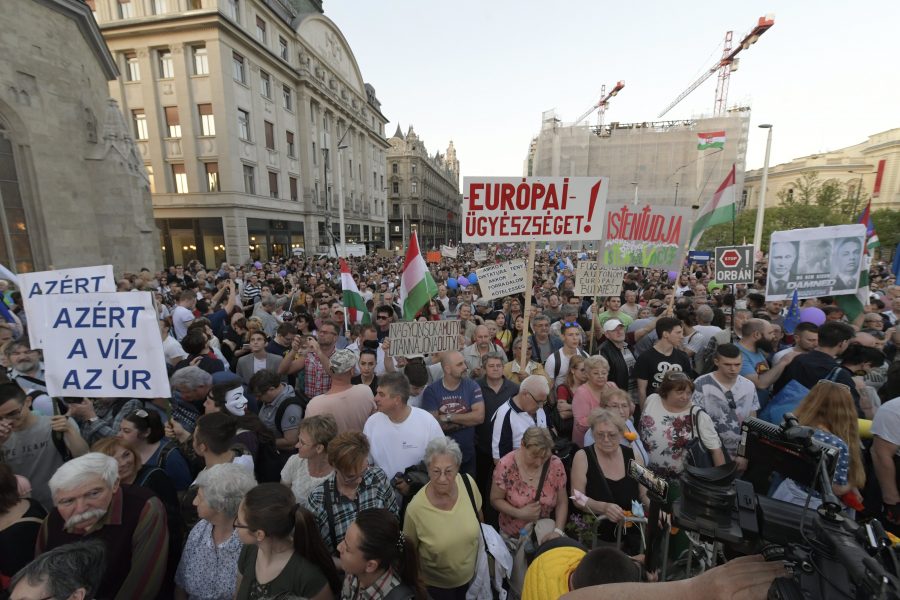 This past Saturday’s demonstration started in front of Parliament; from there, protesters made their way to Szabadsajtó (‘Press Freedom’) Street to hear speeches. International and domestic press outlets widely reported that “tens of thousands” took part in the protest, while the event’s organizers claimed that over 100,000 people were in attendance.

This week’s protests come in the wake of Fidesz’s major victory in the April 8th elections. In addition, the past two weeks have seen the closure of independent daily Magyar Nemzet and the online English-language site Budapest Beacon. It also comes just days after rumors began to circulate that the Open Society Foundations, a non-profit founded by Hungarian-American billionaire George Soros, will move its 100-person office from Budapest to Berlin in reaction to the Orbán government’s proposed “Stop Soros” legislation.

Fidesz has watered down the rule of law and stifled the press and this is why they have a two-thirds majority.

The also claimed that they would hold the county’s divided opposition parties to account for Fidesz’s victory and the current state of Hungary, as “they, too, are to blame for getting us to this point.”

Organizers also noted the series of corruption scandals that have swirled around Orbán’s ruling party, arguing

We have to fight together with them for a new, fair and just electoral law and the investigation of corruption cases…We … want to replace a regime…The regime of Orbán that is corrupt to the core and endlessly nefarious…

A number of opposition parties were represented at the demonstration. Once again, protesters ranged from right-wing nationalists to green party activists to pro-EU centrists; the one issue that united all those gathered was an opposition to what they described as the “demagogic” and “authoritarian” policies of Orbán’s government.

When the protestors at the front of the demonstration reached Arany János Street proceeding along Bajcsy-Zsilinszky Road, the last ones were starting out from Kossuth Square — a distance of around 1.1km. 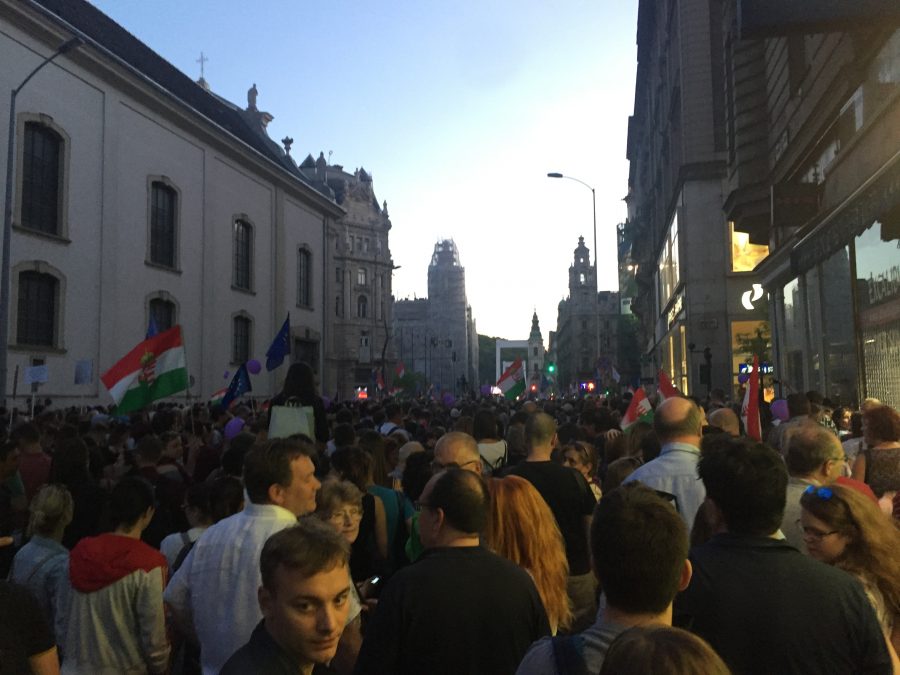 Speakers called for the opposition to unite, for civil organizations, and immediate action to unseat the government.

During the event, speakers argued that the Orbán government was only able to stay in power through a campaign of fear, and they called for an end to “the campaign of hate and lies” and for the establishment of a “fair” public media.

The demonstration reached its end at the Pest side of the Elizabeth Bridge, where a large stage was set up and where a number of speakers addressed the crowd gathered there, which stretched from the bridge all the way to Budapest’s Astoria intersection, a distance of over 700 meters. 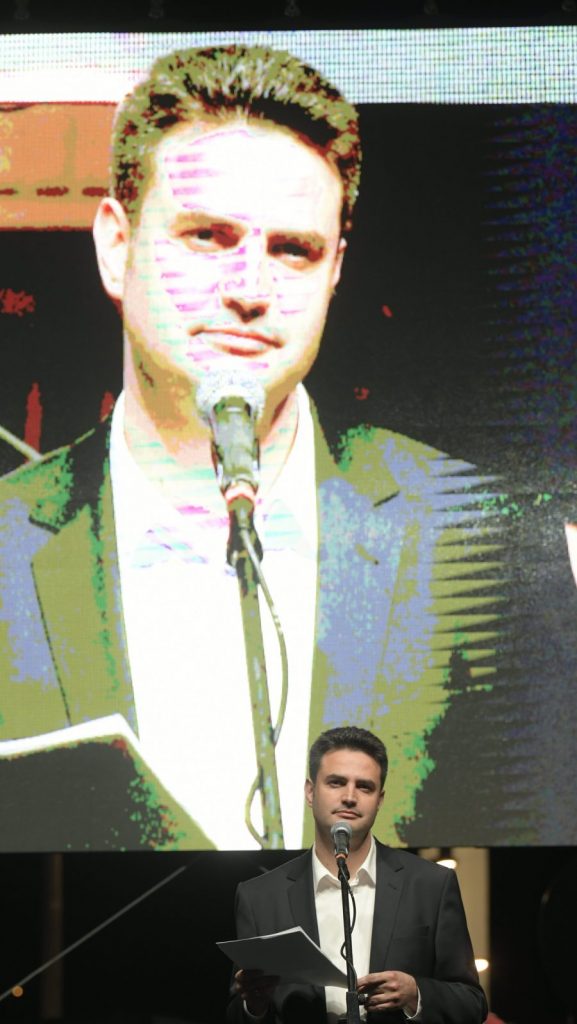 Hódmezővásárhely mayor Péter Márki-Zay speaking to crowds gathered at Saturday night’s protest against the Orbán government and perceived violations of press freedom and the rule of law in Hungary (Photo: MTI – Zsolt Szigetváry)

Péter Márki-Zay, the recently elected mayor of Hódmezővásárhely, in south-eastern Hungary, who won a surprise by-election victory in the Fidesz stronghold town, was the star speaker of the night.

Taking the stage, Márki-Zay claimed that the size of the crowd gathered before him showed that “there is hope…we are not alone.” Looking at the tens of thousands listening to him speak, the independent politician said that

There will be a new opposition, you are the new opposition! There is not one party that has 100,000 members. All of you can take part in building a new country, all of you have a role to play! History shows us that no oppressive system lasts forever, and it’s not even certain that we’ll have to wait four years for that to happen.

Márki-Zay said all opposition forces were bound by a peaceful coexistence on the basis of their support for democracy, the rule of law, a market economy and European integration. In order to replace the government, a single opposition candidate is required in each electoral district, he said, adding that the current holders of power had an interest in maintaining divisions within the opposition.

The recently-elected mayor made a point to recognize the opposition’s shortcomings; these parties, he argued, failed because they were unwilling to cooperate to defeat Fidesz, a fact which shows that they “we cannot trust our country to them.”

He went on to argue that Hungary “deserves an opposition that does not just reject corruption and fearmongering in words, but one that stands up for every Hungarian, that stands up in defense of national and European values.” He also claimed that this opposition would be one that conceived of a future “without Asian dictators,” a reference to Orbán’s well-noted moves to strengthen relations with strongmen and dictators such as Vladimir Putin, China’s Xi Jinping, and Turkey’s  Recep Tayyip Erdoğan. He added that

We must fight intimidation, and we must document all legal violations.

In conclusion, he warned that

we don’t have time to wait on the future, tomorrow never comes, the future is always tomorrow. When I think of this beautiful crowd, of this huge cooperation, the one word that comes into my mind is: NOW!

Throughout the afternoon, protesters shouted slogans such as: “Viktator!”, “Orbán, get lost!” “Fidesz mafia!” and “We are the majority!” 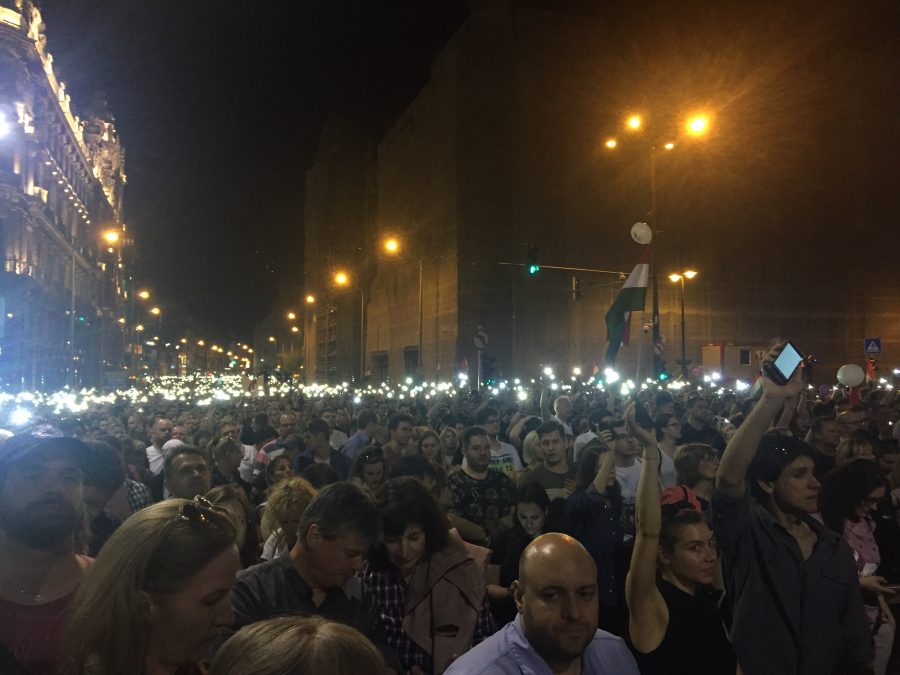