Szilveszter E. Vizi: No Pressure On NGOs In Hungary

No political pressure of any kind on Hungarian civil society has been perceived by us, academic Szilveszter E. Vizi, chairman of both the Friends of Hungary Foundation and the Hungarian Atlantic Council, has said in reaction to a statement by US President Barack Obama. Mr. Vizi aded that while a large amount of misinformation on the country appears in the foreign press, its achievements will improve Hungary’s image.

Speaking at the annual meeting of the Clinton Global Initiative in New York, US President Barack Obama named Hungary as one of the countries restricting civil society. As the head of a non-governmental organisation, what is your opinion on this?
The Hungarian Atlantic Council is one of the most important organisations of civil society, a genuine NGO. Its members hail from many different layers of Hungarian society and people of different convictions work together in it. I can safely state that we have not perceived any kind of political pressure or governmental influence.

These days, similar pieces of information appear also in leading US newspapers, which then have to be declared false by the Hungarian government. How are you able to improve Hungary’s image in the international press?
It is true that a very large share of information appearing in the foreign press is unfounded. Unfortunately, foreign papers adopt these pieces of misinformation from one another and these falsehoods concerning Hungary then slowly begin to spread. We are working hard to change this. For example, I am proud that the Ambassador of the United States to Hungary praised Hungary at the twentieth anniversary of the Hungarian Atlantic Council. CDU parliamentarian and chairman of NATO member states’ MEPs in the European Parliamnt Karl Lamers has, in turn, assured us of his friendship and support.

As it appears, this has not struck a chord with the US and German press. Even following this event, reports claiming that Hungary is lead by an extremist government have been published.
In spite of this, I am confident that these good relationships will change the world’s view of Hungary. A good example for this is that while the Hungarian economy continues to be negatively categorised in a number of cases, we nevertheless receive a great deal of investment. Getting the country’s economy back on its feet is indisputable if we take the German investors who bring capital and construction plants to our country. This success will have its affect on the press; mutual trust will evolve over time.

If we have happened to stumble upon trust, are your phone calls tapped in your impression?
Certainly not. Until this date, I have freely expressed and even set in writing all of my thoughts. I can hardly believe that it could be in the interest of anyone to tap my calls.

I am asking this because according to leaked information, the US intelligence services are engaged in major tapping operations with the cooperation of certain multinational companies. Is it possible that your calls are also tapped without your knowledge?
It is impossible to tap an infinite number of people. More precisely, data can be stored but it cannot be processed because an infinitely large number of people would be needed to do this. While fears concerning wire tapping could be well-founded, the possibilities of putting the collected information to use is minimal. The threat of terrorism is unbelievably high throughout the world and this is the major danger, not someone being tapped.

Supposedly Angela Merkel is of a different opinion. What kind of alliance is one that lacks even the trust not to tap the private telephones of member states’ leaders?
Unfortunately, in the 21st century we have lost the kind of trust that existed in classical diplomacy in earlier centuries, when the power of the word still meant somethings. Edward Snowden’s leaks have further worsened the situation, but it is pssible to restore trust between allies if certain events are judged along identical values and interests.

Now even this seems to be turning over as a consequence of the war between Russia and Ukraine. Many in the European Union say that economic sanctions are pointless and forced only by the United States while harming the European economy.
German newspapers also regard Germany as being the greatest loser in this economic war. However, it is also true that European, Christian culture has certain norms which one cannot ignore. For example, we cannot take something that is not ours or arbitrarily annect the territory of other countries. At the same time, the United States suffered a great physical and emotional trauma on 11 September 2001 and attempts have to be made to put an end to American people’s sense of threat stemming from this. We must help them in this.

Perhaps due to differences of interests, it has been raised at several NATO conferences whether this is a genuinely existing alliance at all. Does such a thing as NATO still exist or, in substance, is it only the military power of the United States?
At present, it is true that Europe only contributes a meagre share to NATO’s military force and it is therefore constantly raised that European member states should spend a sum equalling two per cent of the annual GDP on their military and modern weaponry. It is a fair expectation of the US that the other member states should spend at least approximately the amount on defence as they do.

Could this situation lead to NATO practically acting in accordance with US military objectives, interests and fears even though Europe does not always agree on everything with the United States?
The United States continues to boast the world’s most modern army. However, it does not only keep its own interests in mind. In connection with the war in Ukraine, for example, it needs to take account of the interests of its ally, Poland, the fears of which are justifiable if only for its history. The forty-million-strong Polish people have been occupied and their country eliminated by, among others, the Russians or the European great powers with their assistance. However, common interests also exist, such as the already mentioned European culture which also characterises North America because statehood was established there by Europeans.

European politicians have also voiced the opinion that teasing the Russian bear was unsensible because Russia could be neded in the struggle against the Islamic State.
Sooner or later, Russia will have to realise that it has to take a stand against the aggessive form of Islam. When the Soviet Union fell apart, the followers of Islam were the first to split from the empire and the republics founded by them “keep the gunpowder dry” because they are great adversaries of any Russian intentions of reunification.

How can the nongovernmental sector help in halting the spread of terrorist extremisim?
The task of the Hungarian Atlantic Council is to establish and maintain relations between citizens and NATO. For example, we organise road shows to ask people’s opinion. At these, we are asked questions such as why did Hungarian soldiers have to die in Afghanistan. We then explain the dangers the spread of terrorism could have in Europe and, more closely, Hungary. People have to be convinced that the sense of security is not self-apparent and the community we call the North Atlantic alliance or NATO also plays a great role in this. 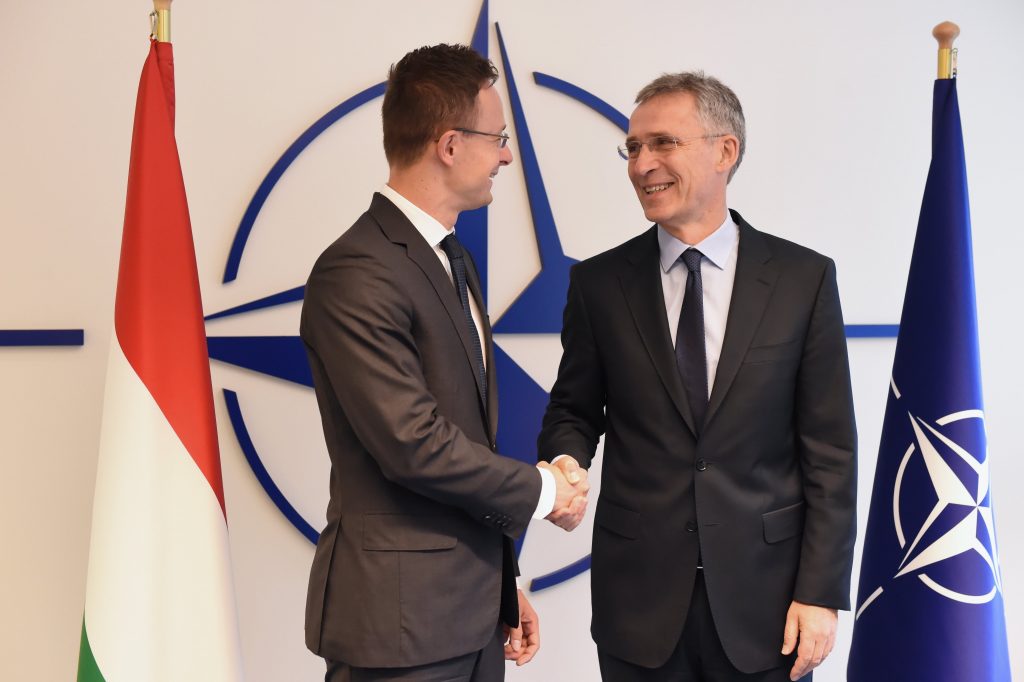 Hungary will comply with NATO‘s decision concerning a military pullout from Afghanistan, Péter Szijjártó, Hungary’s foreign minister, told MTI before a special ministerial session of NATO on Wednesday. Szijjártó said he agreed with the approach that the simultaneous entry of NATO troops into Afghanistan should be followed by their simultaneous withdrawal. Hungary used to station […]
MTI-Hungary Today 2021.04.15.

Hungary does not consider Russia poses a direct security threat to its territory but understands and respects that other NATO member states think differently, Foreign Minister Péter Szijjártó said in Brussels on Wednesday after a two-day session of NATO foreign ministers. As a committed NATO member, Hungary has always been loyal to its allies, Szijjártó […]
MTI-Hungary Today 2021.03.24.