Hungarian troops of the multinational Engineer Battalion Tisza stand ready to be deployed at the call of Ukrainian authorities to help in the flood-hit western regions of Ukraine, the foreign minister said on Facebook on Friday.

Hungary has offered to help its neighbour with rescue operations and flood defence, Péter Szijjártó said.

The Hungarian-Romanian-Slovak-Ukrainian Tisza Battalion’s task is to help rescue people and participate in defence operations in the instances of natural and ecological disasters.

Hungary, Ukraine to Reopen all Road Border Crossings on Monday

The flood has affected Ukraine’s western regions including Ivano-Frankivsk where it has claimed three lives. 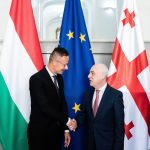