Hungarian Foreign Minister Péter Szijjártó on Monday said China and Hungary strove to restart economic cooperation after a setback due to the coronavirus pandemic this spring.

Szijjártó told a joint online news conference with his Chinese counterpart that cooperation was valued on both sides. The talks during his visit focused on setting up a schedule to restart cooperation, he said.

China is Hungary’s second most important source of imports, and Chinese companies have invested over five billion dollars in the country so far, the minister noted. Bilateral ties are key to the Hungarian economy making a speedy recovery, he said.

The cooperation between the two countries’ national banks will be expanded to boost financial stability, he said. The Chinese development bank is set to become the fourth Chinese bank to open a representation in Hungary, the minister said. New investments are also in the pipeline, Szijjártó said, adding that chemical company Wanhua is planning to invest 300 billion forints (EUR 853.8m) in Hungary over the next five years.

Szijjártó thanked China for its help during the pandemic. The delivery of more than 90 million masks, 40 million protective suits and 800,000 doses of medication on 185 planes from China were key in Hungary’s successful defence against the pandemic, he said.

Chinese Foreign Minister Wang Yi said Szijjártó was the first foreign minister to visit China after the lockdowns due to the pandemic. The visit is of great importance in restoring cooperation, he said. Hungary and China see each other as important partners, and both are committed to boosting mutually beneficial cooperation, he said. 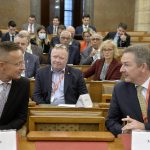