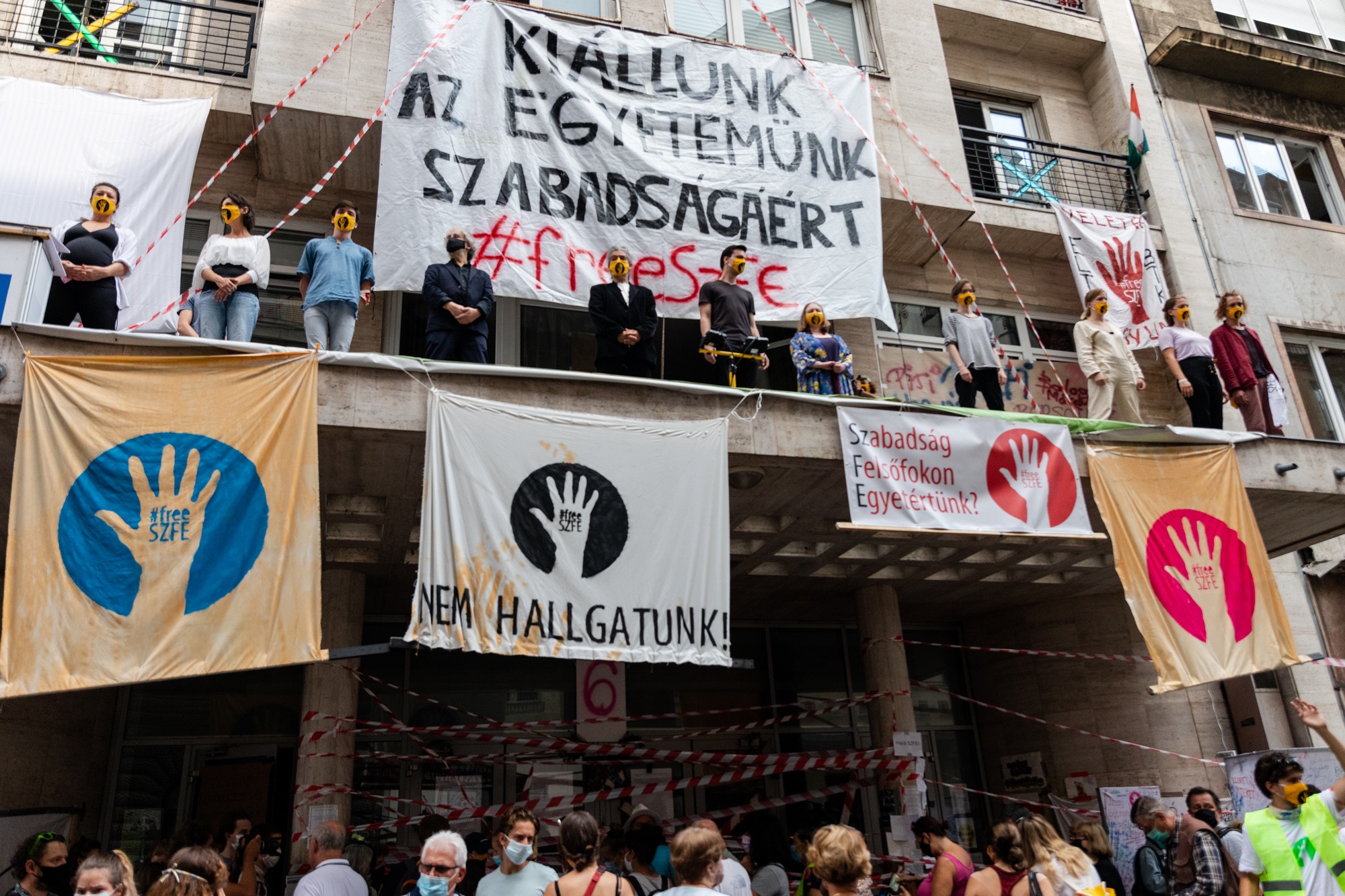 Demonstrations, blockades, and a stalemate are still continuing at Budapest’s University of Theater and Film Arts (SZFE). Students demand the replacement of the supervisory board, the restoration of SZFE’s autonomy, and the senate’s power. In addition, the university’s staff has now threatened to go on strike.

In a letter sent to Innovation and Technology Minister László Palkovics on Thursday, the students ask the minister to call for the resignation of the supervisory board of the Theater and Film Foundation, which took over the university on Sept. 1st under a government decree. They also demand guaranteed educational and organizational autonomy as well as the restoration of the powers of the institution’s senate.

The students said at a press conference that the university’s community rejected the supervisory board appointed by the ministry and regarded its activities as “illegitimate.”

They say the institution’s recently re-written statutes and organizational and operational regulations “forced onto” them by the foundation went against the interests of the university’s staff too. Therefore, the staff will initiate an indefinite strike from Sept. 21st unless the former senate’s powers and the university’s autonomy are restored.

1. Freedom of creation, education and university to be guaranteed!

2. Restoration of rights and powers the senate had before the model change.

4. The rector, and department and institute heads to be elected by the university community in a democratic way, through the senate’s representation!

5. They guarantee that the financial resources of the university will not be reduced!

On the day of the announcement, 85 workers joined the strike.

Meanwhile, the foundation’s supervisory board has again called on SZFE’s outgoing leaders to carry out their duties and get classes under way.

The board said that by boycotting a meeting between the heads of the Hungarian Rectors’ Conference and the National Union of Students in Hungary (HÖOK), SZFE’s outgoing leadership “has again rendered dialogue between the two sides impossible.” (While László Upor indeed failed to show up, Attila Vidnyánszky also chose not to- only new supervisory board member Zoltán Rátóti and a lawyer turned up on the part of the new board of trustees).

In a fresh interview with Népszava, Attila Vidnyánszky argued that while in connection with events from the last two months, SZFE students are indeed right in some aspects, there is a decades-long, latent conflict behind the events and they “want to change an infinitely closed system.” He explained that SZFE practically functioned as the school of Katona József Theater.

“It is unrealistic, even undemocratic, and unethical that a single – no doubt that an otherwise high-quality and important – intellectual workshop to be so monopolistic in a training institution that operates from the taxpayers’ money,”

he told the left-wing daily. He rebuffed that he would have occupied anything, on the other hand, labeling the students’ behavior as “aggressive.” He criticized the University for not having dedicated exams for Trianon or not having organized festivals with the Hungarian ensembles beyond the borders.

PMO Chief: The government is not involved

Gergely Gulyás once again claimed that the purpose of the model change was to prevent the state from interfering in higher education issues. “SZFE has never been so free,” he added at his regular press briefing.

Therefore, he claimed, the government cannot do anything to resolve the stalemate, and the protesters should negotiate with the [new] board of trustees. He also argued that in the recent period there had been model changes in eight Hungarian universities, seven of them had gone smoothly.

In a communique, signed by 111 of them, students of the Rippl-Rónai Faculty of Art in Kaposvár also expressed their solidarity with SZFE’s “students, permanent or outgoing instructors.” The significance of their standup hails from the fact that the University of Kaposvár’s Theater Institute (Hungary’s other institution beside SZFE to provide actor training) was the one, Attila Vidnyánszky had had a similar role in, as from 2011, he served there as titular professor then also deputy rector, between 2013 and 2020.

In addition, the topic has been brought up at the Television Journalists Award, held on Thursday, and at least two winners mentioned SZFE when receiving their prize, while some others wore “Free SZFE” t-shirts.

Rudolf: The process should be restarted

Meanwhile, Vígszínház (Comedy Theater) director and renowned actor Péter Rudolf told 24.hu, that virtually there is an intellectual civil war going on, in which “it is impossible to exist, to work, to think, to do our jobs.”

He said he sees no chance anymore for consensus or further progress and argued that the whole proecess should be restarted with the clarification of the Senate’s rights and responsibilities.

“The freedom of an art university is a national affair. I still think nothing can happen without consultation with the university. We need a fresh start. Re-planning.”