Students of the University of Theatre and Film Arts (SZFE) were forced to give up their barricade of the institution’s main campus yesterday due to Hungary’s new coronavirus restrictions. As what can now only be described as the SZFE movement is put on the backburner, we examine how it unfolded over the past months.

Due to the current severity of the pandemic, the government has recently introduced new restrictions. Universities had to move all their classes online by today, and their dormitories had to be vacated. As such, SZFE students were obliged to leave the university’s buildings on Tuesday.

Although students vowed to continue to protest outside university facilities, their barricade of the institution’s main campus effectively ended. They have been protesting for months against what SZFE’s pupils and faculty alike feel is an attempt by the government to limit the university’s freedom and independence.

How did it all begin? In the wake of a sexual harassment scandal involving theatre director Péter Gothár, and using the incident as a basis, the government introduced a new law in June which was to make the university publicly controlled from September 1st. A foundation overseen by a board of trustees was to be set up with the purpose of managing the institution.

The country’s leadership insisted that this new system would decrease dependence on the government, but teachers and students protested the decision. They saw it as a way to limit the university’s freedom by placing members and affiliates of the governing party on the foundation’s board, as happened with several other universities already. Liberal thought has always been dominant in the theatrical arts in Hungary, and many speculated that the government wanted to at least repress, if not oppress, such views in the field.

The appointment of Attila Vidnyánszky, the pro-government director of the National Theatre (who had previously made numerous derisive comments about the university, its staff, and its students) to the head of the newly formed SZFE board of trustees confirmed their worst fears. This came after demonstrations, public statements, and efforts by SZFE to reach a compromise with the government. The leadership of the university resigned a day before the changes were to take effect in protest of the restructuring, citing the institution’s loss of autonomy as the primary reason.

Following the resignations, on September 1st, the day the new law took hold, SZFE students organized a demonstration and barricaded themselves inside the university’s main campus and dormitory in Vas street in central Budapest. They refused to acknowledge the legitimacy of the university’s new leadership.

In response to the dramatic story unfolding in Hungary, many world-renowned figures of theatre and film arts expressed their support and sympathies for SZFE’s cause. In a letter published by the Financial Times, they urged Prime Minister Orbán to stop the

Signatories of the letter include the likes of Dame Helen Mirren, Cate Blanchett, and Eddie Redmayne. Many, both within the field and without, came out backing SZFE on social media, most notably Sir Ian McAllen.

In late September, Attila Vidnyánszky decided to replace the university’s chancellor Lajos Vonderviszt with the former defense minister’s chief of staff, Colonel Gábor Szarka. Szarka, although surely at home in the theatre of war and the world of politics, has little experience with the gentler arts, and his appointment was squarely rejected by students, who did not let him enter the blockaded building.

On Friday, October 16th, Szarka had the autumn break abruptly moved up, and told students that they would have to leave the dormitory by 6 pm on the day. Students refused to do so, and organized a demonstration, calling on supporters to help them with any potential altercations that might ensue. The day’s events were mostly peaceful; speeches, singing, and open palms raised to the sky in support of the university’s independence, a symbol of what could now surely be described as the SZFE movement.

Rebels with a cause

The university’s situation had changed little by October 23rd, when SZFE students organized a march for the autonomy of Hungarian higher education on the anniversary of the 1956 Hungarian Revolution.

More than 10,000 people from all walks of life took part in the demonstration. The procession set off from in front of Budapest University of Technology, and made its way to Uránia Film Theatre, near SZFE’s main campus. Once the march arrived there, SZFE’s students held speeches despite the demonstration officially being silent. They were joined by others aggrieved by the government’s policies. 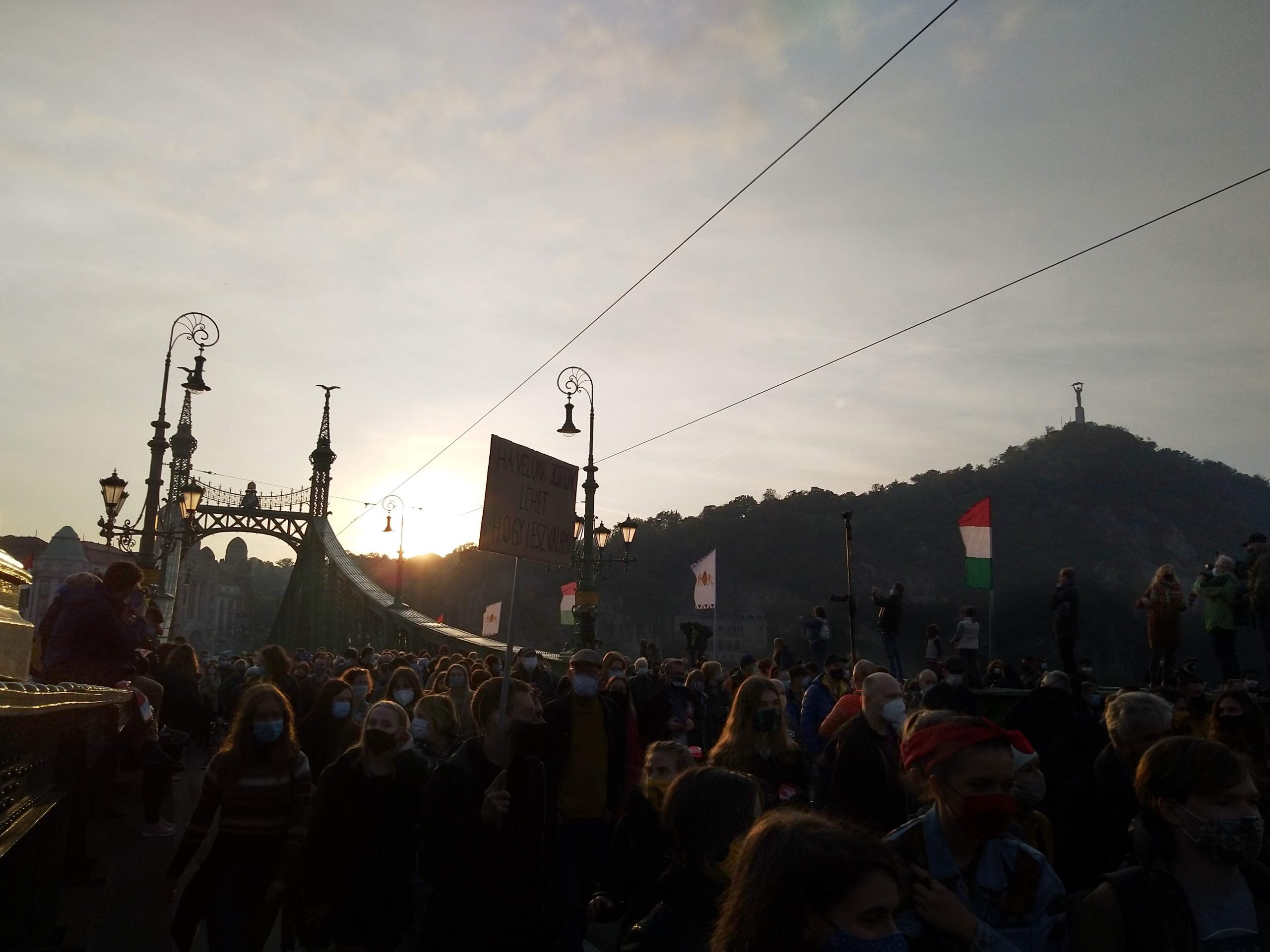 Speaking on behalf of SZFE students, Noémi Vilmos called on the government to actually solve the country’s problems rather than “cover them up, lie, or blackmail.” She noted: “It is, in fact, possible to create a revolution.” Other speakers included a member of the teachers’ union, PDSZ, the deputy leader of trade union federation MSZSZ,  a doctor,  and a nurse.

End of the line

Most recently, SZFE’s board of trustees ordered the university to shut down from Monday, November 9th until February 1st. They cited unsuitable conditions for continuing classes, and a wish to enforce and protect students’ rights and ensure academic autonomy as a basis for the decision in a letter addressed to the institution’s students and staff.

The letter, among others signed by Chancellor Gábor Szarka, also said that because the completion of credits for the courses students had registered for at the start of this semester cannot be verified, the university is not in the position to recognize these credits.

The Students’ Union protested the decision, and filed suit on Monday. The proceedings have suspensive effect, therefore the ruling cannot be carried out until the court makes a decision. They also turned to the office of education to help have their credits recognized.

Regardless of the ruling, however, for now, students had to leave campus. They will keep up their protest outside the building, but with the country in increasingly deep waters over the coronavirus, the burning flames of their resistance have been reduced to faintly glowing embers, if not snuffed out entirely.