The Hungarian spa town of Hévíz, home to Europe’s largest thermal lake, has been voted twelfth best place to visit in this year’s European Destinations of Excellence (EDEN) ranking, the local council said on Friday.

Hévíz made the list, ahead of places such as Prague and Madrid, based on a count of more than 600,000 votes submitted between January 15 and February 5.

“Relaxation and well-being are your key words for a great holiday? Hévíz is the answer. Did you know that its name “Hévíz” means “hot water” in Hungarian and that the city has the world’s largest natural thermal lake? Imagine a whole city dedicated to relaxation surrounded by lush forests,” European Destinations of Excellence writes on their homepage.

It’s probably the only spa destination where you can swim among white, pink and purple lilies, enjoy relaxing thermal mud massages on a pavilion floating on the lake; try canoeing in the steamy warm water of the Hévíz stream or have a winter swim in the 24°C thermal lake whilst big snowflakes fall around you”

Hévíz is good for heart and mind. This destination is ideal for lovers, families and lovers of outdoor sports as well as gourmets.”

In addition to Hungarians, Hévíz enjoyed the support of many German, British, Norwegian, Austrian, Russian and Asian travellers, showing the town has made a place for itself among global tourism destinations, the council said.

EDEN, an initiative of the European Commission launched in 2006, aims to raise the profile of “emerging, non-traditional European destinations”, while drawing attention to their “values, diversity and common features”. 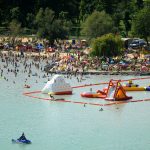 Coronavirus: Most Open-air Swimming Venues Outside Budapest to Open Next Weekend 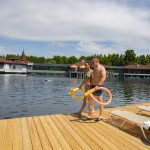