“Those who love their country support the European Union and not the policies of [Prime Minister Viktor] Orbán,” a Socialist Party MEP said on Friday.

Speaking in Debrecen as part of his ongoing “recruitment tour” of Hungary, István Ujhelyi called on the prime minister to stop “attacking” the EU, pointing out that his government will soon have to start negotiations on the next seven-year EU budget.

“How does a prime minister who has hit out at the entire European Union with a deceitful campaign want to cut a deal on the development funds Hungary will be getting over the coming years?” Ujhelyi asked. He went on to say that

Concerning the recent billboard campaign in which the government’s message is that “people have the right to know what Brussels is up to”, Ujhelyi said that “Brussels is up to going on with financing developments in Hungary unless the government and Viktor Orbán drives the country out of the EU”.

In response, Fidesz said that “those who love their country won’t populate it with migrants”. In a statement, Fidesz insisted that Hungary’s Socialist, “pro-migration” MEPs have “voted for every single plan of Brussels in the European Parliament, including mandatory quotas, migrant visas, increased funding for Soros organisations and penalties for anti-migration countries”.

“Pro-migration (politicians) will destroy Europe,” authors of the statement added.

On the featured photo: MEP István Ujhelyi. Photo by mszp.hu

Investment Volume Falls by 12% in Q3 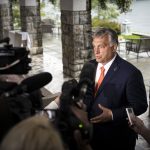