The opposition Socialist (MSZP) and Párbeszéd parties have announced a five-point programme to help young people.

Politicians on the two parties’ joint EP list told a press conference on Sunday that they would use European Union funding to develop a home rental scheme and offer student scholarships on means-tested basis.

They promised to implement a scheme to convince young people who emigrated from Hungary to return home and pledged to spend EU resources on developing education.

They also called for drafting a comprehensive action plan to assist children and young people until the time they start to work.

MEP István Ujhelyi of the Socialists said it was vital for young people that Hungary should remain an EU member states. While the Hungarian government in office only supports the richest and the bravest, the Socialists promise help to those who are afraid of getting into a debt trap, he said.

Richárd Barabás of Párbeszéd stressed the need for an educational reform which addresses global challenges and makes Hungarian youth competitive with their peers abroad. 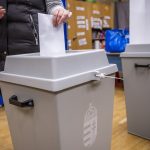