The city of Szombathely, in western Hungary, is among the first localities to back the European Commission’s plan to create a European Health Union, Socialist Party MEP István Ujhelyi said in a statement on Tuesday.

Ujhelyi on Tuesday participated in an online conference organised by Budapest’s Institute for Social Democracy and the Brussels-based Foundation for European Progressive Studies (FEPS) on opportunities to expand the European Health Union plan in Hungary.

Ujhelyi said the European Union’s next multiannual budget allocates more than 5 billion euros towards health-care programmes, most of which he said should be spent directly on local council schemes. The European Health Union should also cover the development of the health industry, he said, adding that Szombathely was poised to be a leader in this field in the coming period.

The creation of the European health union would serve not only the interests of the entire community of the European Union but also those of Hungary, opposition Socialists MEP István Ujhelyi said on Thursday. Commenting on remarks by Ursula von der Leyen, the president of the European Commission, Ujhelyi told an online press conference that […]Continue reading

Mihály Kökény, Hungary’s former health minister, who heads the country’s research on the European Health Union plan, praised Szombathely’s health-care model, saying it would be “exemplary” when it comes to implementing the EU scheme. 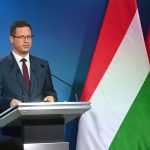