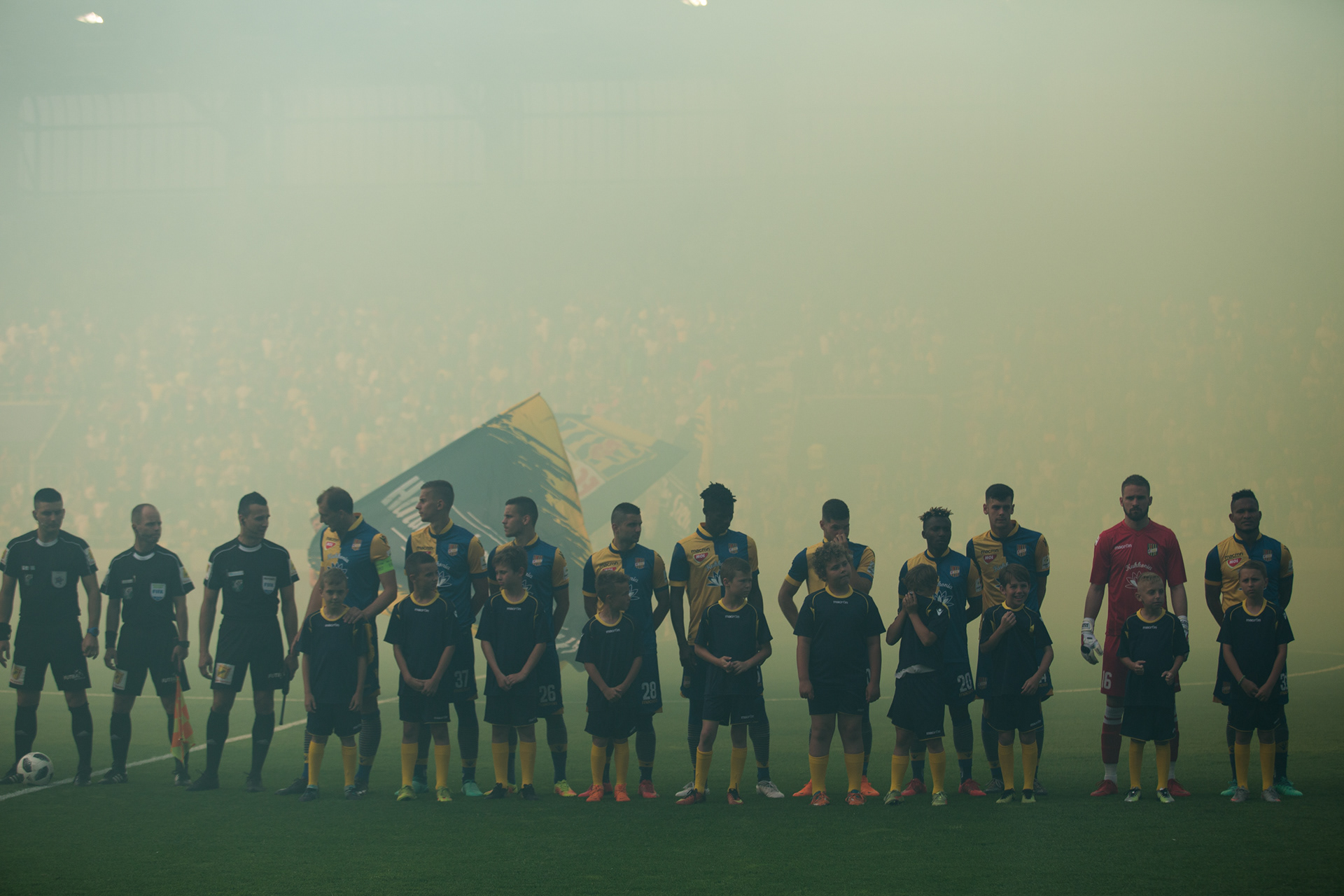 In the wake of the new Slovakian law that takes target at the local Hungarian minority, domestic parties share anger and frustration. Despite its often fiery communication, the governing alliance remained calm in its response.

Although the amendment bans all national hymns, it is clear that it is aimed at Hungarians. After all, Hungarians are Slovakia’s biggest minority and far-right SNS’ former Slovak national footballer MP, Dušan Tittel, admitted in the Parliamentary debate that the singing done by DAC’s Hungarian fans ahead of kick-off was the main motivator.

Interestingly, one of the other presenters, Tibor Jancula, played football both for DAC and Ferencváros.

FC DAC 1904 based in Dunaszerdahely (Dunajská Streda) has recently become the Hungarian minority's number one club and is famous for its heated atmosphere and large fanbase consisting primarily of Hungarians. The club begins each game by singing the Hungarian hymn and other Hungarian songs. A number of government-linked firms sponsor the team, and DAC's owner Oszkár Világi, a local Hungarian businessman, is a known ally of Viktor Orbán. Several government officials regularly visit DAC's games as well.
This is not the first time the club has found itself in the buffer zone of politics and tension. In 2008, in a match between DAC and Slovakia's most popular club, Slovan, the Slovakian police stormed the sector seating fans arrived from Hungary and proceeded to assault them. A law was passed in 2014 prohibiting the use of flags and other foreign public symbols in sporting events, and many believed it to be politically motivated.

Fidesz is careful this time

At his regular press briefing on Thursday, PMO chief Gergely Gulyás called the law “unacceptable” and promised the Foreign Ministry would take legal action. Péter Szijjártó, however, responded in a much cooler tone. During his official trip to the US, the Foreign Minister met Slovak counterpart Miroslav Lajčák. After the talks, he declared that “Hungarian-Slovak relations should be based on mutual respect” and promised that “the ethnic Hungarian community would be an asset in the process.”

Szijjártó also claimed to have discussed the issue with several leaders of local Hungarian, or partly Hungarian, parties: “we shall stay informed, watch upcoming events carefully and examine the legal ramifications; to our knowledge, a satisfying solution may be close by.” However, he has not cited any specific steps or actions to be taken in the matter. 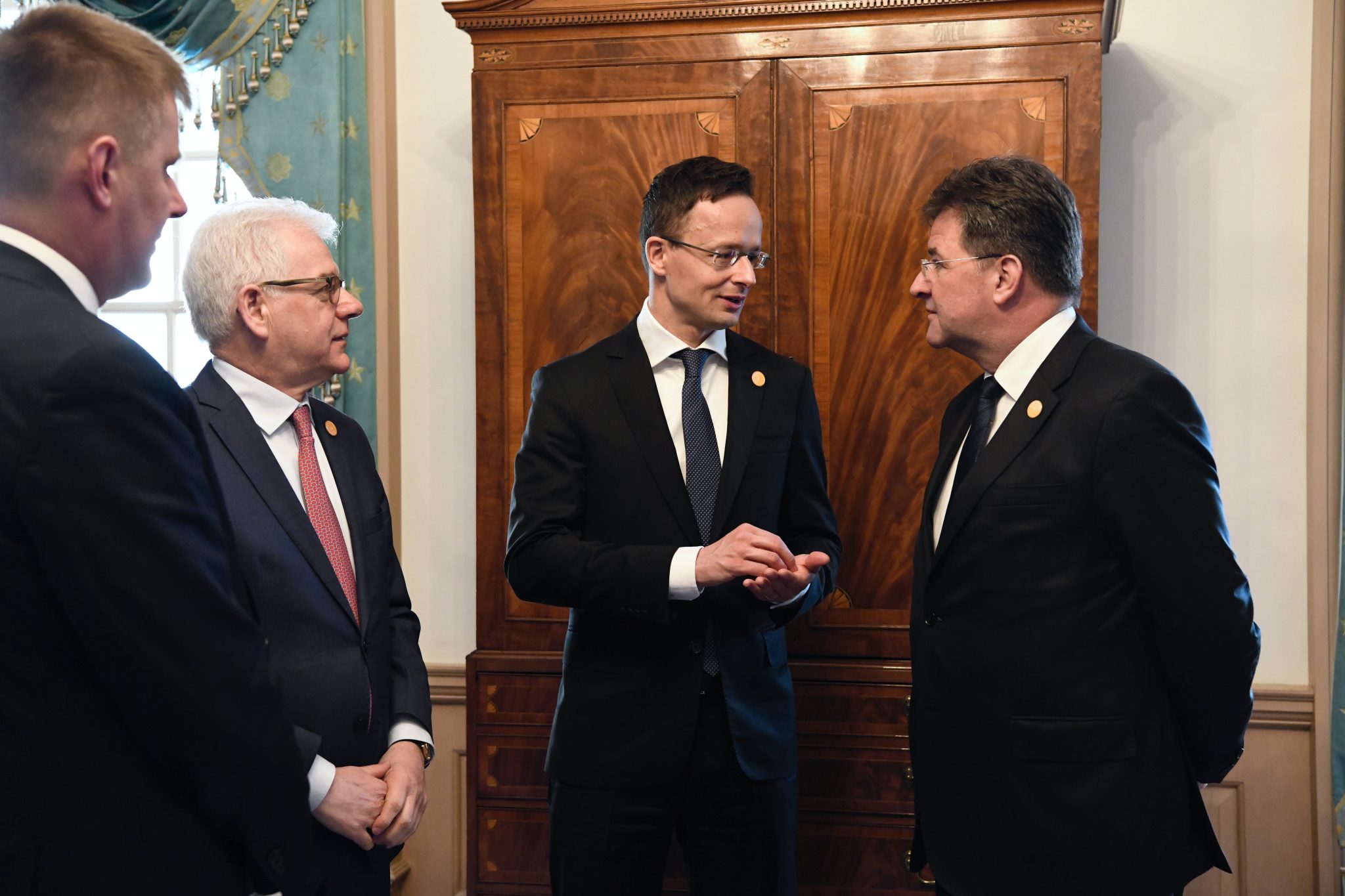 Szijjártó speaking with Lajčák in Washington. Image by MTI/KKM/Mitko Sztojcsev

Jobbik, LMP and Momentum demonstrate together

Jobbik, Hungary’s strongest opposition party, has called on the government to freeze bilateral relations with Slovakia until the country guarantees withdrawal of the law, arguing that it is not only “revolting and unacceptable,” but also “a slap in the face” for the Visegrad cooperation.

LMP and Momentum also joined in the demo held at the Slovak embassy yesterday. LMP believes this legislation is scandalous and in conflict with European values. The green opposition party promised to take legal steps as well and plans to turn to the Council of Europe.

Democratic Coalition spox Sándor Rónai claimed that “everyone should sing the anthem that he or she wants” and said that “laws like this only serve to cause tension.” He noted that it is telling that those who voted against the amendment were previously labeled ‘Soros agents’ by pro-government media. 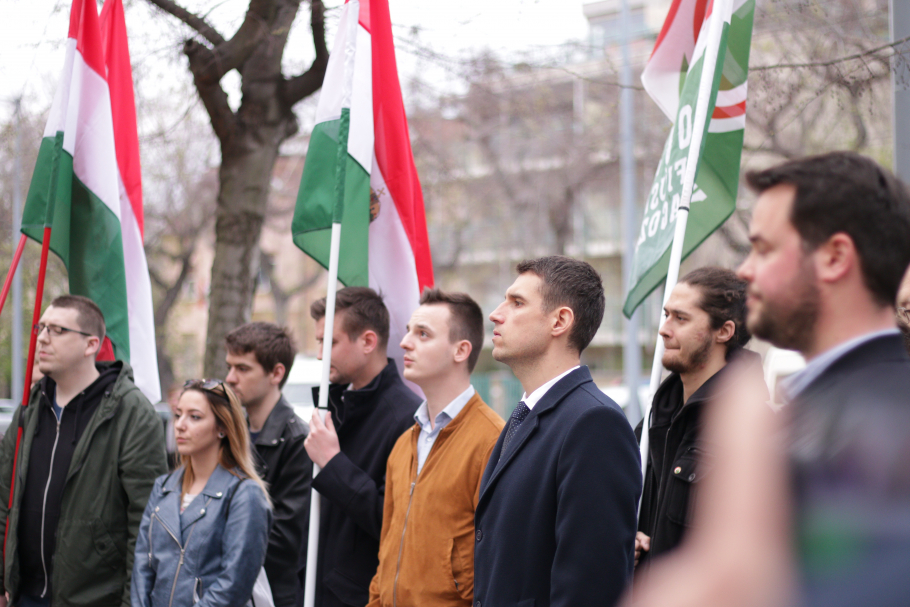 Oszkár Világi claimed that “national consciousness should not be built at the expense of others,” and said that “the singing of the Hungarian anthem cannot be prevented in this way.” In case the law does not change, they are ready to pay the fine, he insisted.

The social-liberal Progresívne Slovensko (PS) is the only party that voted against the amendment. Interestingly, the party’s politicians were previously labeled by pro-Fidesz media as ‘Soros agents.’ In a statement, PS explained that “for Hungarians living in Slovakia, singing the anthem is an extremely important (…) an integral part of their culture, which is now crowded with legislation (…) Such issues should be handled with great care and sensitivity in a way that respects each other’s cultures. This SNS-like nationalism should be a thing of the past.”

Tibor Bastrnák, the group leader of Most-Híd, a junior governing party whose membership is mixed, apologized for what he referred to as a mistake. The party’s Hungarian MPs voted for the new law, eliciting an excuse from Bastrnák that “an error occurred.” He explained that an earlier version had not contained the amendment, and when it was introduced by SNS, the party’s MPs were not present.

The leadership of the predominantly Hungarian, Hungarian Community Party (MKP), criticized Most-Híd. In a video message, MKP MEP Pál Csáky asked if the EC would be willing to pay the fines incurred for signing the EU’s hymn during campaign events ahead of the upcoming EP elections. In addition, MKP President József Menyhárt called for the resignation of the Híd-Most MPs who voted for the law.

The restrictive law needs the approval of the Slovakian President to be put into effect. However, things will change due to liberal candidate Zuzana Čaputová winning the recent election. Aware of the controversial situation, outgoing president Andrej Kiska warned the parliamentary parties to read the law amendments carefully prior to voting. It is not yet known whether he will sign the law or veto it, but the Slovakian Presidential Office promised the decision would be made next week.