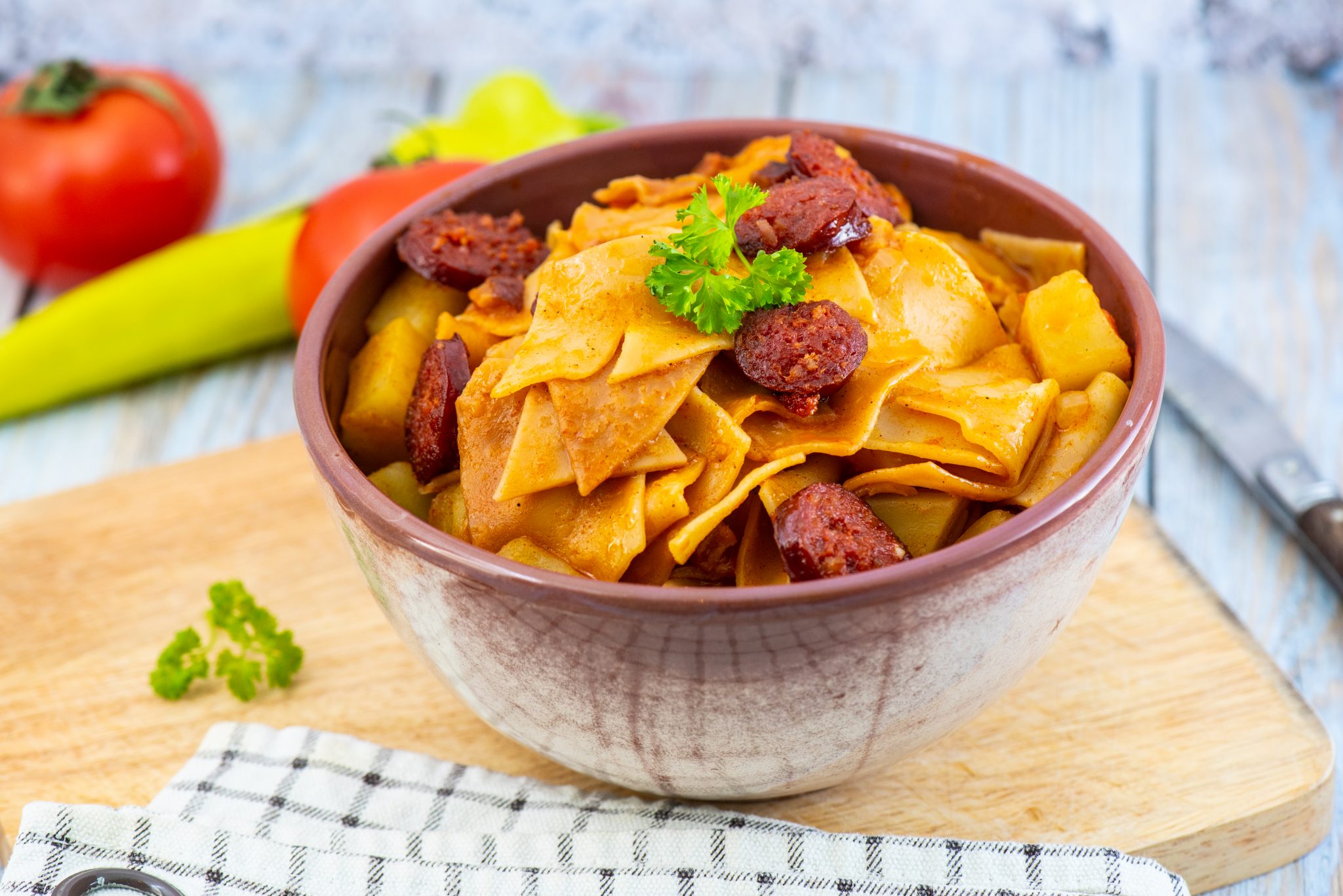 Slambuc is one of the oldest known shepherd’s dishes from Hortobágy, Hungary. Although it is even older than Gulyás (Goulash) soup, the famous Hungarian dish that foreigners first mention when it comes to Hungarian delicacies, the tasty slambuc didn’t become such an international success story as our main national dish. But this may change one day.

Perhaps this happened due to the fact that slambuc is specifically a dish for which shepherds could take all the ingredients out to the wilderness and keep it there safely for days, without anything going wrong.

There is even a theory in this regard that shepherds never actually ate goulash, as beef was so expensive and perishable that they never could have taken it with them to the fields. Obviously, they didn’t cut one of their own cattle to cook a quick lunch for themselves either. However, what they certainly ate was the much cheaper slambuc, so you could say goulash soup marketed itself with the original story of the slambuc. Later, however, it was no longer dry pasta-potato food that reached the trendy restaurants, but meat-rich foods, so the slambuc remained the food of the campfires and the poorer people.

Its popularity has not been excelled either by the fact that it is a dish specially designed to be cooked in a cauldron. Although it can be perfectly prepared in a larger pot or pan as well, it is more difficult to cook, as the dry pasta, the “lebbencs,” breaks easily and can quickly burn and stick to the pan.

Over the years, slambuc was called different – hardly translatable – names, such as öhöm, öhön, betyáros, topogó, handabakáré, szuszinka, tésztakása, and tanyai leveletlen. However, legend has it that its first name, “öhöm,” was derived when someone asked a shepherd who just finished cooking and tasted his food whether it was ready. The shepherd, with the hot bite in his mouth, could only utter: öhöm (uh-huh).

Now, let’s see how to prepare the authentic Hungarian shepherd’s food, the slambuc. In addition to the original recipe, I also baked a small sausage with it, as it is recommended by people from the Hajdúság region, where this food comes from. 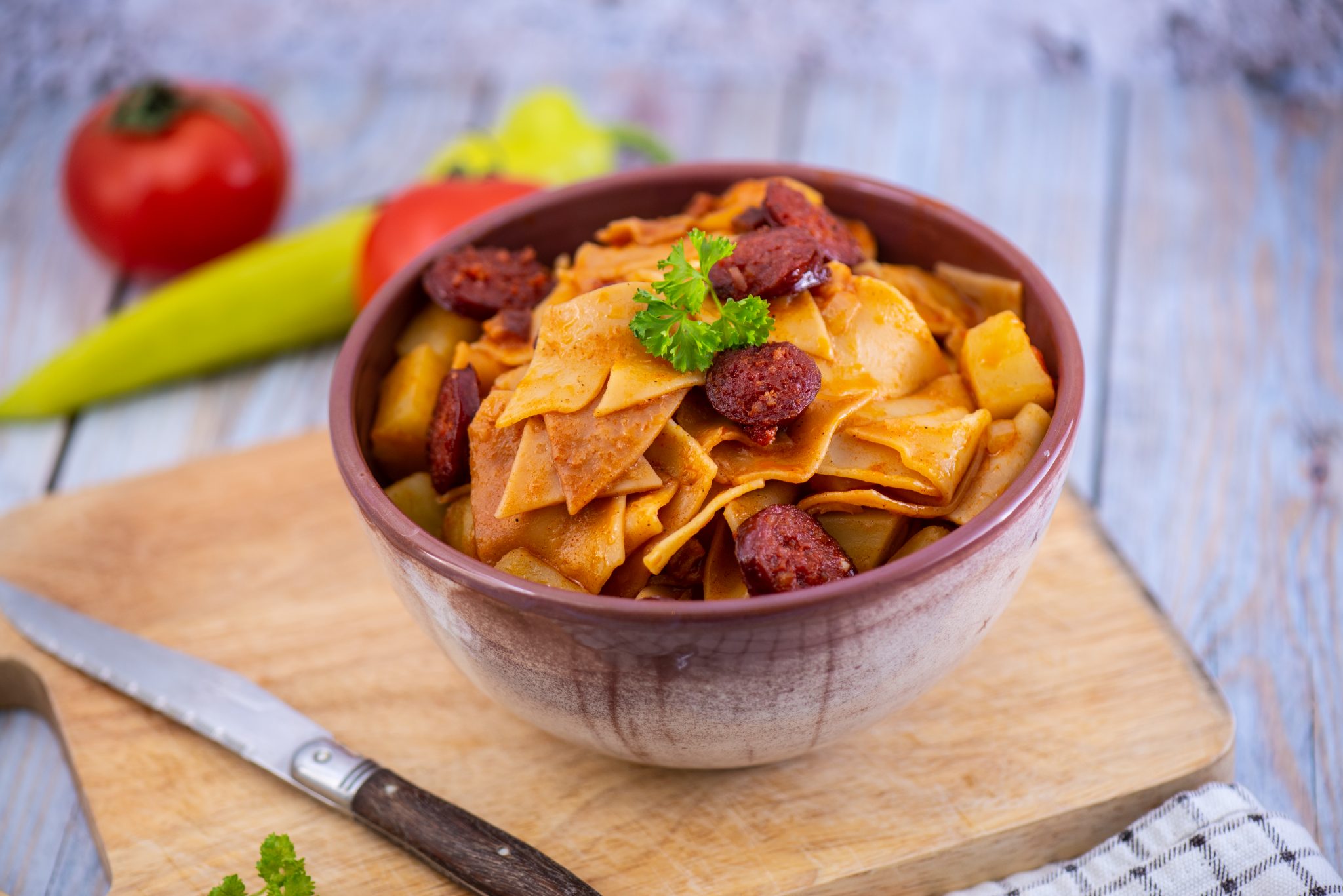 Cut the bacon into small pieces and fry it in its own fat. Once enough fat has drained from it, add the finely chopped onion and fry for another 2 minutes, while stirring. You can then add the finely chopped garlic as well. Then add the lebbencs pasta and continue to fry the slambuc over medium heat until the pasta cooks to an evenly golden-brown color. Be careful not to crush it too much, but don’t let it stick to the pan either. Once the pasta is nicely  browned, sprinkle the red pepper on a part of the bottom of the pan where there is fat, as the pepper dissolves in fat. Mix, and then pour in enough water to cover the pasta (a few inches more than the pasta). Add in the diced potatoes, tomatoes, and peppers as well. Add salt, pepper, and cook for roughly 20 minutes, while stirring often. Finally, cut the sausage into chunks and fry it in its own fat and serve it with the slambuc.