Gourmet Minutes: Seasons Bistro – A Hidden Culinary Gem in the Heart of Budapest

For years, Seasons Bistro, located at the corner of Király Street and Ferenc Liszt Square, has been a sure point of the area’s gastro center. Interestingly, however, it still seems to be a bit of an undiscovered spot, especially considering the quality and expertise that its staff brings to the table.

The appetizers section alone already gives a good taste of what Seasons has to offer: classic Hungarian bistro-style foods, served in classic Hungarian bistro portions. At the same time, every dish gets a bit of a twist, and this is not a place for your standard fried pork cutlets (cigánypecsenye) or stew and dumplings (pörkölt-nokedli). 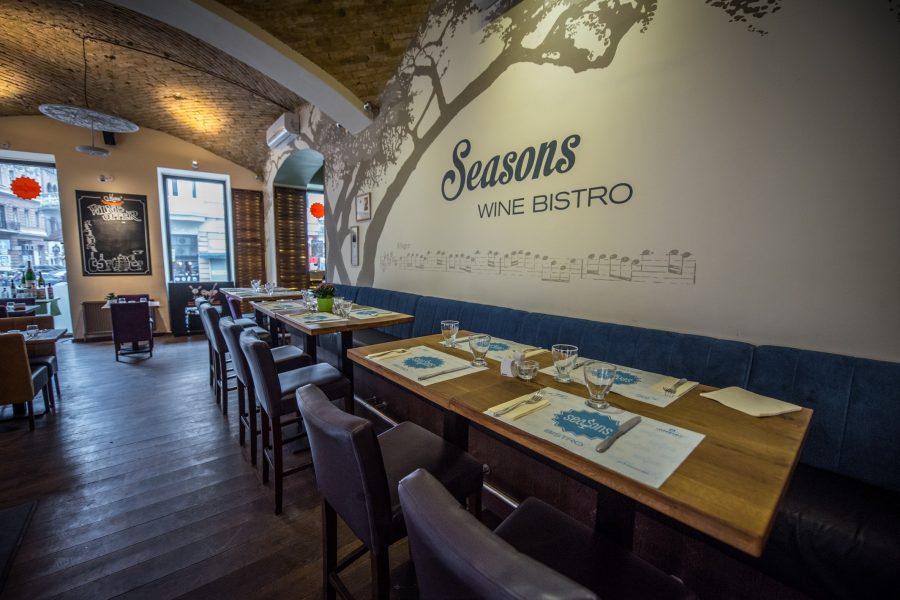 All photos by Péter Csákvári

For an appetizer, we pick an apple-celery-horseradish-radish salad served with smoked Hungarian prosciutto style ham, which immediately wakes us up from our barely-formed pre-lunch coma. The ham is simply divine, but still the biggest delight was the salad itself. At first glance, it looks like a bit of a mayonnaise-y “whatever”, but is in reality an explosively fresh, crunchy experience. From the first bite, the battle between celery and apple is so intense, and fits together so perfectly, that by the time you’ve processed it the salad’s already gone. 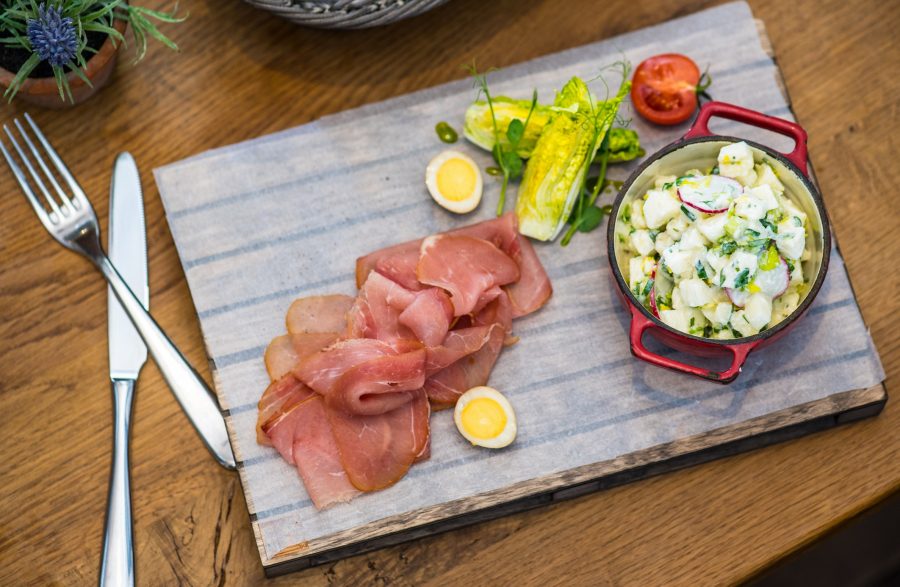 For our second course we chose a familiar old veteran, duck foie gras, which arrived atop a slice of brioche (kalács) accompanied by cashews and red onion chutney. Nor has the restaurant left the sourcing of the above-mentioned fattened liver to chance, since the Four Seaons’ supplier (God, so many Seasons…) provides them with top-shelf foie gras as well. This is a course that many people could go on eating forever. And with sides like this, you could continue eating it BEYOND forever. 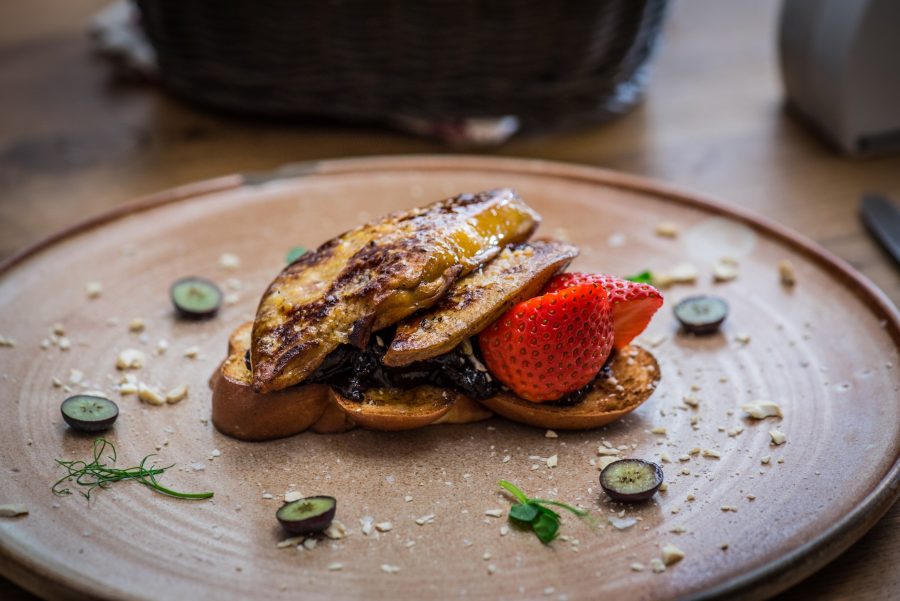 The twist that we mentioned earlier can most clearly be seen in the main courses: while we tried a “Budapest style” filet mignon and a T-Bone steak, this preparation did not include the usual, embarrassing ragout that is usually the hallmark of a steak “a la Budapest”, but rather a playful deconstruction of its elements. Nevertheless, everything is still there the way it should be: lecsó, peas, and mushrooms as well. 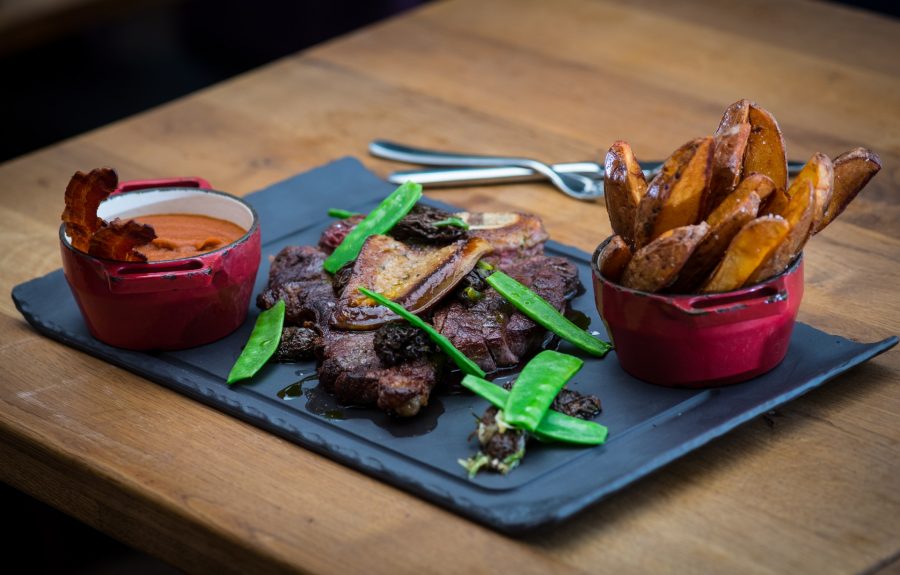 While the lecsó is in puré form, the peas are in fact peapods, and the mushrooms show up on the plate as morels. This is the type of update that doesn’t completely toss the original recipe out the window, while still remaining sufficiently exciting. The beautiful, smoky filet mignon is a beautiful success, and is prepared in the Lamborghini of ovens, the Josper (essentially a cross between an oven and a grill, which runs on 100% charcoal, which very quickly roasts meat at extremely high temperatures, which makes a steak much quicker to prepare, without overcooking. After this, the pros always rest the meat, which is currently undergoing osmosis. Once the interior has harmed through, the juices distribute themselves throughout the meat, and keep it from drying out).

The duck leg is just as clever as the steak. The must-have side of steamed red cabbage has here been transformed into a puré, served alongside polenta. The final result is not just exciting, but also makes for a much more enjoyable eating experience as well. The duck leg passes, the cabbage dunks, and go polenta! 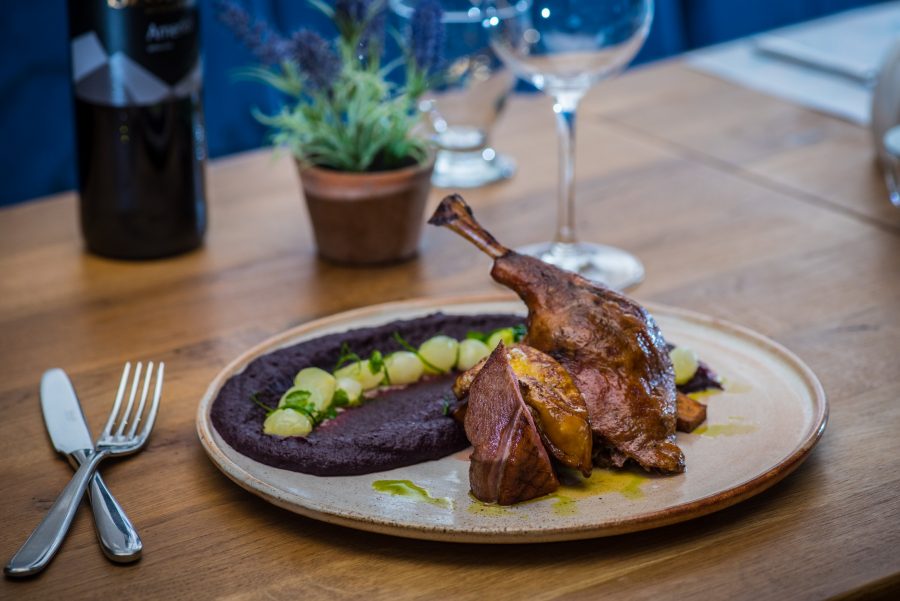 For dessert, Seasons serves a flour-free chocolate cake, which wasn’t an easy task for us, as we had been confronted by mountains of food since our arrival. The cake itself is everything that a soft, stickily chocolatey cake to round out one’s meal should be, while also being a friendly option for those with gluten sensitivity. And for those who are terrified of such a thing, presumably because they’re stuck in the last century, can happily grab a spoon of raw flour for themselves to eat alongside the cake if it makes them feel better. 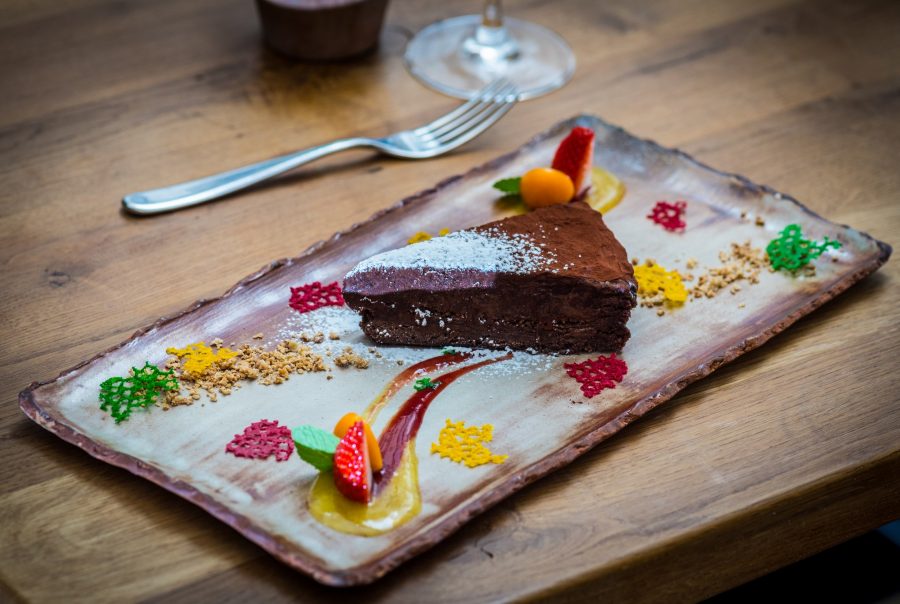 This, then is the way to put together a menu in order to simultaneously tempt both foreigners and city dwellers alike. All of this is helped by a high level of customer care, and professional, old-school service, which lately has become somewhat of a dying art in bistros. All of these together make Seasons a restaurant that – while previously hidden under the fanfare of the ‘great Budapest gastro-revolution – would be a shame to miss in downtown. 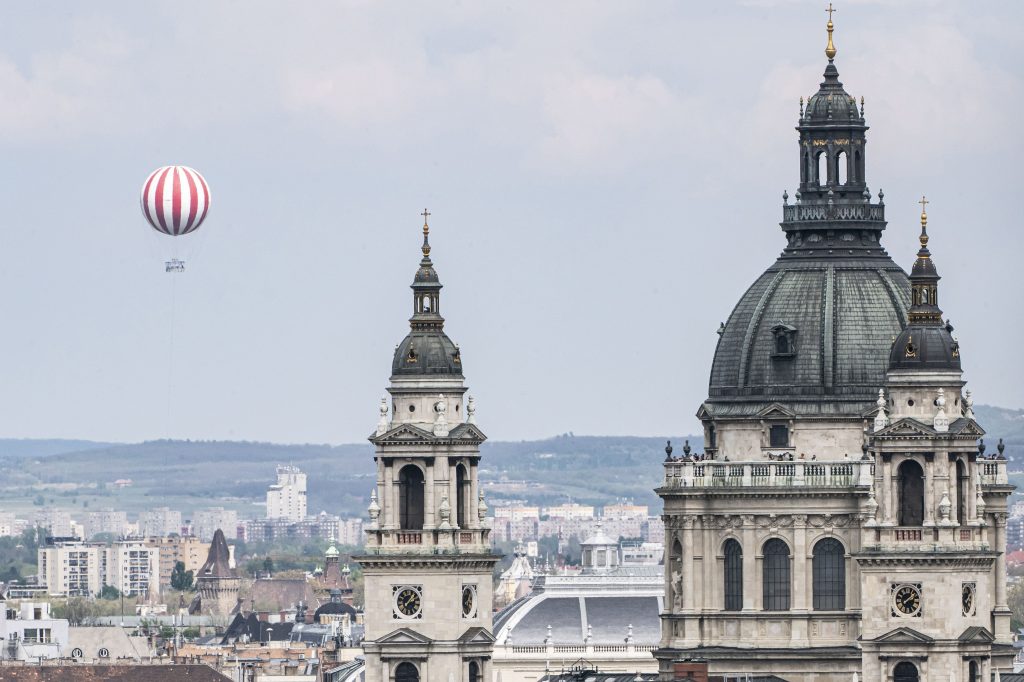 In addition to gastronomic specialities, family programs and concerts will be held as part of the St. Stephen’s Day celebrations on the Hungarian Street of Flavors between August 19-21 in front of the Várkert Bazaar on the Buda Lower Quay, where this year the main focus will be on cereals, but you can also taste […]
Barbara Bene 2022.08.11.

Prime Minister Viktor Orbán is spending his usual summer vacation in Croatia. According to the information from Index, a Hungarian news site, the PM is on the island of Brač where he was spotted in a restaurant. The staff of Konoba Gajate even posted a picture with Viktor Orbán, adding that it was an honor […]
Barbara Bene 2022.08.08.