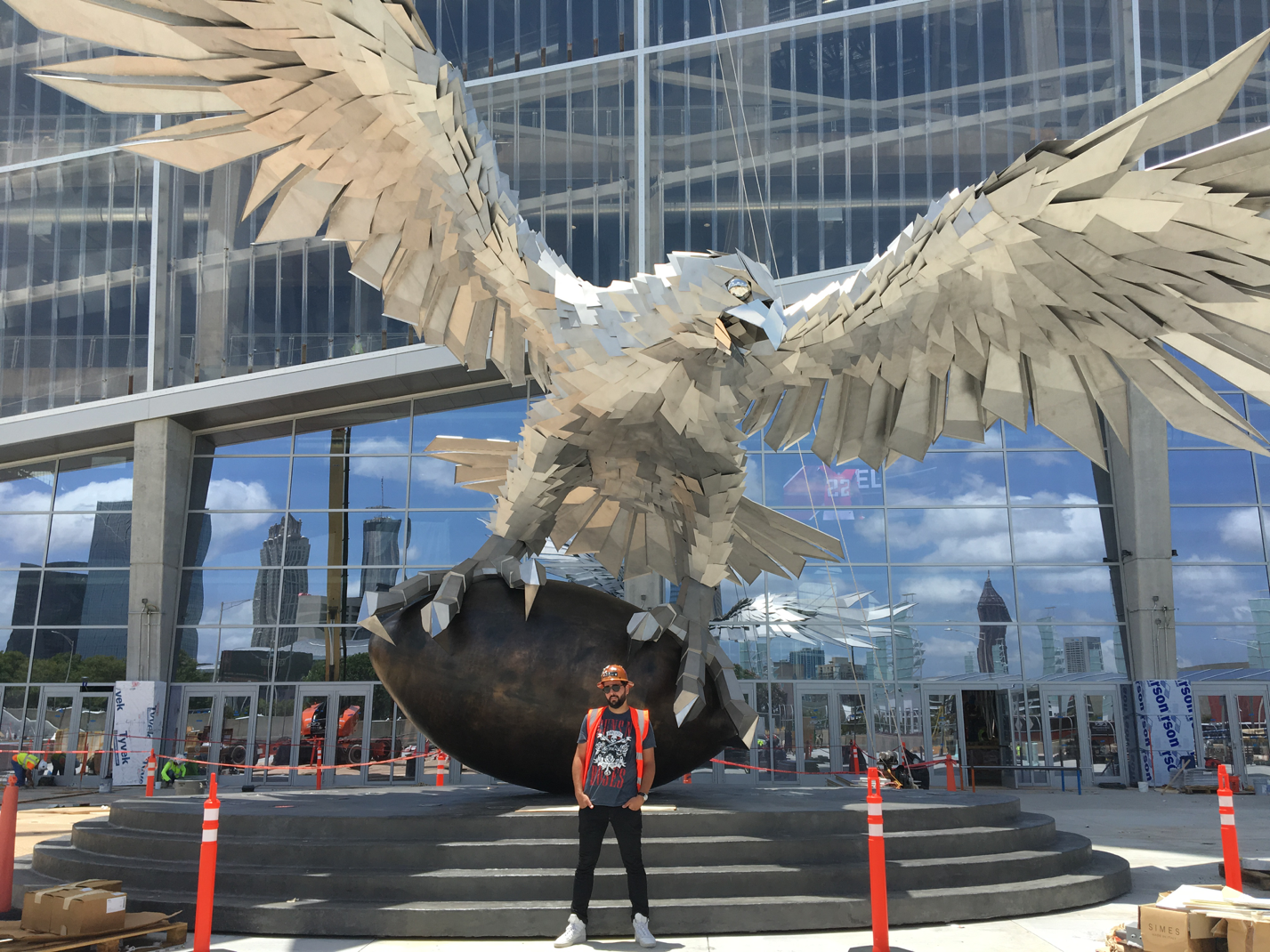 “If you have a good work ethic, self-confidence, ambition, and are not looking for obstacles but for solutions, then I think anyone can achieve anything in Hungary today that they want,” says award-winning, internationally-recognized sculptor, Gábor Miklós Szőke, in a short film presented by the Friends of Hungary Foundation, publisher of Hungary Today. The video displays how the world-famous sculptor is preparing for his next big project and also reveals the teamwork and responsibility behind the artist’s work. The short film is part of a series that introduces ten exceptional Hungarians, who through their skills and hard work, also became well-known abroad.

Gábor Miklós Szőke was born in 1984 in Budapest. He studied sculpting at the Hungarian University of Fine Arts, and through a scholarship he had the opportunity to study in Milan. He spent time at the Accademia di Belle Arti di Brera which had a great influence on him and his work. In Hungary and internationally as well, Szőke is known for his public animal sculptures. Szőke admits at the beginning of the video that

Most of my sculptures are inspired by animals – somehow I can express more through animals than human forms, as animals are capable of superhuman things”

His creations are mainly made of wood and stainless steel. He considers sculptures to be the palpable result of his work, through which he can re-trace significant events in his life.

For Szőke, existence equals creation, and sculptures are the physical manifestations of this. He breaks down anatomical forms into elementary units and then reinterprets these with the industrial re-construction of these elements. He brings complex and inextricable structures to life.

“It is about me creating another thing from a material, or a new thing, which is both a destruction and a construction. And then from the balance of these two, a sculpture is created tangibly.”

Szőke is currently working on a very large-scale project. He received a request from the Hungarian National Bank to create four groups of sculptures. One of the creations will depict a fighting bear and a bull made out of parts which resemble candlestick charts used in stock market analysis. The other artwork will symbolize nine giant golden lions jumping out of thirty meter silver clouds. 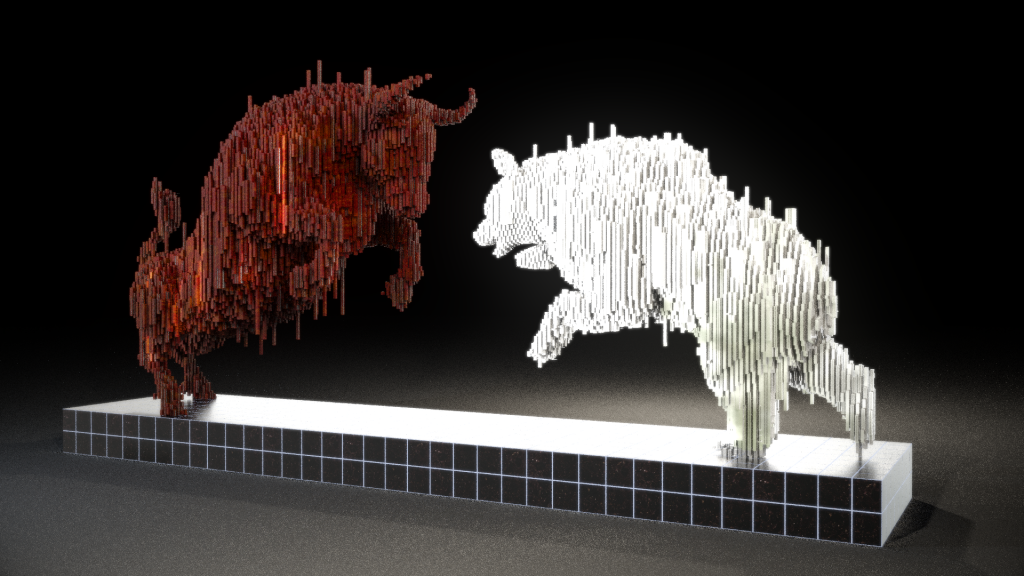 A bear and a bull fighting.

In the video, Szőke leads us to the venue of both of the creations at Krisztina körút 55, where the new offices of the National Bank will be located. The fighting bear and bull will be an outdoor sculpture in front of Telekom’s former headquarters, the other one, even larger, more “visionary” group of sculptures will enrich the hall of the new office building.

“My own sculptures should not only provide an aesthetic experience, or only reflect the built environment, but beyond that and in addition to this, I think like a totem, sculptures or any other work of art have a similar role, for thousands of years, in the history of art,” Szőke says, while standing in the hall of his new composition.

Despite his young age, Szőke has nearly 100 pieces on three continents, which have all become defining and emblematic elements of their surroundings. His work can be found in busy public squares in Washington DC, Gstaad, Milan, Rome, Munich, Vienna, Moscow, Nizhny Novgorod, Zagreb, Samorin, Nagyvárad (Oradea), Budapest, and many other cities worldwide. 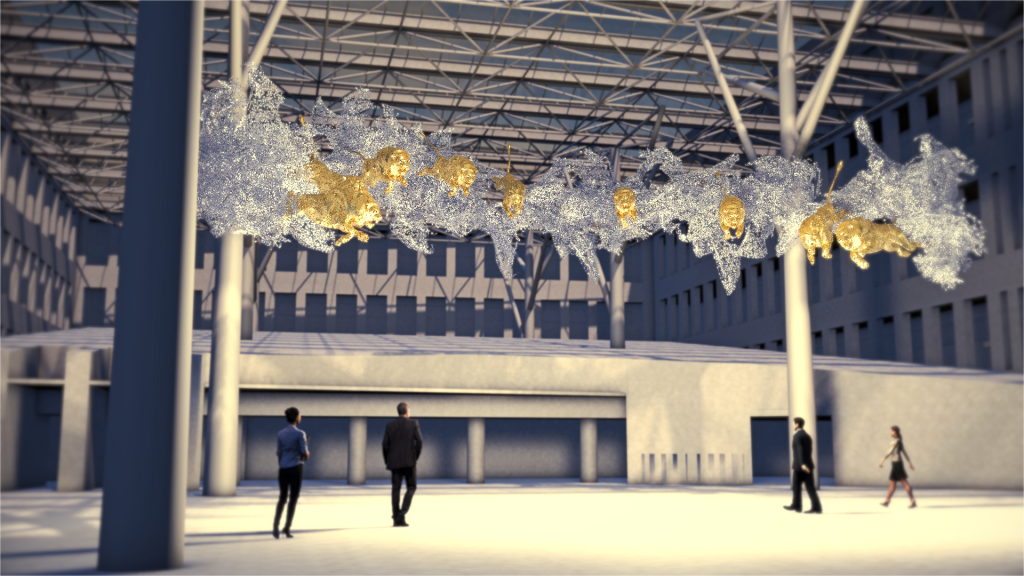 The Sky of Lions.

He leads us to Csepel, Hungary, where his studio is situated in which he has been working for six years now. Szőke reveals how the hard work behind the new composition for the National Bank is taking place in his studio.

“As you can see, a shape like this is made up of a lot of pieces, which requires terribly meticulous work,”

the artist says in the video, as we can see how the silver coin-like design of the clouds from which the lions will jump out is under construction.

The Sky of Lions.

Szőke also tells us how much responsibility lies beneath his work, as public sculptures can be approached by anyone, and is not like a museum where people have to buy a ticket. He argues that such sculptures have to address a wide range of different people, and hence it is harder to create a composition that satisfies everyone. He also adds on to this by claiming that generally, people believe that such a work is individual whereas actually it is more so teamwork.

“The fact that so many people are behind an artist, or if there are any at all, is not clear to everyone; however, you do have helpers because a grandiose job requires a grandiose team, this is the only way to move forward and think on a large scale.”

In Hungary, Szőke has created a number of different animal sculptures that became quickly well-known in the country. The giant wooden dragon statue in Kazincbarcika, Hungary, the Guardian Tiger which was created for one of the poorest villages in Hungary, and the Fradi Eagle in front of Groupama Arena Budapest are among the famous artworks the sculptor has made in the country.

He also created a huge composition for the Super Bowl in 2019, America’s most anticipated sporting event. A giant falcon statue welcomed spectators to Atlanta’s stadium. 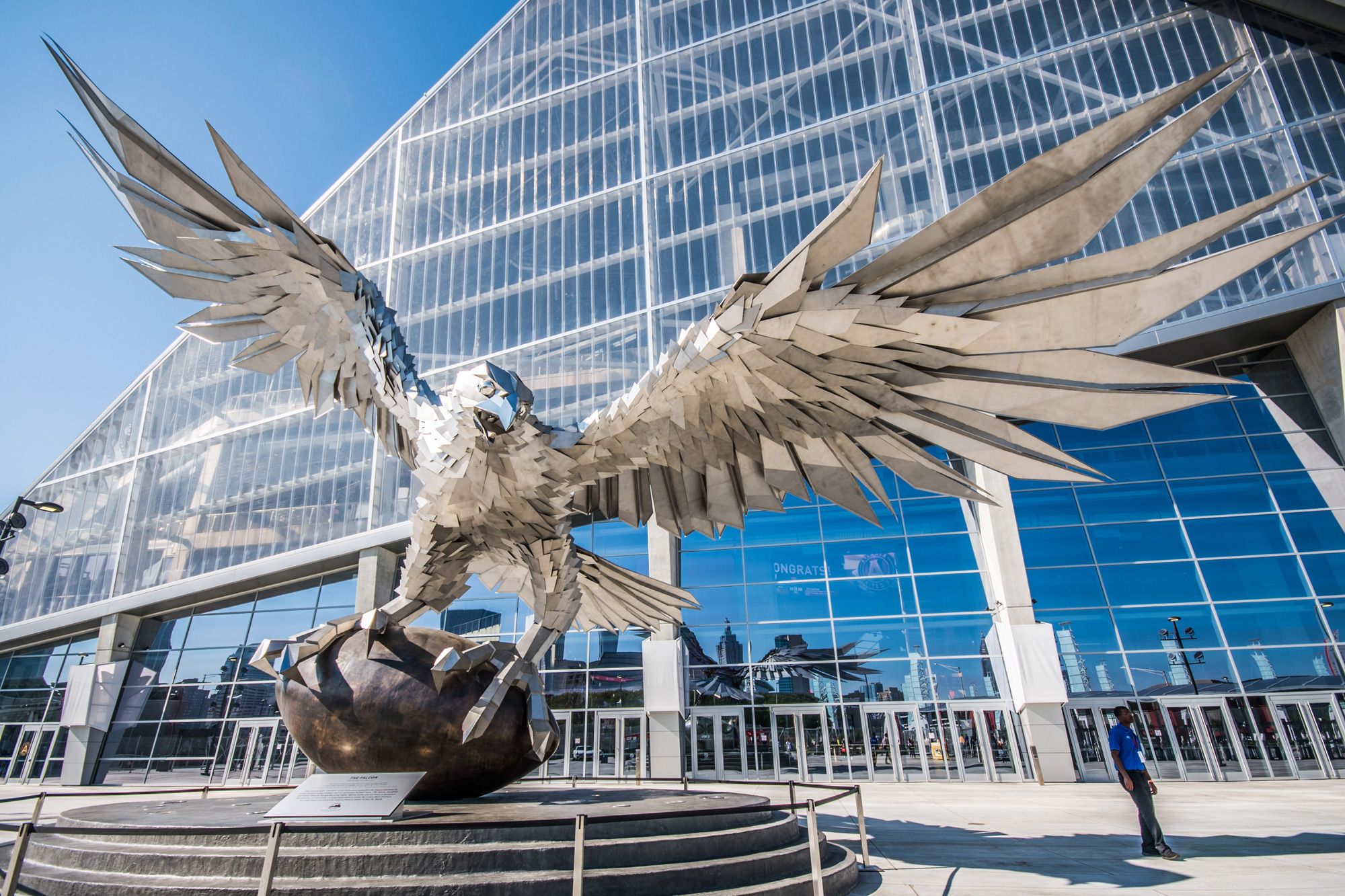 In the midst of the excitement of yesterday’s Super Bowl, America’s most anticipated sporting event, one could spot a somewhat familiar, Hungarian detail: the giant falcon statue welcoming spectators to Atlanta’s stadium was created by a Hungarian sculptor. The sculptor, Gábor Miklós Szőke, is known in Hungary for constructing the sensational eagle monument standing in […]Continue reading

Furthermore, in 2013, he also stood out at the Smithsonian Folklife Festival in Washington, D.C., with a large “Puli” wooden statue. He is also well-known in München where he appeared with a statue of a “Sad Pig” breaking out of his cage. These pieces are by no means the extent of all his work; it would be simply impossible to list the full range of his artwork.

You can watch the short film about Gábor Miklós Szőke with English subtitles here: