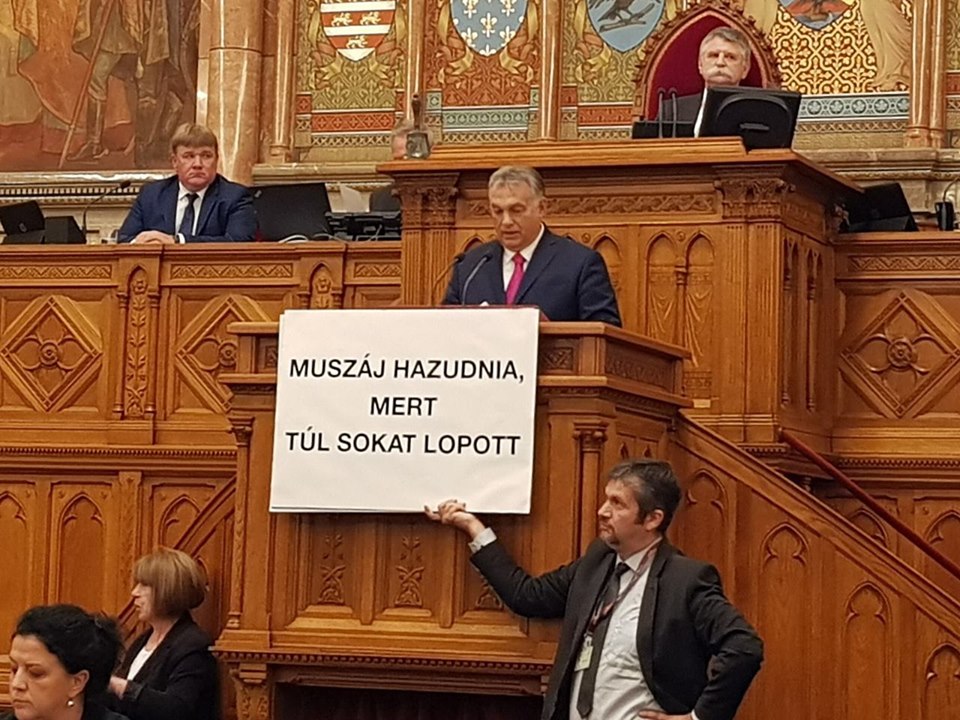 The Parliament began its autumn session on Monday afternoon. Right at the beginning of the meeting, a scandal broke out. During Viktor Orbán’s speech on the agenda, independent MP Ákos Hadházy stood in front of the podium holding an anti-government banner that the Prime Minister tried to take away from him. Later, the politician, sitting in his seat, held up another sign with an astonishingly obscene expression. The incident angered the house speaker, who impetuously scolded the politician.

At the parliament’s first autumn session after the municipal elections on Monday, Prime Minister Viktor Orbán was the first to speak, evaluating, among other things, the results of the local elections.

During the prime minister’s address, independent MP Ákos Hadházy held up two banners from under the podium with the slogans: “He has to lie because he stole so much.” and “Stop propaganda, Stop corruption.”

First, Orbán unsuccessfully tried to tear the banners out of his hands, then ruling party MPs snatched the messages from Hadházy after a scuffle. Meanwhile, some Fidesz MPs tried to cover the independent MP’s signs with the Hungarian flag.

László Kövér, the house speaker, rebuked Hadházy and called on all opposition deputies to drop their “aggressive” and “militant” attitude. He said deputies should observe house rules and “refrain from making a circus out of parliament.”

After this intermezzo Hadházy, returned to his seat, but later when Orbán began to speak during the opening address before the session,  Hadházy displayed another board from his seat which contained a particularly obscene “A lónak a faszát!” (the cock of the horse)  expression. (The extremely obscene phrase Hadházy used is a recurring rhetorical element in his speeches during demonstrations he organizes).

Ákos Hadházy later revealed he had wanted to show this board in case Viktor Orbán started talking about migration.

The inscription outraged the house speaker, who even stopped Viktor Orbán’s address to comment on the action and on the opposition MP himself.

“How far can you sink into stupidity and lack of decorum? Who do you think you are? (…) You primitive, dumb, good-for-nothing.”

Hadházy said he would not go to the “ridiculous parliament theater” in the future, calling on the opposition to work outside the house and organize themselves for the 2022 general election.

In his response, Csaba Dömötör, Parliamentary State Secretary of the Cabinet Office of the Prime Minister said on Facebook  “…neither profanity nor a pub style of speaking can obscure the lack of message and meaningful thoughts. Opposition voters likely expected more than this crude slogan.”