Dutch Green MEP Judith Sargentini, author of a report critical of the state of the rule of law in Hungary approved by the European Parliament last year, addressed a demonstration against the Hungarian government’s policies organised by the Hungarian opposition in Brussels on Tuesday.

In her speech at the protest organised by the Radical European Democrats (RED) movement, Sargentini stressed the importance of a free media and being critical of governments in a democracy.

She said it was dangerous to conflate a government or a political party with the state or its citizens, adding that this is what was happening in the case of debates on the situation in Hungary.

She also said it was important for trade unions, civil groups and opposition parties to come together.

As regards her report, Sargentini said it focused on a number of key topics about civil rights in Hungary and how the Hungarian government was undermining those rights. The MEP said all European citizens have equal rights.

Sargentini said she was expressing solidarity with Hungarians because they are “first class European citizens”.

The politician said the time for “quiet diplomacy” was over and it was time to act, lest the situation worsens.

Socialist Party MEP István Ujhelyi said being Hungarian was equally important to remaining European. “Let’s keep Hungary in Europe,” he said. “But we have to choose: Europe or Orbanistan.”

Democratic Coalition MEP Csaba Molnár said Hungary was “revolting” because [Prime Minister] Viktor Orbán had “ruined” the shared European ideal in the EU over the past few years. He said that by not expelling ruling Fidesz from the ranks of the European People’s Party, EPP group leader Manfred Weber was “protecting a deceitful, corrupt regime that is rotten to the core”.

Párbeszéd MEP Benedek Jávor’s speech was read out by his colleague Roland Papp. He said “Orbán’s Hungary” was becoming a country of public workers and overworked public sector workers.

János Kendernay of LMP said the “Orbán regime” was serving big capital over the people. He said Hungary’s workforce would eventually disappear, because “anyone who can is leaving”.

Barnabás Mester, one of the founders of the RED movement, pointed out the number of Hungarian participants at anti-government protests abroad, saying that those people had left Hungary because of the government’s policies.

Balázs Németh of the Momentum Movement said 2019 would be the “year of resistance” and that Hungarians would have to be politically active “until Hungary has a democratic government again”.

The demonstration the Hungarian opposition will stage against the government in Brussels on Tuesday afternoon is part of US billionaire George Soros’s campaign for the upcoming European Parliamentary elections, the communications director of the ruling Fidesz party said on Tuesday ahead of the demonstration.

“The cat is out of the bag”, Balázs Hidvéghi told journalists, noting that the demonstration will be joined and addressed by Dutch Green MEP Judith Sargentini, whom he called “one of Soros’s most important people”.

Sargentini has authored a report that criticises the state of the rule of law in Hungary and calls for the Article 7 procedure, which can ultimately suspend a member state’s voting rights, to be opened.

Hidvéghi said that Soros “is doing his utmost to attack Hungary” and as part of his efforts “he has even commanded” Sargentini to join the Hungarian opposition in their campaign “smearing Hungary” in Brussels.

Hungary faces these attacks because Hungarians reject immigrants and “stand in the way” of the implementation of Soros’s pro-migration plan, he said.

A demonstration in Brussels by the Radical European Democrats (RED) dubbed “Stop Orbán” is not about Hungary’s new labor code, the judicial system or the rule of law and democracy but it is the work of the “Soros network”, state secretary for international communications Zoltán Kovács said in a blog entry on Tuesday.

The demonstration shows the international Left engaged in a concerted campaign effort, desperate to find some sliver of hope for their own electoral chances and to smear a popular, democratically elected government that staunchly opposes immigration and insists on national sovereignty”

Anyone who looks at the details of the new labour law, can see that the claims of the Hungarian government’s political opponents are a farce, he added. The new rules make it possible for employees to voluntarily work more overtime hours, Kovács said.

Referring to an Organisation for Economic Co-operation and Development (OECD) chart which he inserted in the post, he said it showed that the new rules would take Hungary closer to the OECD average.

But if you’re worried about ‘slavery,’ you should probably look at some of those other labor markets”

As regards the judicial system, Kovács said Hungary’s legal system has long been a part of the Austrian and German legal tradition, where the constitutional courts are clearly independent. These new courts would do nothing to undermine that, he said, referring to the public administration courts.

He sharply criticised the “unsavory coalition of parties” that have joined forces.

“They’ve got the Hungarian Socialists and the Liberals and the Green and, in their Budapest demonstrations and plans to compile a common list for the European Parliamentary elections in May, they also include – waitforit – the far-right, anti-Semitic, anti-Roma Jobbik,” he said.

He added that Jobbik is the same party whose vice president once called for a list to be drawn up “to find out how many MPs or government officials of Jewish origin there are who pose a certain national security threat.”

“For years, Leftists, the liberal media establishment, and the pro-migration Brussels elite have tried to smear the Orbán Government as ‘anti-semitic’ and ‘xenophobic’. [Dutch Green MEP Judith] Sargentini even had the audacity to include a passage about ‘rights of persons belonging to minorities, including Roma and Jews’ in her report. But what do they do when Hungary’s left cozies up to the real xenophobes? They simply turn a blind eye,” Kovács said in the blog entry. 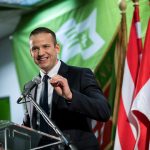 Mi Hazánk to Protest Against ‘Excessive Closures’ on March 15th