And this is the moment when my pulse, without any note of warning, suddenly increased. This very phrase belongs to the creator of the brilliant project Homage to Photographic Masters – the famous American photographer Sandro Miller, known to the world as Sandro. 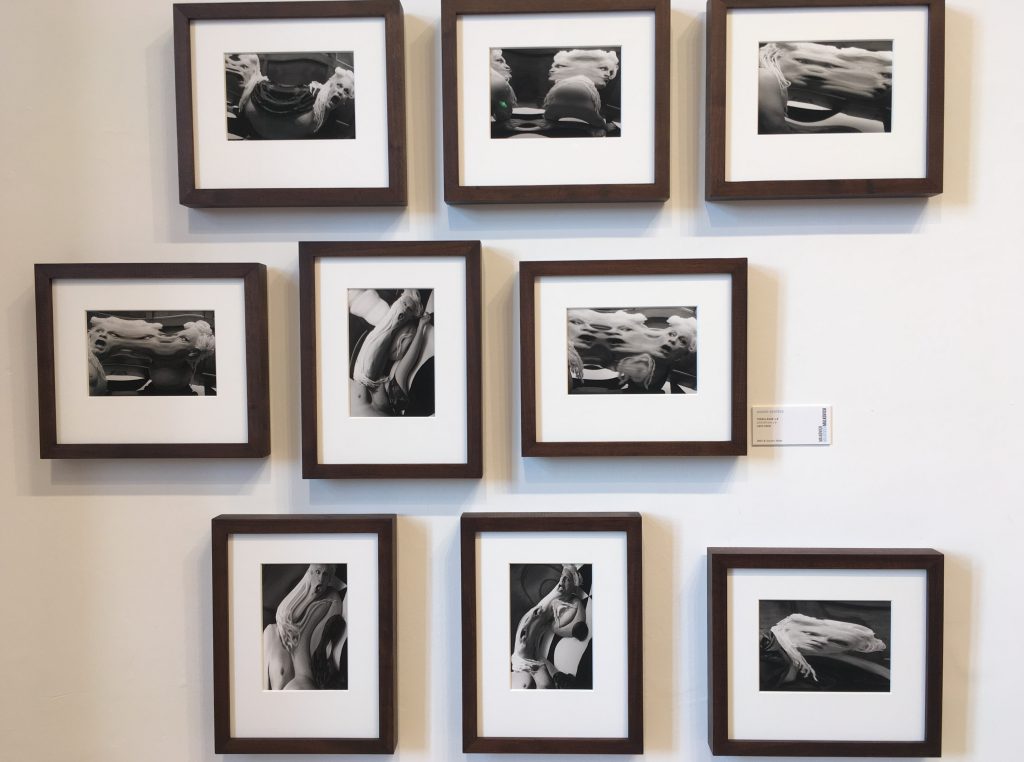 One of today’s foremost photographers, with numerous award-winning campaigns, Sandro has thanked Budapest for hosting his exhibition Malkovich, Malkovich, Malkovich: Homage to Photographic Masters in Budapest’s Kunsthalle, which  has become one of the most visited programs within the Budapest Photo Festival. For those of our readers who haven’t been to the exhibition yet, it is open till the 15th of May, so check it out! 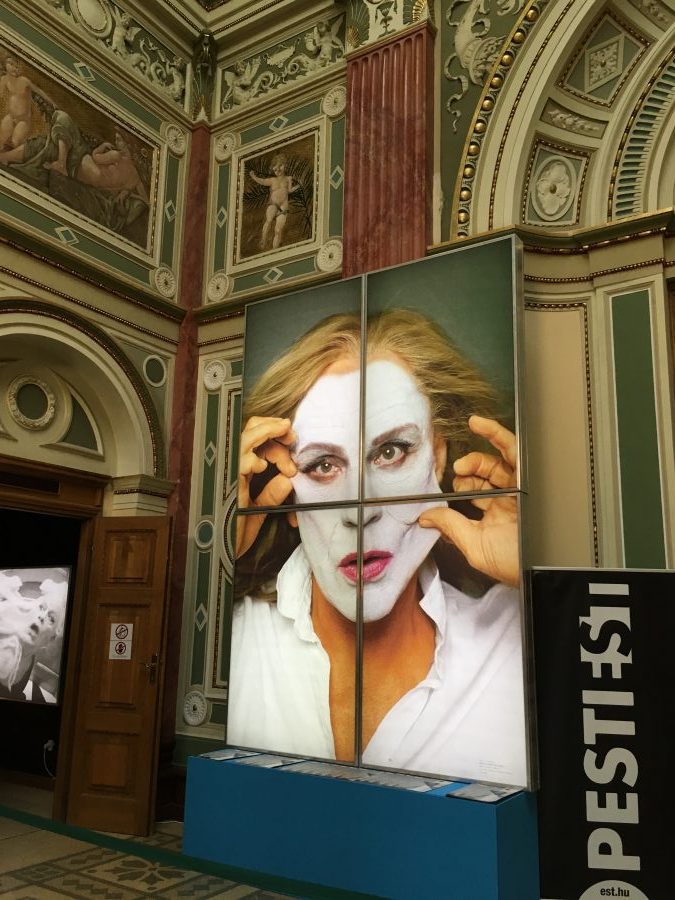 Here comes my confession about any knowledge related to the background story as well as the details of the display. It was left a great deal to be desired before my actual visit earlier this March. Being very passionate about photography myself I was a bit ashamed for this gap but believe it or not – my first contemplating the exhibition without any preparation added some magic to it.

The very first display to catch my attention was the earth-shattering photo of Albert Einstein Sticking Out His Tongue. It took me a great deal of time to finally realize that’s it is not a famous physicist I am staring at, nor was it taken in 1951, but is an image of a chameleon – like actor John Malkovich in one of his million appearances shot by Sandro in the year 2014. With a naked eye it is quite challenging to understand that this is a recreated version and not the original image itself. Don’t you agree? 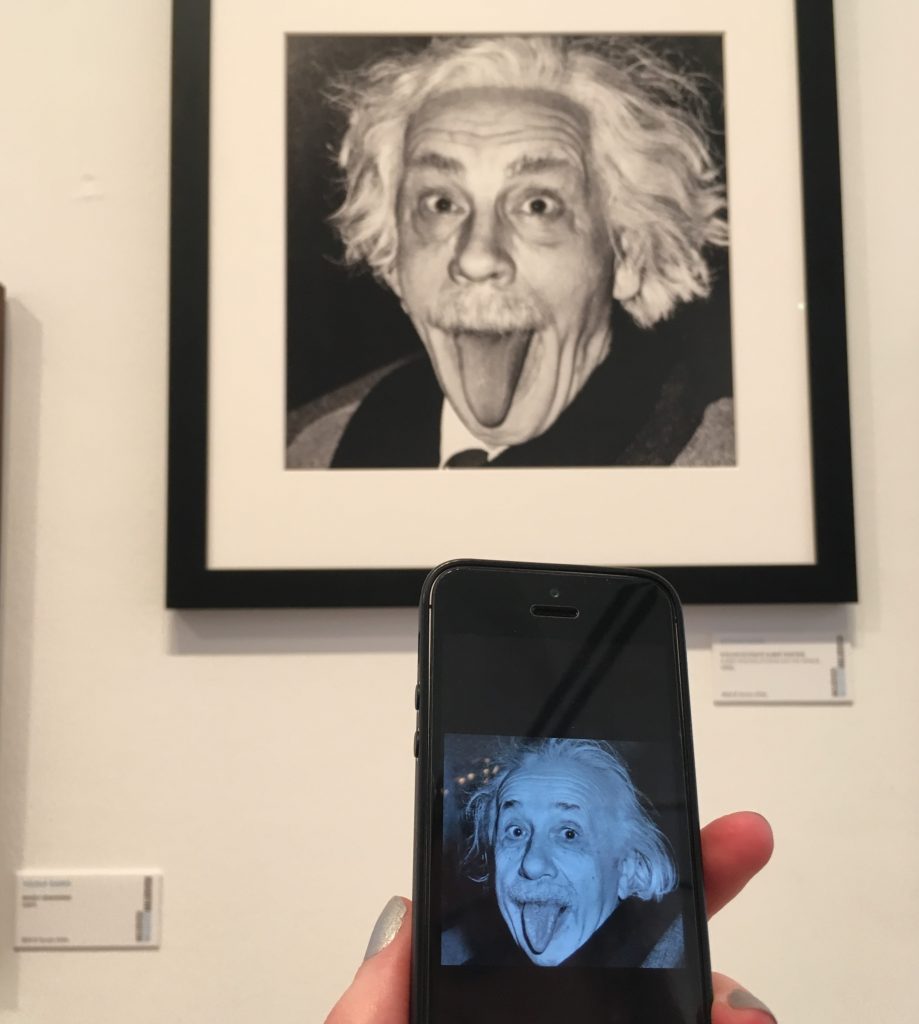 Among the magical thirty – five pieces exhibited, I was undergoing some inner struggle admiring other examples. For up to two hours in a row I kept gazing at such images as the recreated piece of Irving Penn’s photograph of Truman Capote; Dorothea Lange’s image of a John Lennon and Yoko Ono; Richard Avedon’s determined beekeeper, as well as Diane Arbus’s classic photo of a boy with a hand grenade, and of course impressive photographs of Marilyn Monroe with a cross made by Bert Stern. All without a single exception weren’t meant to be a parody of the original version, on the contrary it is a virtual thank you from the author to all those great photographers that inspired him and made him willing to devote his life to this art.  Either my words are failing me, or the student has indeed surpassed his masters.

Going through some of the author’s interviews a number of fascinating stories and facts come forth. 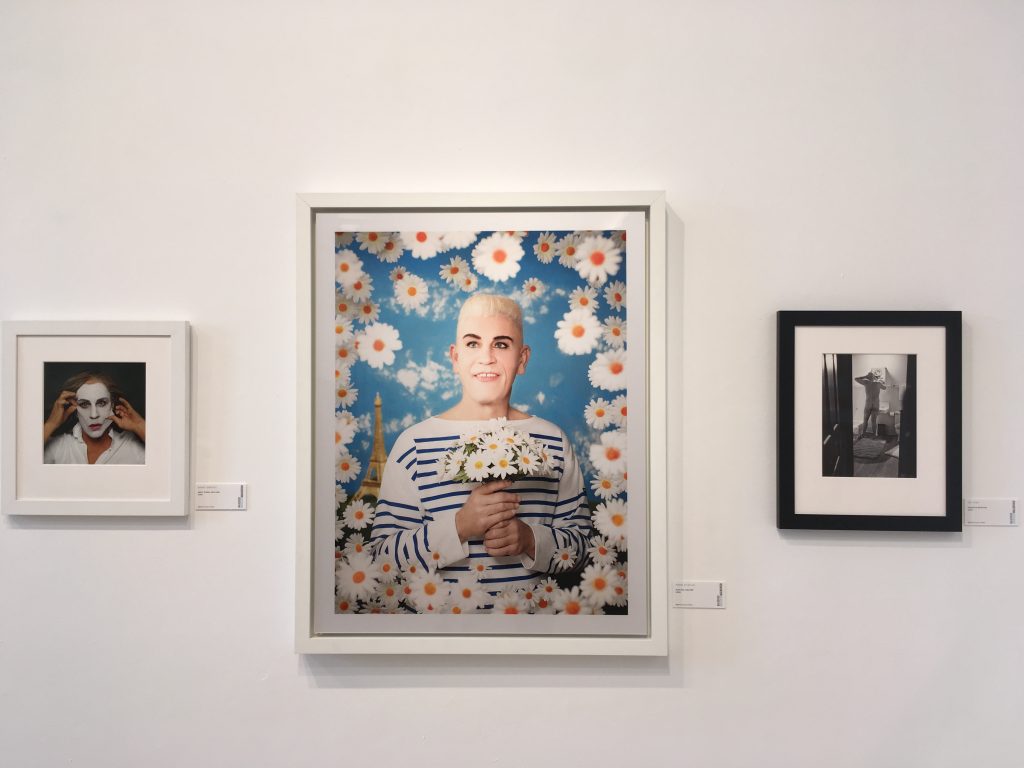 Despite the name of the project, “Malkovich, Malkovich, Malkovich…,” Sandro Miller states that the actor and himself only had secondary role, as all his primary thoughts and ideas were focused on high-quality recreations of the original people pictured. People with their real feelings, emotions, worries, obstacles and life situations they were going through back at that the time the original images were created.,with all the possible attention to the tiniest details and specialties.  Moreover, Sandro denies all rumors that the movie “Being John Malkovich” was on his mind when the idea for the project appeared.

I can close my eyes and these images would come to me. Because these images have been embedded in my brain. I have seen them so many times…

Sandro comments that the main concept was to honor the work of those photographers who impacted his life time profession, thanking for making him the photographer he is now. The project itself also served as a sort of cure for the artist, serving as a source of hope and contemplation while undergoing the most challenging time of his life –  stage four cancer. It was a project Sandro Miller was not sure he would ever be able to share the world with, and it was the only work he imagined taking  up if he ever made a recovery. A celebration of life, friendship and personal work, which Sandro believes to be the one thing keeping him alive, is presented here.

Somehow Sandro Miller’s thoughts prove that our attitude, our mind-set and inner acceptance of a situation do play a huge role, whether we are talking about incurable diseases, great losses or any other difficulties humans have to cope with.

The project took around two years of preparation, and included thorough gathering of all the materials, with endless list of possible details regarding the needed iconic images. From deep understanding of the original subjects’ identities and their view of the world, to knowing the exact locations of where the shots were made, the cameras and lenses used, and even the presence of other individuals at the photo-shoot venues.

Another fascinating part is the personal story of the great friendship between Sandro Miller and John Malkovich.  “We are going to play theater together” –this was one of the first reactions of the actor when Sandro asked him to cooperate on the project. Twenty-seven years of previously working together made the photographer certain that John is the one. In his interview, he refers to Malkovich as his muse, his man, while also describing the similarities between the two men, who are both great perfectionists who never stop before reaching that faultless ideal result.

I myself find it inspiring, and am very thankful that in his interview Sandro takes time to give some priceless advice to today’s generation of photographers. Shining the light on some major problems and misbeliefs, he claims that photos taken on iPhone and retouched by fast learning apps are a poor imitation of those skills which takes ages and nonstop hard work to acquire. Nor does Sandro believe in selfies, encouraging the young generation to differentiate the process of simply pressing the button from actually doing photography, and in fact he views it as nearly criminal to compare the two. “You cannot see the vision of the artist unless you see it in person…” – is the author’s reaction to the mistaken belief that virtually checking out exhibitions, galleries or museums using smartphones may have a chance to ever substitute visiting these places in real life. And this genius quote is the one that this brief overview feels like ending with. 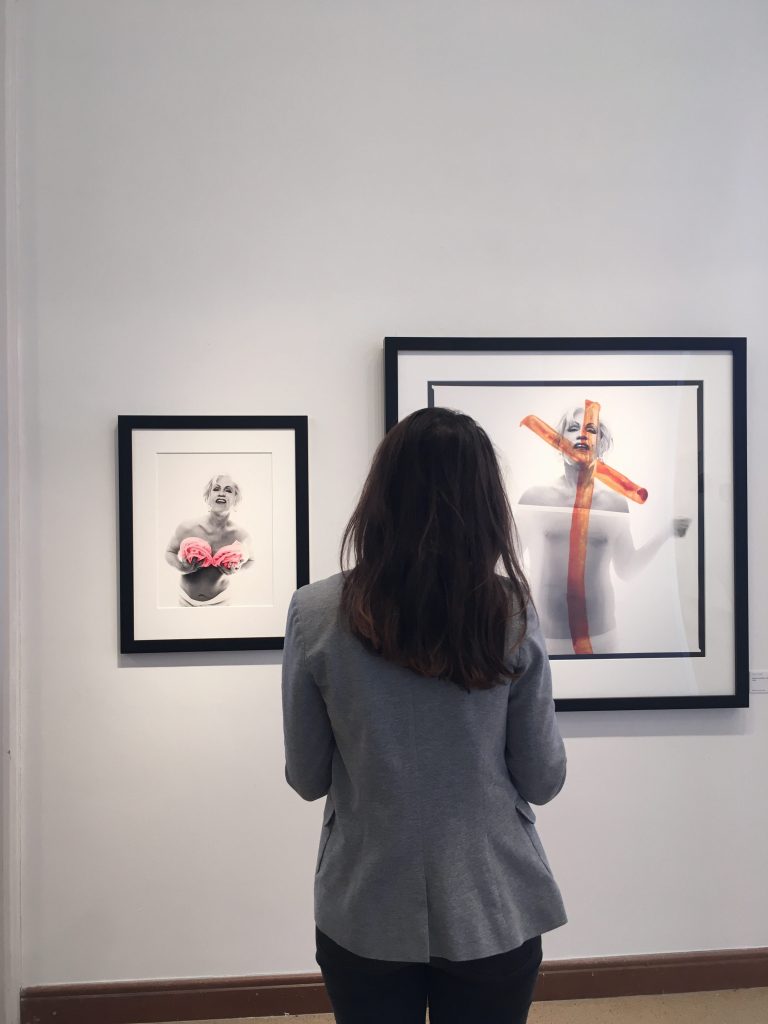 See you at the exhibition! I will be the one wandering around!

Thanks for reading! Till the next article! 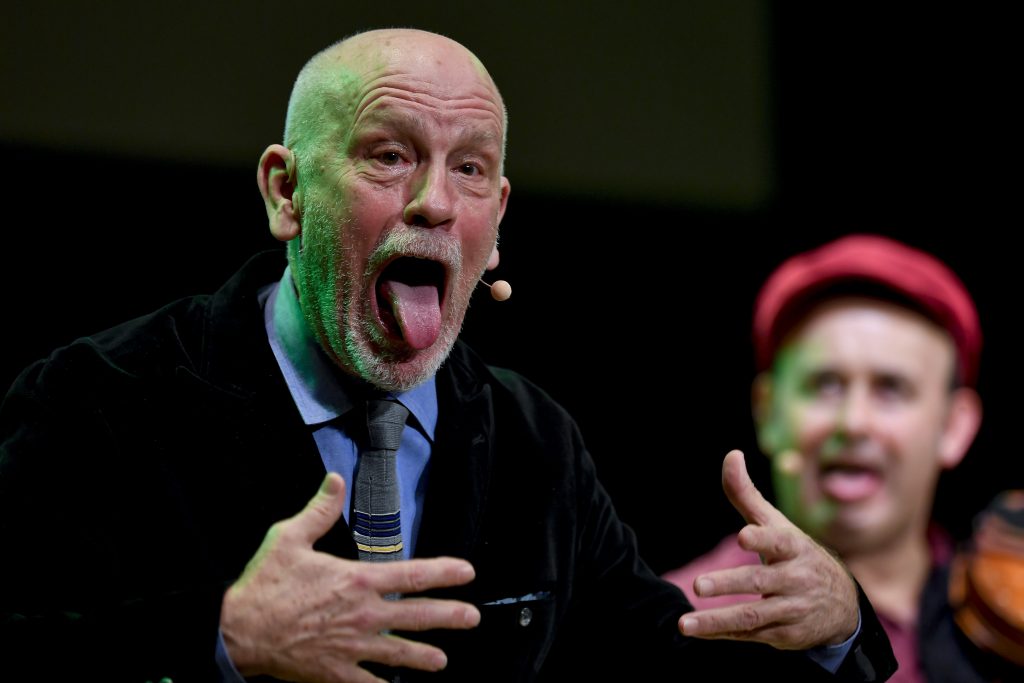 The two-time Academy Award-nominated American actor John Malkovich will take to the stage of the Erkel Theater in Budapest on October 2nd, with a musical stand-up version of The Music Critic. During the performance, the most iconic pieces of classical music will be dissected by a music critic played by John Malkovich, who between each […]
Júlia Tar 2022.07.05. 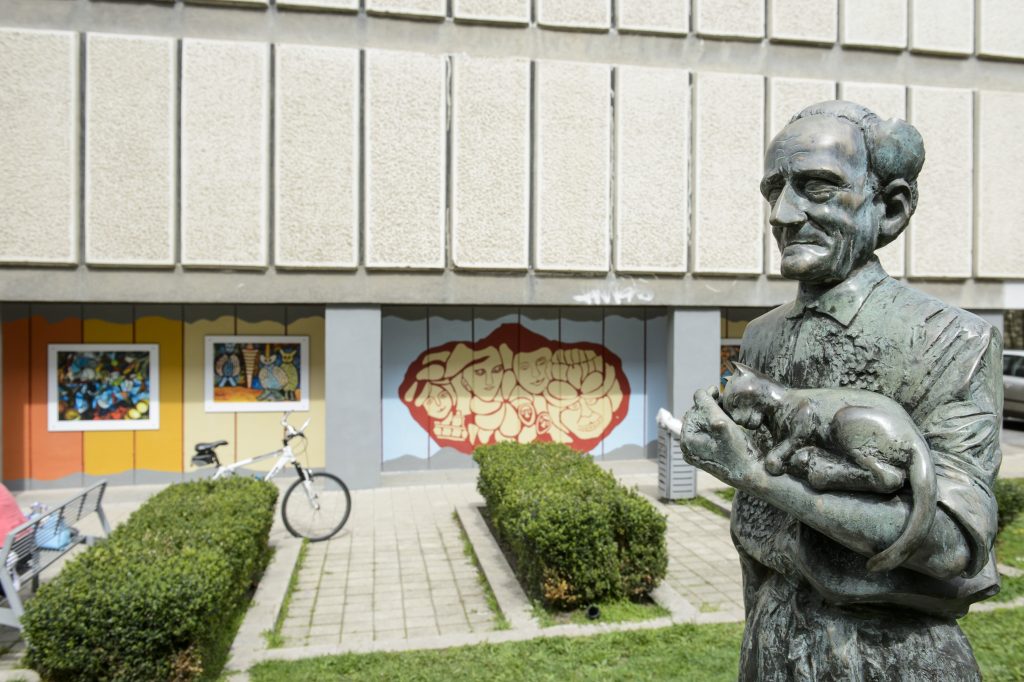 An exhibition presenting the roots and traditions of Roma culture through the works of Hungarian painter and poet János Balázs (1905-1977) has opened in Brussels, the director of the Hungarian Cultural Center in Brussels said on Tuesday. The exhibition showcases the works of Balázs which can be considered the foundations of Roma painting, Adrienne Burányi […]
MTI-Hungary Today 2022.02.16.