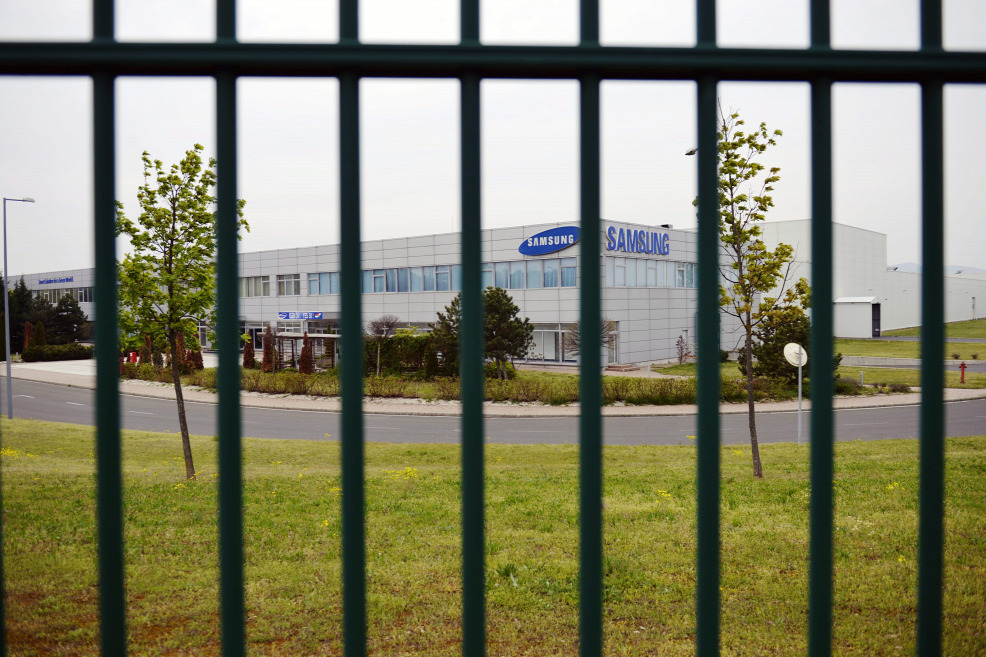 In the wake of the government’s controversial move to establish a “special economic zone,” and to take the management of Samsung’s factory in Göd out of the hands of the town’s (opposition) leadership, the plant announced plans for further expansion to build Central Europe’s largest battery plant with the financial help of the government. The town’s mayor, however, is criticizing the government’s move and the lack of consultations, in addition to the environmental concerns.

Last week, the government designated the location of the plant as Hungary’s first “special economic zone.” This means that the ownership of this designated territory, which includes taxation, will be transferred to the [Fidesz-majority] county assembly. This has raised controversy, as Göd, an opposition-led town, will lose a large part of revenue coming in from the local business tax and the supervision over the plant and its development. In the past few weeks, the government has made many debated changes, resulting in taking away revenue from the municipalities.

This week, it was revealed that Samsung will further extend its factory with generous state support for its development. According to the latest announcement, the factory will switch to making batteries for electric cars. The development will cost HUF 400-500 billion (EUR 1.14-1.43 billion), making it one of the costliest expansions in Hungary. According to the government’s calculations, this would allow the admission of another 2,700 workers.

In addition, the Hungarian government announced it would allocate a further HUF 42 billion (EUR 117 million) to support the development. This will go to the creation of the infrastructural conditions, such as transport, utilities, and energy supply.

Samsung first set up the plant in 2001 and shut it down in 2014 due to the economic crisis and the technology having been outdated. It resumed production in 2017, as electric cars were becoming popular, and demand for batteries increased.

In a 2018 article, government-critical Index showed that works on the extension and its circumstances (noise and environmental concerns) caused uproar and resent in Göd. Some residents even decided to move away, while the previous mayor, József Markó of Fidesz, apparently accommodated Samsung and the central government instead. A recently leaked recording also seems to confirm this, as the former mayor can be heard explaining that for example, those buying up land should hide Samsung’s involvement. This situation turned last October when Markó had to leave office after 13 years, as liberal Momentum’s Csaba Balogh won the seat after criticizing the investment, which met many locals’ opinion and gained their support.

In another development, Balogh, soon after taking office, came under criticism by his electoral allies for being less cooperative and for tending to govern the city on his own. Meanwhile, in a leaked recording he suggested that some of his allies might be involved in suspicious dealings without, however, going into detail. This led to reports filed, but how well-grounded the allegations are, is still unclear, as the opposition only took over the town in October. 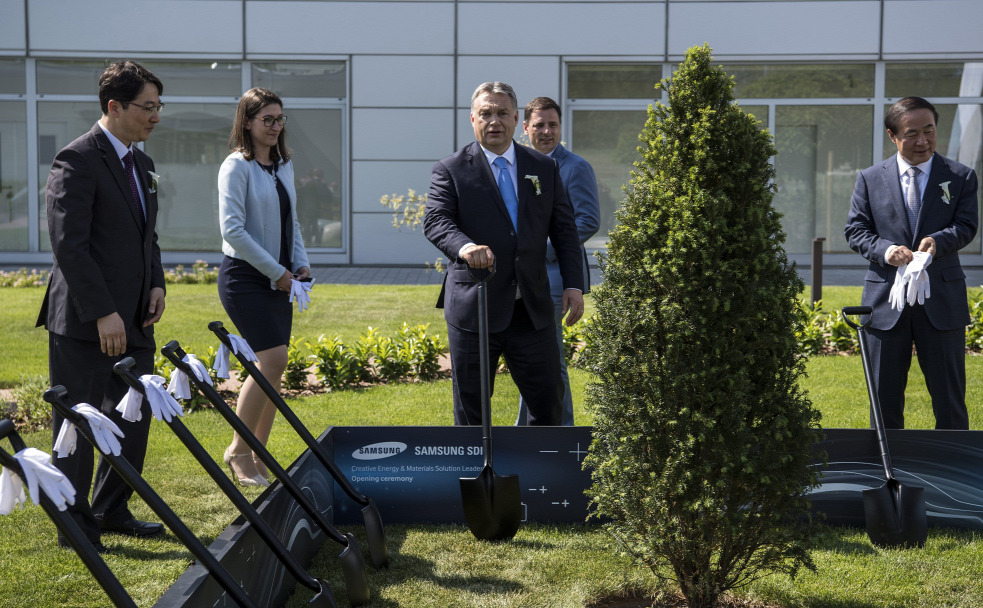 A key investment for the government. Image by Zsolt Szigetváry/MTI

Momentum will turn to the European Commission

On Wednesday, Balogh announced he would to turn to Brussels. “We want Europe to know that, using the epidemic, they can take one third of our town’s tax revenue and one fifth of its territory where a huge chemical plant is planned to be built with obvious damage to the environment. And all this without the locals having any say.”

He emphasized that the MEPs of his party, Anna Donáth and Katalin Cseh will turn to European Commissioner for Justice Didier Reynders and EC Vice President for Values and Transparency Věra Jourová to investigate the case. They will also ask the Commission to examine the lawfulness of the state support granted to Samsung.

According to state secretary Bence Tuzson, in line with a government decree, revenues will be primarily spent on the local region. He told pro-govt state channel Kossuth Rádió that because thousands of people are losing their jobs due to the epidemic, the government is strengthening localities where new jobs are being created, noting the government’s economic protection plan in which 18-20% of the GDP is being reallocated.

According to Tuzson, who is also the region’s MP, the town is currently contending with “political chaos” as the opposition mayor had filed reports against two of his deputies accusing them of corruption, and the deputies have accused him of the same. Tuzson said individual political interests should not override the importance of job creation, adding that such a situation could threaten the livelihoods of 4,600 people.

The minister of foreign affairs and trade also spoke up about the issue. In an interview with tabloid Blikk, Péter Szijjártó argued that the move was necessary because they were negotiating a large, additional investment, something unseen for years or even decades. “Obviously, there’s a need for a much more thoughtful, much broader set of talks here, and not entrusting this exclusively to a not too big municipality. But I have nothing against them, we keep consulting with them as well,” he claimed.

Szijjártó also insisted that if the investment would be realized, Göd and the whole region would greatly benefit from it.

In an interview with liberal 444.hu, Balogh said that the government didn’t negotiate with them ahead of the decision. He also revealed that in addition to the currently-used 40 hectares, Samsung will occupy another 80. As a result, hazardous materials are distributed differently, but due to a government move, locals will now have no say in the changes. 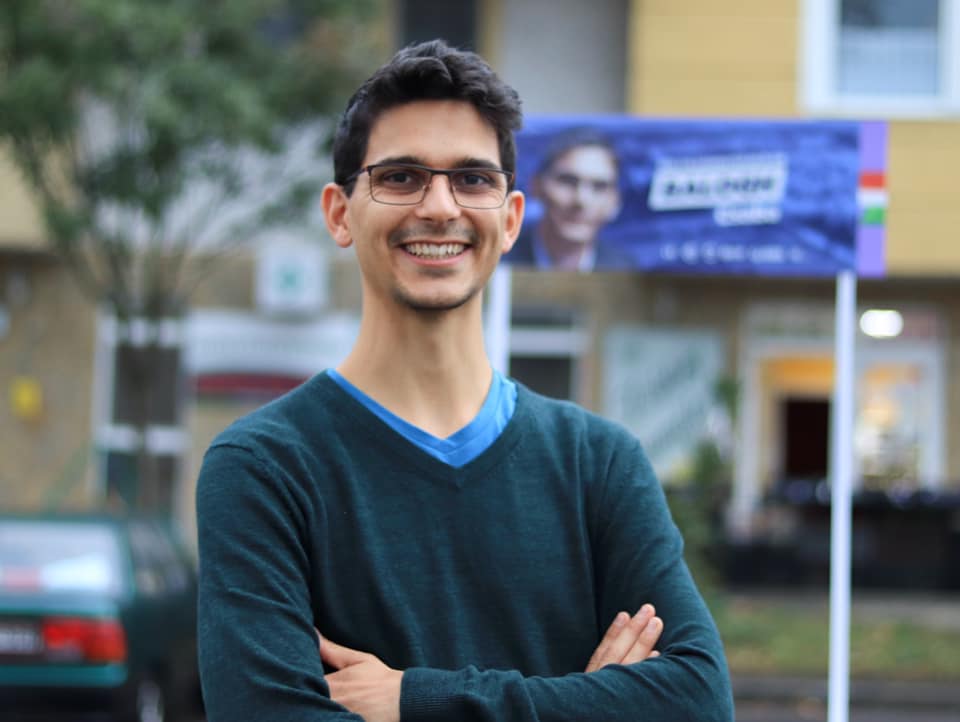 Mayor Csaba Balogh and many locals are however not so happy about the extension. Image by Facebook

He also claimed that at the last public hearing, Samsung revealed that only less than half of its employees are Hungarians and the factory has only one or two hundred employees from Göd, suggesting that the government should have found perhaps an area hit harder by unemployment. According to his calculations, they will lose one and a half billion forints (EUR 4.2 million) due to the government’s move. While in the short-term the city has enough reserves, if the decree remains in effect for long -and that is how it seems for now- Göd could have financial problems.

PMO Head: Göd should not be only locality to benefit from tax revenues

PMO Head Gergely Gulyás said the decision to designate Göd as a special economic zone where tax revenues from local businesses will be primarily spent on the local region would not deprive the locality of money, arguing Göd would continue benefitting from corporate tax revenues.

The PM’s Office chief said it may be worthwhile to cement the solution applied in Göd into law. Göd will not be losing out on any tax revenues, he insisted, arguing that if the government decides to contribute to a major investment in the town, it should not be the only locality to benefit from the tax revenues.