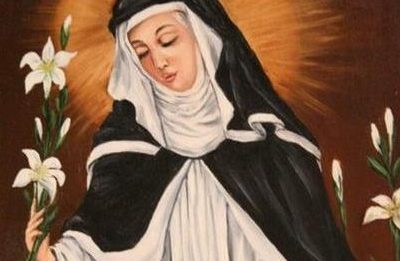 Saint Margaret of Hungary, the daughter of King Béla IV from Hungary’s first ruling dynasty, House of Árpád was offered to God upon her birth, in petition that the country would be delivered from the invasion of the Tartars. Margaret became a Dominican nun and from the age twelve lived in a convent on the island in the Danube near Buda. She died 750 years ago today at the young age of 27 and her life was probably shortened by the extreme penances she undertook.

Saint Margaret of Hungary was born at the time of the Tartar invasion of Hungary. Her father, King Béla IV of the House of Árpád and his wife Mary Lascaris, offered their child to the church in order to free Hungary from the invaders. Their prayer was heard, so the young girl was taken to the Dominican convent in Veszprém. Margaret had begun practicing the religious habit from the age of four, and was not content with simply living in a house of God. She took the austerities practiced by the other sisters upon herself: fasting, hairshirts, discipline (scourge), and night vigils.

Years later, the king decided to build a convent in Buda, on an island in the river Danube – back then named the Island of Rabbits, now known as Margaret Island after Saint Margaret – where Margaret spent her years after the age of 12. Although her family still thought she would marry a royal, she instead became a Dominican nun. She pronounced her vows to the master general of the order, Blessed Humbert of the Romans, in 1255, and took the veil in 1261.

When she was 18, Margaret was asked by Ottokar, King of Bohemia, to marry him after hearing of her beauty. She responded that she had been dedicated to God before her birth, and that she intended to remain faithful to that promise. As a nun, she deliberately sought to perform the services that were most menial and repulsive, and with extraordinary tenderness and charity.

Many of the details of her life are known from the Legend of Saint Margaret, written probably in the 14th century and translated from Latin to Hungarian in the 15th. According to the records of witnesses, she held long fasts, severe scourgings, and other mortifications. Throughout Lent, she scarcely ate or slept. She often spent the nights in front of the Blessed Sacrament instead of sleeping. On the eve of the feasts of the Virgin Mary, Margaret said a thousand Hail Mary’s. She was unable to complete pilgrimages, but she said an Ave Maria for every mile to the sacred shrines and back.

Margaret died on January 18, 1270 at the young age of 27. Her remains were given to the Poor Clares convent in Pozsony (Bratislava), after the Dominican Order was dissolved. Unfortunately, most of her relics were destroyed in the 1700s, but some of them can be found in Győr and Pannonhalma.

Steps were taken to procure her canonization shortly after her death at the request of her brother King Stephen V. The necessary investigations were taken up between 1270 and 1276, but the canonization process was not successful, even though 74 miracles were ascribed to her intercession, most of them referring to curing illnesses, even someone coming back from the dead. She was beatified in 1789, but only canonized by Pope Pius XII on November 19, 1943 on the feast day of her aunt, Saint Elizabeth of Hungary. The feast day of Saint Margaret is celebrated today, on the 18th of January.

In art, Margaret is usually depicted in a Dominican nun’s religious habit, holding a white lily and a book, with a crown by her feet.