Criminal proceedings have been launched against five migrants detained after illegally crossing the Serbia-Hungary border early on Tuesday, a spokeswoman for Csongrád County police said on Wednesday.

The suspects entered the country when some 60 migrants made an attempt to break through the southern border fence at Röszke, at 5.20am and 5.30am on Tuesday. The police said on their website that an armed guard on duty fired three warning shots before patrols arrived at the scene. Police arrested some who had crossed and prevented others from getting through.

At their questioning the suspects admitted to crossing the border, she said. 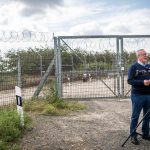