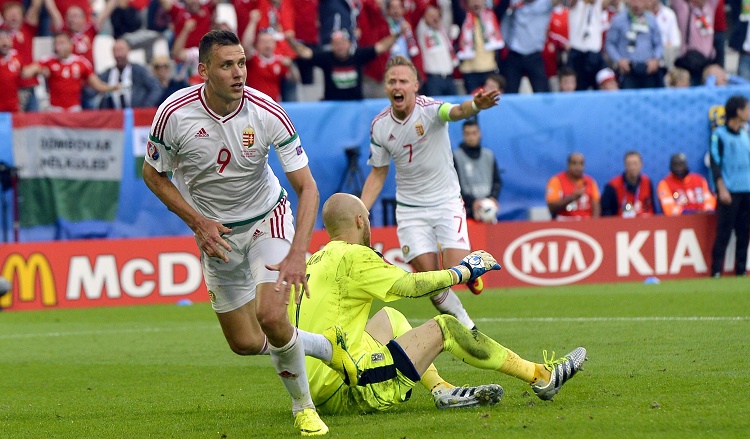 Second half strikes from Ádám Szalai and Zoltán Stieber gave Hungary a 2-0 victory over old rivals Austria at the Nouveau Stade de Bordeaux as Bernd Storck’s team got off to a dream start in UEFA EURO 2016 Group F.

Austria had begun the more composed, almost taking the lead in the first minute as David Alaba struck the post from 25 yards out. Alaba would try his luck again in the tenth after good work from Marko Arnautovic on the left, but his shot failed to unduly test Gábor Király in the Hungary goal.

Having weathered an early period of Austrian ascendency Hungary slowly but surely grew into the game as the half wore on, Szalai failing to guide his looping header on target following a Balázs Dzsudzsák free kick on the left.

Zlatko Junuzovic tested Király with a firmly struck volley after 35 minutes, but from then on the veteran keeper would have very little to do.

Chances had been few and far between but both sides did squander great opportunities to take the lead before the break as play began to get stretched. First, Martin Harnik lost his footing at the crucial moment, Marko Arnautovic having scampered down the left before unselfishly squaring the ball. At the other end, Dzsudzsák screwed wide after being set up by László Kleinheisler on the counter as the teams went in 0-0 at the break. 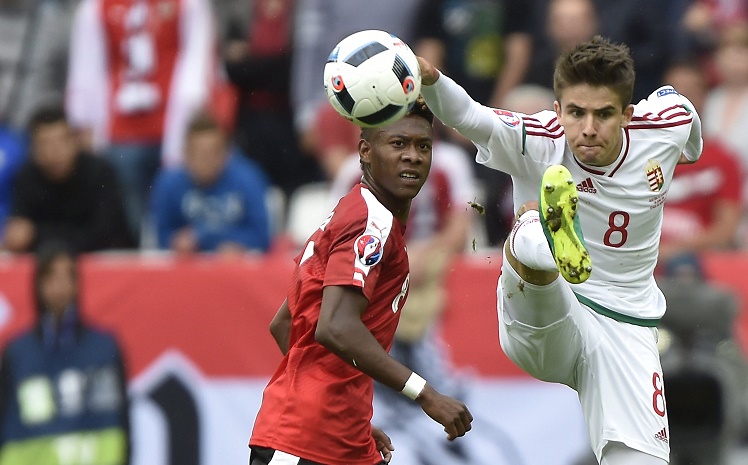 Attila Fiola would be the first Hungarian player to truly force Robert Almer into action, the marauding right back’s shot lacking the power to really test the Austrian goalkeeper. The next few minutes play would see Hungary on the back foot but Austria’s final ball lacking quality. Dzsudzsák would break this spell by forcing Almer into a fine save though, the Austrian keeper punching his fierce 30 yard shot over the bar at full stretch for a corner.

Hungary though, broke the deadlock in the 62nd minute, Ádám Szalai controlling a long pass before carving open the Austrian defence with some great interplay with László Kleinheisler, receiving the ball in the box and coolly sliding the ball under Almer to give his side the lead.

Hungary’s chances of victory improved greatly only four minutes after Szalai’s strike, Dragovic picking up a second yellow for a foul on Kádár in the Hungarian box. From then on the game became ever-more stretched, Hungary going forward whenever possible in search of a second, but wary of over-committing too many players unnecessarily into attack.

Krisztián Németh came close to doubling Hungary’s lead just after the seventy minute mark, a fizzing shot seeing Almer scramble across his goal to tip past the post, and with Austria leaving space at the back as they pushed in search of an equaliser there was always the feeling that Hungary were likely to strike again.

The second goal would come in the 87th minute, Hungary momentarily down to ten men as Fiola nursed an ankle injury on the sidelines. Substitute Zoltán Stieber latched on to a raking pass from Tamás Priskin and headed for goal before chipping the ball deftly over Almer and into the net. With a two goal cushion and time running out for Austria, Hungary held firm to record an impressive 2-0 victory which sets them up nicely for their second match against Iceland in Marseille on Saturday.