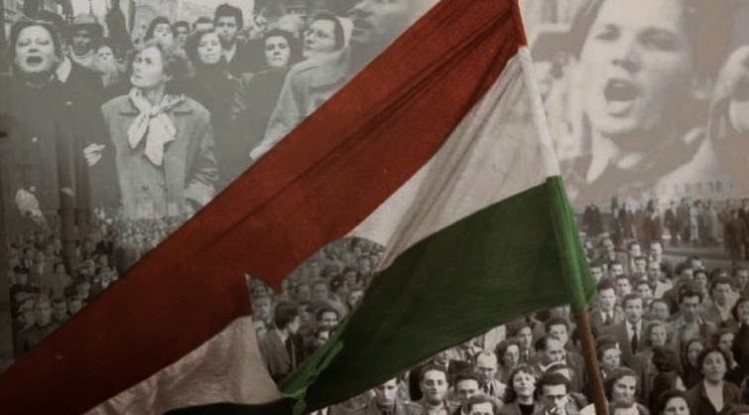 After finishing secondary school in Eger, at the tender age of 17 and a half, I was admitted to the Heves county football club because I was a fairly talented player. At the same time, they offered me a job at the district authority where I was immediately appointed team leader. But I just wanted to play football. In October, we heard on the radio that university students had organised an unauthorised protest joined by a “mob”, and that this insurgency had to be stopped. After a few days, I travelled to Budapest. When I arrived in the Eastern station, a few youngsters wearing arm bands with the national colours were asking for people who had a driver’s license. I said I had one, even for a truck. They answered “come with us quickly”. That’s what I did. The authorities had tried to convert me to certain ideologies but I did not believe everything. 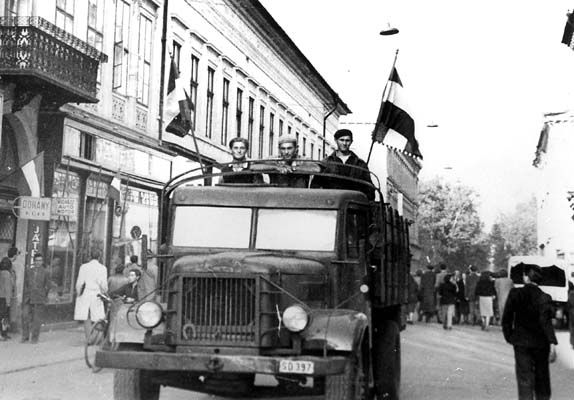 On 23rd October, a group of students gathered and went to the Interior Ministry to demand a free press. The authorities responded with tear gas and a fusillade. That is how the revolution started. My first task was to help feed the freedom fighters. So we went to Szolnok to get food. On the way back, sitting in the truck, we heard a big bang, and a bullet hit the chest of the second driver, a young kid sitting next to me. My first thought was that my bosses at the district authority knew what I was doing. So I floored the accelerator and we surged forward, never stopping until we reached Corvin köz, one of the centres of the revolution. I was in a hurry anyway to get my mate to a doctor. It was only a few weeks later that it occurred to me that the bullet must have been intended for the driver and not the passenger.

The insurgents immediately received us on Corvin köz. Someone shouted “Tell the moustached one (the leader of the revolutionaries’ nest on Corvin köz) that we have a man down”. I was introduced to Gergely Pongrácz. Back then I didn’t know who he was, and had no idea that this would be a friendship leading to joint university studies in Madrid for 4-5 years.

I left my mate with the medics and went on to deliver the food to several locations. If you want to understand my situation, you need to know about my life before the revolution. Back then, the entire country was very poor. Staff was normally transported in trucks and lorries; we sat on benches. That was how the football team travelled, too. I was usually driven by the party chairman in his service car, or his driver came to pick me up and take me to the matches, because he liked my playing. So when I joined the revolution, I initially had a bad conscience. I thought “What would they say if they knew?” But when my colleague was shot in the truck, I decided that I belonged somewhere else; I had to join the revolution. I was so committed that I offered to teach a newbie how to handle a Molotov-cocktail. We had been fighting in the streets for two days when very young boys, more like children aged 14 or 15, came up to join us. We actually had to take them back to their parents and ask them to lock the kids up in their homes until the revolution was over. But that often failed as the boys escaped and returned to us. 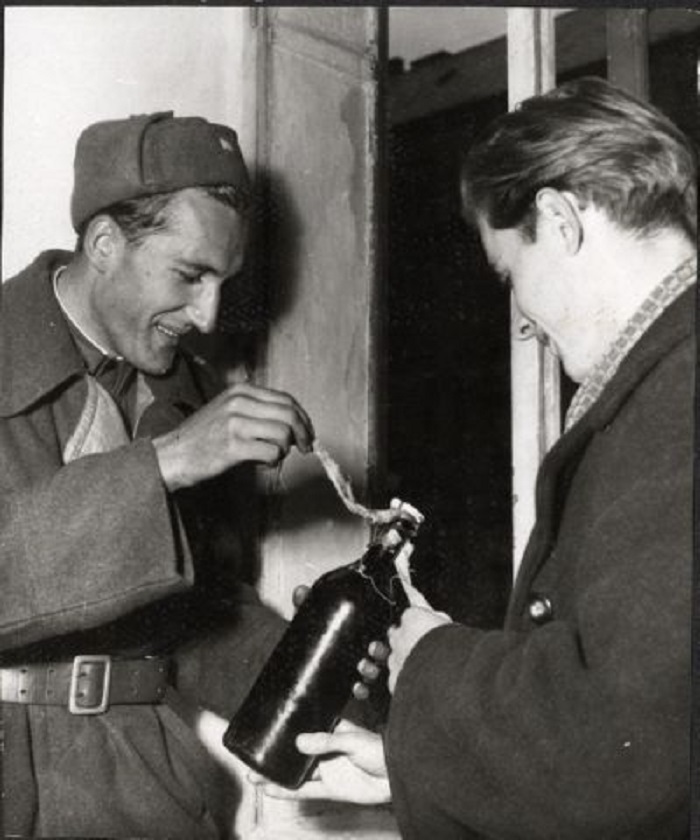 On 28th October, Mikoyan and Suslow agreed with Imre Nagy and Pál Maléter that the Russians would withdraw. We didn’t want anything but be free. That accord practically meant victory for the revolution. A new state based on social democracy and a multi-party system emerged in the dreams of poets and writers. I returned to Heves county. I took up football again and told the others where I had been and what I had done in the past week. At that time, revolutionary councils sprang up across the country. My mates were surprised and said that they had never dared to speak openly before me; they thought I was a Communist because I was transported to and from the matches by the boss. But then came the betrayal. A few days later, Kádár travelled to the Soviet Union as Imre Nagy’s minister without portfolio, and betrayed us, betrayed the revolution, whereas he should have represented the new government. At the same time, the United States also betrayed us. Dulles sent two telegrams to Khrushchev. In one of those, he wrote that the United States were no friend of Hungarians. A few days later, another telegram came, stating that the USA did not approve of Hungary’s plan to leave the Warsaw Pact. That was when Khrushchev talked with Tito and ordered Zhukov to strike down the revolution. Zhukov crossed Hungary’s border three days later, on 4th November, with his new army.

Having worked with Communists and hardboiled Communist bosses for 18 months, I knew that I could not stay in Eger and could not go back to Budapest either. I also suspected what was to come. On 10th November, my friend Gergely Pongrácz left the country too. I had two weeks to think about what to do. I knew that I didn’t want to return to the Communists. I was just 19, so I thought I would find work somewhere. But what about football, the centrepiece of my life so far? Playing football was still all I wanted to do. I decided to leave Hungary as well.

I crossed the Austrian border on 23rd November as a refugee. I got lucky. Still as a refugee, I got an offer from the football club of Grenoble, France. I accepted and went to live there. Even though I was not considered a top player like those in Hungary’s Golden Team, I was accepted and positively received both socially and professionally. In addition to football, I studied hydraulic engineering.

In just two years, Khrushchev was invited to and paid an official visit to France. We, the leaders of the former university students, thought that we had to do something. But what? There were too few of us for a demonstration, and there was no time to organise a movement. So we decided to put up Hungarian flags on the bank of the Seine across the Ministry of Foreign Affairs of France at the time of the visit, so that Khrushchev would know that we were still around. 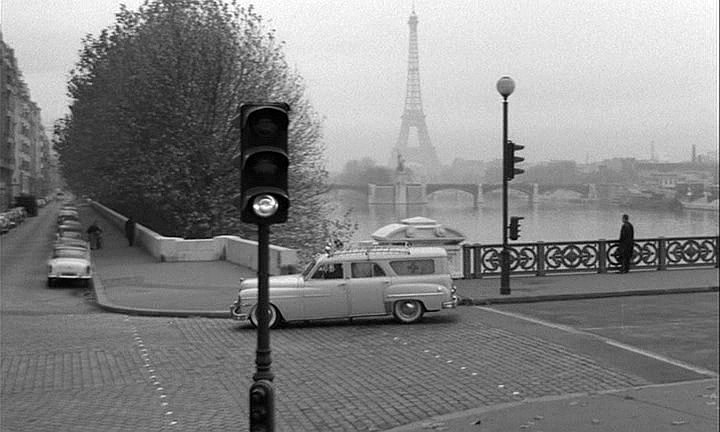 We ordered the flags. Two days before the arrival of the Soviet party leader, somebody banged on my door at 5am I asked who it was, and they said “Police!” I thought it was the secret service. It was their method in Hungary to knock and take you away in just five minutes, and you would not be seen for five years. But I had to open the door. To my surprise, two normal gendarmes stood there, and one of them said: “Mr. Tóth, please get dressed. Calm down, there’s no trouble. Come with us.” I said I had to go to the university in the morning, and I had football training in the afternoon. He reassured me: “Don’t worry, it’s all right. It’s all settled with the university and the football club, and you have been granted a leave from both.”

I thought France was the country famous for “liberté, fraternité, égalité” – where were those values now? I thought that fraternité was still there – the policemen were nice – but liberté had been lost somewhere. As we exited the apartment, I expected a vehicle for prisoners, but I was ushered into a comfortable Citroen. I asked where I was taken. They said “Relax and make yourself comfortable”. I saw that we were heading south, and then arrived at the sea. I saw a nice ship. They told me to board it. There I found all the revolutionary student leaders from 1956 who had been granted political asylum in France. They were taken there from across the country, Bordeaux, Lyon, Paris etc. Several of them approached me, saying “So Józsi, you’re here too. They drove you here as well.” I asked them where we were going in that ship, but they didn’t know either.

The French had found out that we had tried to organise something for Khrushchev’s visit, so they gathered us for a week-long Mediterranean cruise. Never in my life have I experienced such luxury. A week later, when the Russian delegation had gone, they took us back to our homes. Shortly after I got an offer from the Red Star club of Paris, and then I went on to play in Spain’s Atletico de Madrid. 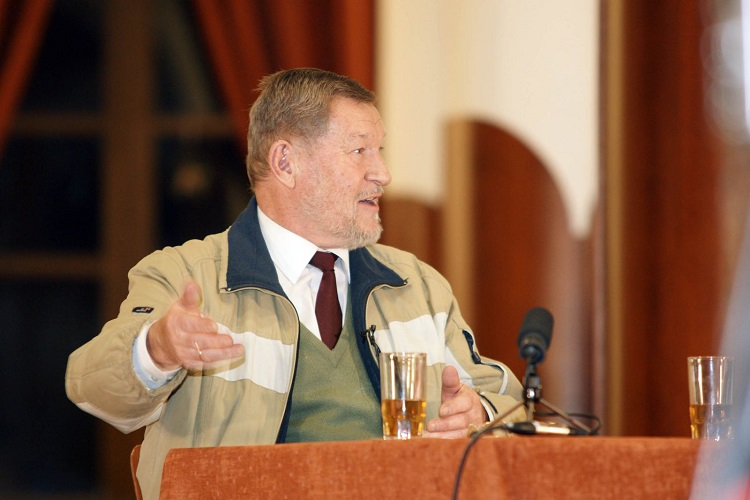 When I arrived, I was surprised to see that there was an “unofficial” embassy of Hungary in Madrid. Aurél, the secretary coordinated the lives of the Hungarians who arrived there. That was where I met my friend Gergely Pongrácz again. He studied politics. I soon joined him in those studies.

We thought we had to do something to keep the memory of the revolution alive. But what should that be? Finally, Aurél, Gergely and myself decided to make a memorial plaque and offer it to the defenders of Alcazar in Toledo. Twenty years earlier, there had been a fight against the Communist ideology in Spain, just as in our Budapest. Every year after that, we travelled to Toledo to place a wreath at our plaque in memory of the defenders of Alcazar and the 1956 revolution. But we still felt that we needed to do more. One thought followed another. I no longer remember who came up with the idea – it could have been myself. We would participate in the traditional Passion Week procession. We dressed up as Nazarenes and made a six-metre white cross with “In memoriam of the heroes of 1956” written on it in black letters.

The others said “Józsi, it was your idea, so you get to carry the cross.” That’s what happened. My friends helped hold the cross, and we marched proudly along Madrid’s Gran Via. The crowd applauded us all along, which was not customary in Madrid. The “Hungarian procession” was on the title page of the following day’s newspapers. Sadly, my friends in Madrid are no longer with us. It’s only me and my memories now.

(József Tóth-Zele’s memories were written down by Enikő Bettina Győri-Náray.)

via: Az Én Forradalmam (My Revolution) 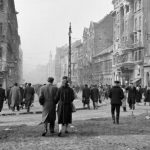 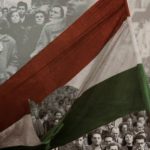