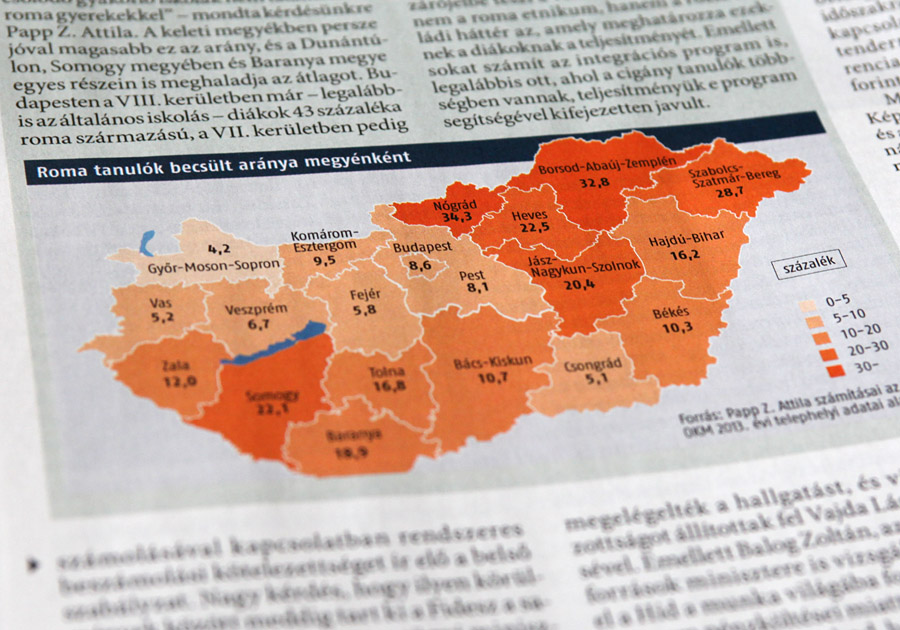 According to teachers’ reports, as many as one in three children in two of Hungary’s nineteen counties have a Roma background, research by the National Academy of Sciences has revealed. The number of children belonging to the Roma minority is growing exponentially not only in the eastern part of the country but also in Transdanubia, according to the report.

The findings, published in the weekly magazine HVG, are based on estimates handed in by teachers on the share of Roma students in their classes under national competence tests. On the basis of the estimates, 15 per cent of primary school-age children have a Roma background; the same figure for the entire capital is 8.6 per cent, but as many as 43 per cent of children in District VIII and 23 per cent in VII belong to the Roma minority, according to teachers. Children of Roma background form the majority of students in 298 of the country’s primary schools.

The share of primary school students belonging to the Roma minority is the highest in the northern counties of Nógrád (34.3 per cent), Borsod-Abaúj-Zemplén (32.8 per cent) and Szabolcs-Szatmár-Bereg (28.7 per cent).

Schools in Győr-Moson-Sopron, Csongrád and Vas counties have the lowest share of Roma children, around 5 per cent.

According to the research, carried out by the Academy’s Institute for Minority Studies, the share of ethnic groups in schools should be taken into account in order to better adapt to the sociocultural background of children because performance declines rapidly where the proportion of Roma children reaches 20 per cent, due to families’ socio-economic status.