Dezső Tandori, a renowned Hungarian writer, poet and literary translator, has died at the age of 80, the Petőfi Literary Museum and the Digital Literary Academy said on Wednesday, citing information from his family.

Born in Budapest in 1938, Tandori graduated from Eötvös Loránd University after which he worked as a dormitory teacher. In 1964, he became a college language teacher. From 1971, he worked as a freelance writer and literary translator.

Tandori began publishing his poems in the 1960s. His first collection of poems entitled A Fragment for Hamlet was released in 1968. His next collection, The Cleaning of a Found Object, is regarded by literary critics as the first Hungarian postmodern poetry collection.

From the 1970s, his works covered a variety of genres, including children’s poetry, crime fiction and philosophical essays.

He also made a name for himself as a literary translator, mainly translating works from English and German.

Tandori’s long list of accolades include the Attila József Prize in 1978, the Laurel Wreath of the Hungarian Republic in 1996 and the Kossuth Prize, which he was awarded in 1998. In 2007, he was awarded the Goethe Medal by the Goethe Institute. Tandori was granted the Artist of the Nation title in 2014. 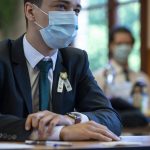