Fidesz: Rejected Asylum Seekers Should Be Forced to Leave Europe

Migrants who are not entitled to stay in the EU should be legally forced to leave it, Fidesz MEP Balázs Hidvéghi told MTI on Thursday, commenting on a debate in the LIBE committee of the European Parliament of a draft report on asylum and return procedures.

Watertight laws are needed to enforce the return of rejected asylum seekers to their homelands, Hidvéghi said, adding that experiences showed that only a fraction of illegal entrants left the bloc of their own accord. “Most leave only to return looking for legal loopholes,” he said.

Hidvéghi called it “naive” to count on voluntary repatriation. Enforcing the EU rules is key to curbing illegal migration, he added.

He insisted that the current “unmanageable” situation was due to the EU’s “lack of determined action in 2015 and since”.

The Fidesz MEP accused the EU of failing to protect its borders and he insisted that “pro-migration political forces and NGOs” were working to turn illegal entry into legal residency.

He said EU border agency Frontex should cooperate with member states on returning illegal entrants to their homelands. 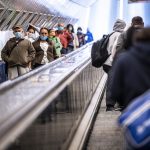