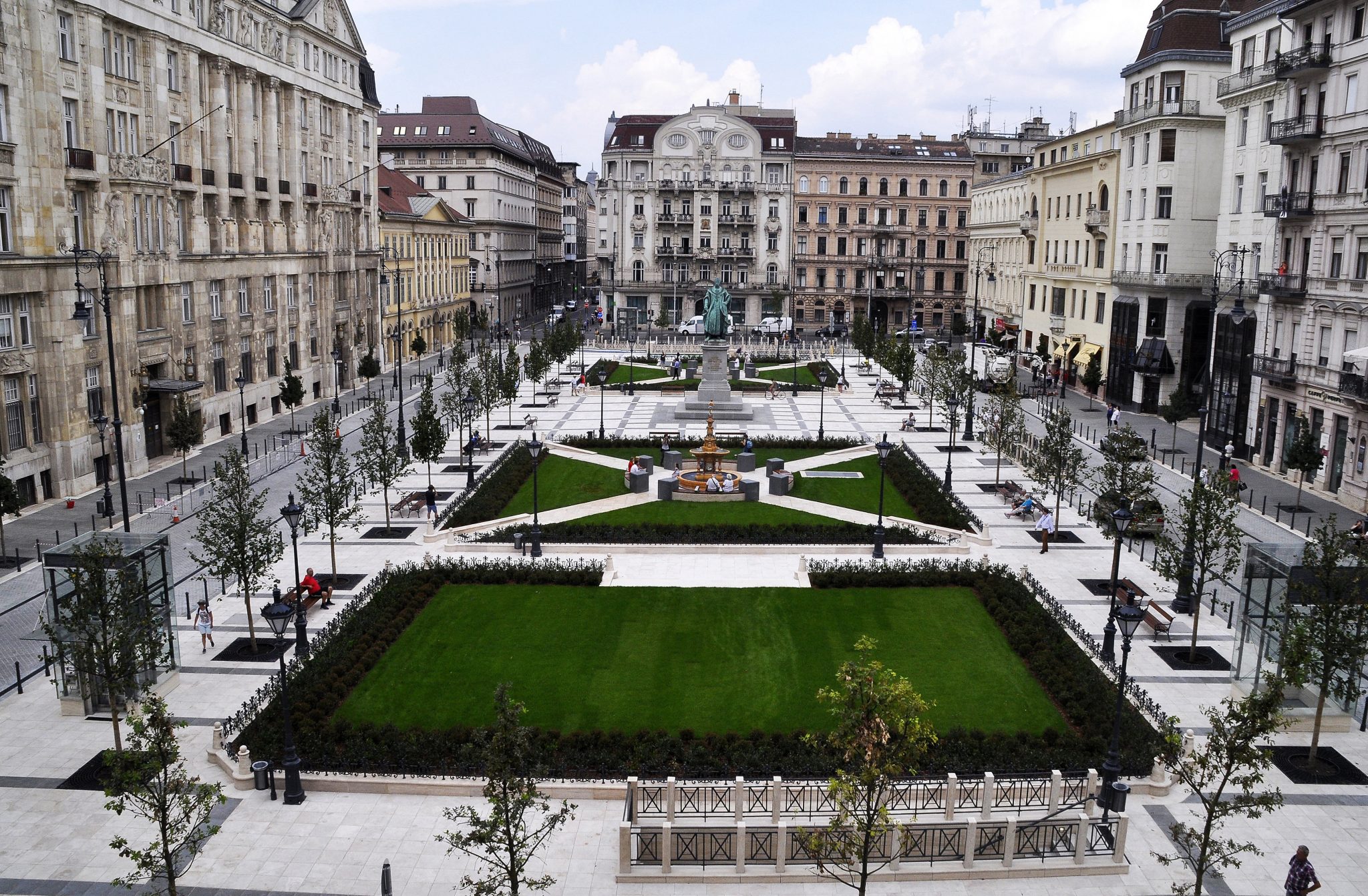 The reconstruction of Budapest’s József Nádor Square started in May 2018 by the V. District Municipality with the support of the Government. The newly renovated square, which had long been ploughed and closed off, has recently re-opened, generating controversial reactions in the Hungarian media and citizens of the Hungarian capital.

According to the municipality plans, the primary aim of the square’s renovation  was to increase the quality of the environment, to further strengthen the community character of the area, and to renew the image of the square in a way that strengthens the city’s new development cycle. Another important requirement was the promotion of pedestrian traffic and the integration of the renewed József Nádor square into the expanding pedestrian network of downtown Budapest. 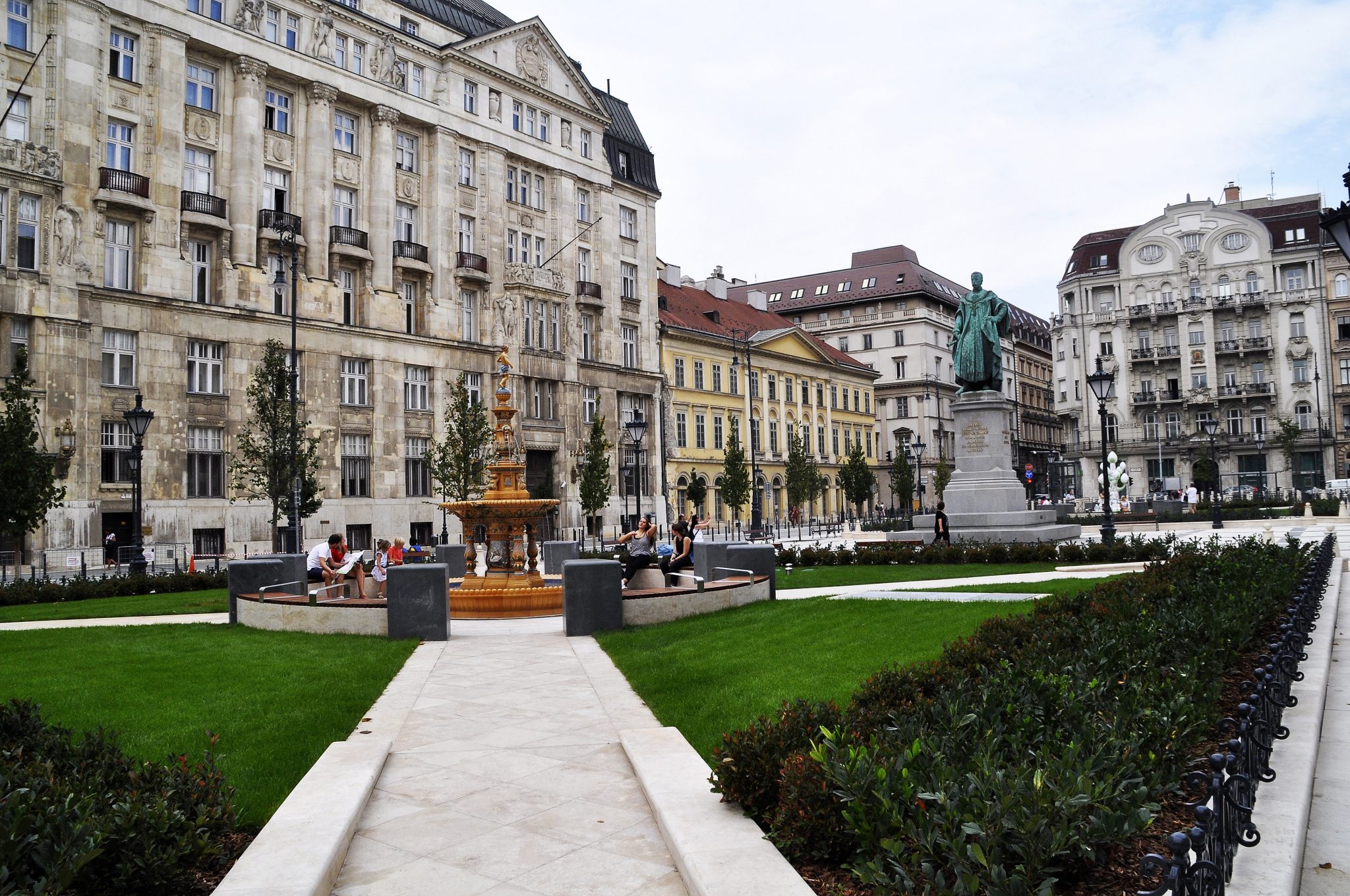 According to the announcement, an important consideration during the redesigning of the nearly 8,500 square meter space was “displaying nature, represented by the installation of green spaces, trees and the appearance of water as a new element on the square.”

One of the most divisive new ornaments of the square is a fountain representing a tree. It is the work of the Herend Porcelain Manufacturer, decorated with their own motifs, called the “Tree of Life.” Critics of the reconstructed place called it super-kitschy and a huge advertisement for the Herend porcelain shop, situated in the corner of the square.

The tree is not newly made, and for several years now, a variant has been on display in a Veszprém roundabout. 24.hu noticed that the designer of the art piece has clarified on Facebook how much she had to do with the new tree and for what it was originally designed. Etelka Meixner-Hegyi draws attention to the fact that this statue was technically designed for József Nádor square, but she did not plan the original to be placed there. She emphasized that porcelain-making is basically a duplication process (that is, making multiple copies of one casting), so it is true that this particular statue was newly made and placed in the square in Budapest, but it is not how she specifically imagined it.

The Facebook post – which since has been removed from the social media site by the author – said that the original plans were made in 2008, during the Gyurcsány government, for a roundabout near the Veszprém Arena. It was designed to have a “strong advertising effect” and its final form was influenced by the fact that it was planned to be placed in a roundabout: it has a more robust form to be able to resist weather conditions, and the hand-painted motifs – characteristic of the Herend style – were also left out so that it wouldn’t become too kitschy. However, this new statue is decorated with a hand-painted Rothschild pattern in contrast to the original Viktória motifs.

On the other side of the square, there is a Zsolnay fountain, designed by experts of the Zsolnay Porcelain Manufacturer, after reviewing the plans of the square. The manufacturer dreamed of a replica of the Hercules Bath Fountain to be placed in Budapest square.

In addition to the porcelain fountains, the statue of József Nádor, the Archduke of Austria and the palatine of Hungary. The statue is one of the oldest non-sanctified statues in Budapest, made in 1859 by sculptor Johann Halbig, Munich of the palatine, who had a great role in the landscaping of Margaret Island, City Park and the Castle Garden. 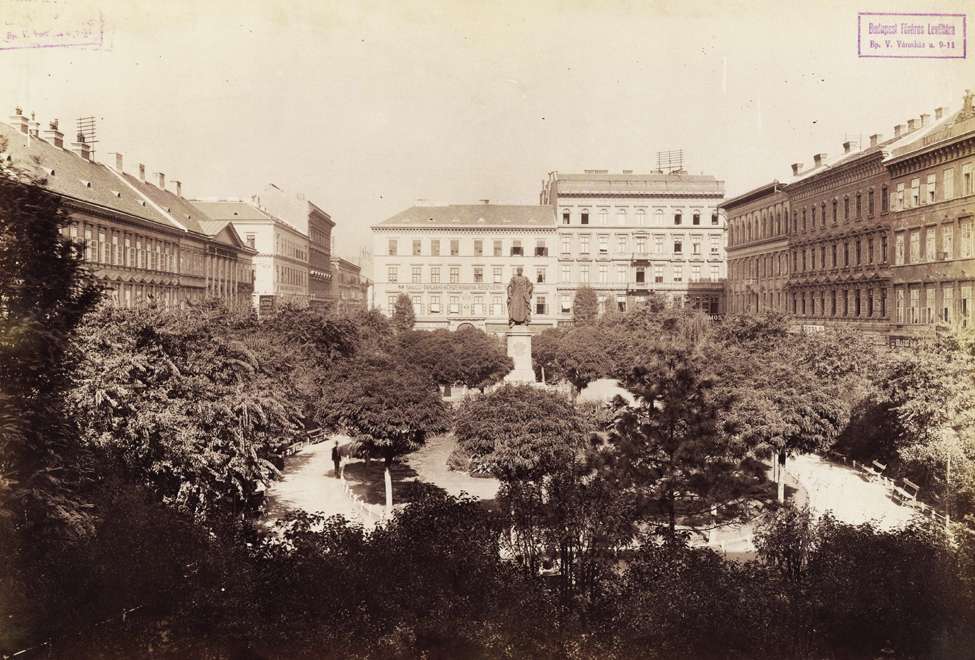 Although the park was previously known for its large green spaces and huge deciduous trees, as it was portrayed in old photographs from the turn of the century, the trees were all cut out at the start of the project despite many protests against the decision. According to the municipality, as part of the investment, 54 new trees were planted with new grass and low-growth mulch plants about 2 meters wide. Nonetheless, critics of the renovated space noted that much of the park was still paved with stone, even though the purpose of the reconstruction was “to display nature and install more green space” in the heart of the capital. (On the other hand, the planned strengthening of the place’s community character seems to be successful).

The 54 newly planted trees are still small and do not give enough shade, but investors say they will grow later. However, Sándor Bardóczi, a landscape architect and chairman of the Levegő Munkacsoport (Clean Air Action Group), an organization that protested against the felling of the existing trees, said to news portal Index.hu that “we can hope that the momentarily weak and small trees planted on the square will grow big from the caressing of the sun’s rays, but the fact is there was only two and a half meters of ground above the underground garage, and at such a small place, above a certain level the trees are no longer able to grow.”

Under the square, OTP Real Estate Zrt. has built a three-story, underground parking garage for more than 500 cars. Many had already protested against the underground car park, but now, in addition to the garage, surface parking spaces have been set up on both sides of the road for the local population as well.