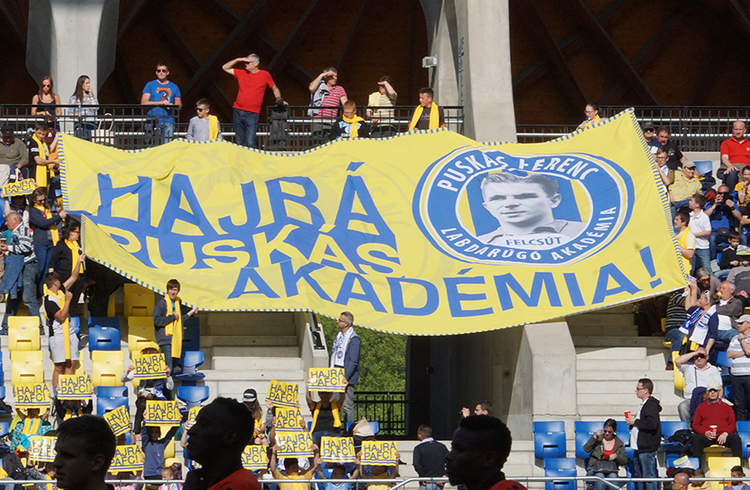 On a tense final matchday of the Hungarian top division season it was Vasas Budapest who claimed a crucial victory to secure their place in next season’s OTP Bank League (NB1).

Any other result than a win would have seen Vasas relegated because rivals Puskás Akadémia – one point behind before the last match and occupying the last relegation place – defeated Honvéd 2-1, but the club from the Angyalföld district of Budapest did all that was asked of them in posting a 2-0 away win over MTK thanks to second-half goals from Máté Vida and Ievgen Pavlov. Vasas therefore finish on 32 points, one in front of Puskás Akadémia who will join fellow relegated side Békéscsaba in Hungary’s second tier next season.

After that defeat to Vasas, MTK have fallen to fourth spot in NBI but will still qualify for the Europa League qualifying rounds due to Újpest’s ban from European competition without which they would have taken that European spot having reached the Hungarian Cup final where they will take on league champions Ferencváros who are already preparing for the Champions’ League qualifiers.

Újpest, in second place at the start of the spring season, concluded a disappointing league campaign in 2016 by losing 3-0 to visitors Videoton which left them sixth overall. Vidi, meanwhile, secured a second-placed finish in Ferenc Horváth’s first season in charge – indeed, the former Hungary striker only took over in October so will surely look forward to mounting a title challenge next time when they would look to regain at title they last won in 2015.

Debrecen’s goalless draw away at basement side Békéscsaba made sure of third position and a place in the Europa League alongside Videoton and MTK while Haladás missed out altogether, Roland Kovács’ 31st-minute own goal against Ferencváros condemning Géza Mészöly’s team to a first defeat in seven matches and a 5th-place finish this season. Although Fradi striker Dániel Böde didn’t score this time, his 17 goals this campaign were enough to take the league’s top goalscorer prize, the first time a player from the club has won the award since József ‘Csöpi’ Dzurják in 1990.

Elsewhere, in a mid-table clash of less consequence than the other fixtures, ten-man Paks arrested their recent current form with a 2-0 away win at Diosgyőr, Laszló Bartha and Tamás Kecskés scoring either side of Lajos Bertus’ 79-minute dismissal. 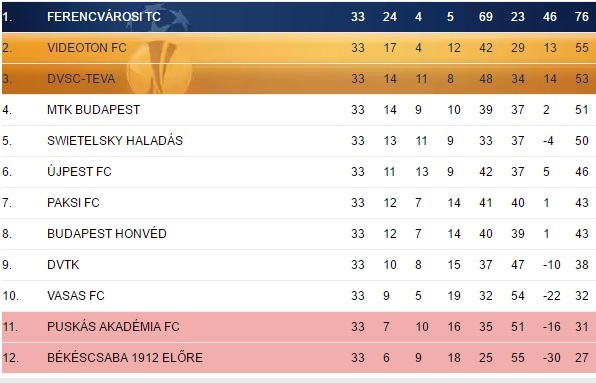 The last game of the 2015/2016 club football season in Hungary will take place next Saturday when title-winning Ferencváros take on arch-rival Újpest FC in the Hungarian Cup final.