So far some 396,000 Hungarians have sent back responses to questions posed in the “National Consultation” public survey launched last month in connection with the novel coronavirus epidemic and rebooting the economy, a government official said.

Responding to a question in parliament, Csaba Dömötör, State Secretary at the Prime Minister’s Cabinet Office, said the survey would give the government a clearer picture of its most popular measures taken in response to the epidemic.

He said the government did not understand why the left-wing opposition was “trying to prevent people from expressing their opinions” on the epidemic and the government’s related response measures. “If they couldn’t contribute anything to the unity that was needed in responding to the epidemic then they should at least not hamper the dialogue,” he said. 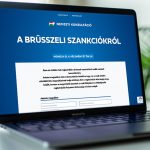