Hungary’s investigative prosecution service (KNYF) has questioned Fidesz MP György Simonka as a suspect in connection with its probe of organised crime that caused big losses to the budget, among other crimes.

Chief investigative prosecutor Imre Keresztes said in a statement on Thursday that Simonka had made a complaint concerning the charge, denied criminal activity and said he would make a statement later.

The speaker of parliament’s order suspending Simonka’s immunity was received on Monday, he said. The KNYF and the National Bureau of Investigations raided several properties this week, seizing equipment and assets, he said.

According to the charges, Simonka obtained aid from the European Union and the Hungarian budget unlawfully by exploiting fruit and vegetable producers and organisations. The estimated losses incurred to the budget exceed 1.4 billion forints (EUR 4.3m), it added.

Based on charges brought by the national tax authority’s (NAV) anti-money laundering unit, the Prosecutor’s Office has so far questioned 34 people as suspects, none of whom are being detained.

On October 29, parliament voted unanimously to suspend Simonka’s immunity at the request of the public prosecutor, Péter Polt.

Simonka and his associates are suspected of inflating the price of investments and assets by buying real estate cheaply and then, after minimal development, quoting fictitious valuations. At the end of 2009, he started building up a circle of accomplices for unlawfully accessing grants. NAV launched an investigation in mid-2014 and the case was taken up by the KNYF in February 2016. 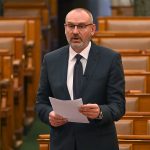