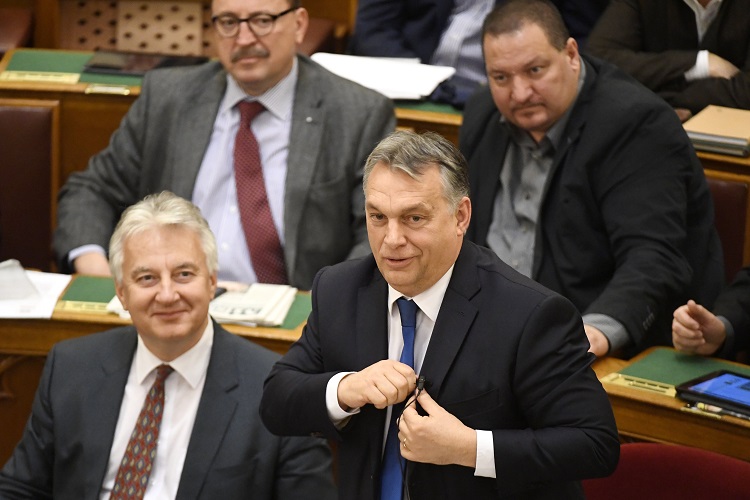 In an interview on Christmas Eve, Hungarian Prime Minister Viktor Orbán described Hungary as “an island of stability in the western world, which is in turmoil.”

He claimed that Hungary’s ‘stability’ is due to the fact that his government has “asked for people’s opinion and protected the country from illegal migration in 2015 and 2016.”

Talking with regional newspapers published by press group Mediaworks, the Prime Minister said that his goal is “to make Hungary a winner.”

Discussing the recent terror attack in Berlin, Mr. Orbán claimed that “it is unprecedented for Christians to be killed in the heart of Europe at Christmas time.”

According to the Hungarian premier, this has been a year of “rebellion” in the UK and the United States, the world’s two model democracies; in his view, no one a year ago would have believed that Great Britain would vote to leave the EU and that “the Clinton clan, the traditional party of American left-wing intellectuals” would be defeated in this year’s American presidential election. According to Prime Minister Orbán, 2017 will be a “year of rebellion” in western democracies.

He also argued that a change in EU migration policy was clearly necessary, that borders must be strengthened, migrants in Europe illegally must be deported, and that the current influx of migrants and refugees needs to be stopped. In addition, Mr. Orbán claimed that while Western Europe has been taking in migrants for decades, their integration has been “an obvious failure.”

Continuing his criticism of Western Europe and the EU, Mr. Orbán claimed that “the European dream is over.”

He argued that a “general feeling of austerity” has taken hold, and that crime and terror threats have cause people in several western European cities to lose their sense of security. According to the Hungarian Prime Minister, western leaders have been unable to find solutions to growing problems such as slowed economic growth, crime, terrorism, and migration.

Describing Hungarians, he said that “We are people with origins in the east but we belong to the western world.” Consequently, according to Mr. Orbán, the West’s success is in Hungary’s interest; however, he warned that the rest of Europe should “not want to change us, but accept and respect that we are Hungarians and will remain Hungarians.”

Continuing his vein of attack on ‘the West’, Mr. Orbán claimed that his country has no need to adopt all Western European practices, and that “everything that’s bad must be resolutely rejected.”

Moving on, Mr. Orbán said that his government’s main goal for the coming year would be to increase wages in Hungary; for that reason, he said, the government will be reducing taxes on employers in order to make way for a higher minimum wage.

Responding to a question regarding the re-nomination of current President of Hungary János Áder for a second term, the Prime Minister said that President Áder is “highly respected” in Fidesz, and that he will naturally be nominated if he is willing to serve for another term.

Mr. Orbán also claimed that health care and education reforms have not slowed down, despite claims to the contrary. He said that wages for nurses and doctors will gradually be increased in the coming two years, and claimed that 71 hospitals had been revamped already. In addition, he said that new schools are being opened, and that pay for teachers has increased by 50%.

While there have been repeated and serious allegations of corruption among ruling party politicians in the past year, Mr. Orbán said that he wished to make it clear that “we do not tolerate abuses of power.” While he did not address any specific allegations, according to the Prime Minister, the reason that there is money in the budget for increased pensions, family support, and free textbooks for children is that he does “not tolerate money being stolen.”

Via Hungary Matters and MTI