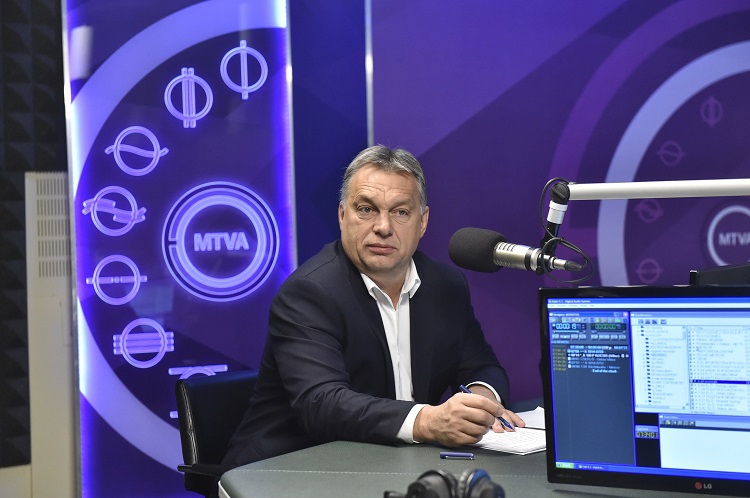 “We can be proud of the fact that it is only in Hungary that people have been asked about the issue of immigration; we did the right thing and the Hungarians acted bravely in this matter”, Prime Minister Viktor Orbán told public radio in his regular Friday morning interview. “According to Hungary’s standpoint, there are issues, issues of identity, that nobody, including the EU’s legislation, can affect; these are the fundamental questions of our national existence and if they can be affected by others then we are not the masters of our fate, and this is something we cannot accept”, Viktor Orbán said.

The Prime Minister highlighted the fact that at the referendum the will of 3.3 million people pointed in the same direction and this is a larger mass of people than has ever given a vote of confidence to any political party in Hungary. 98 percent of voters said that Hungary cannot give up any part of its sovereignty and the question of who we should live with must be decided here. With reference to discussions concerning the constitutional amendment, Viktor Orbán said that currently the most important thing on Hungary’s agenda is preventing the migrants’ mandatory relocation to the country. In reaction to harsh criticism from Sweden (and other Western member states) over Hungary’s migration policies, the Viktor Orbán said: “How dare the Swedes say they are paying us money?” “Hungary is assenting to customs-free trade, we have allowed Swedish capital in, and so it is impertinence to claim that they are giving us money”, Orbán insisted.

Viktor Orbán also spoke about the upcoming 60th anniversary of Hungary’s 1956 revolution. He reminded the public radio’s audience of the fact that 1956 is about freedom, which can be endangered by many factors including if “foreigners whose habits and whose concept of life is totally different from our own appear within a country’s territory without any kind of control” and transform our free society against our will. It is difficult to talk about 1956 and about freedom while disconnecting that from what is happening today, he said. We are grateful to the President of Poland for coming to Budapest to attend the 23 October commemoration, because although 1956 was a Hungarian war of independence, the Polish were also involved and this is something we will not forget, he added.

Regarding the prospects of the Hungarian economy, Viktor Orbán said that there is always heated debate about whether or not the economy is moving in the right direction, this is an “integral part of democracy.” “It is an impressive change that people from outside Hungarian politics have also stated that the Hungarian economy is in good condition and have recommended that investors should once again not hesitate to come to Hungary” Orbán said. “Unemployment in Hungary is now under 5 percent, meaning we are approaching a stage where we must tackle a shortage of labour”, he said. “The Government had previously promised to create one million jobs over the course of ten years; six years have passed and we are now at 660-670 thousand, meaning the chances of success aren’t bad at all”, he added.