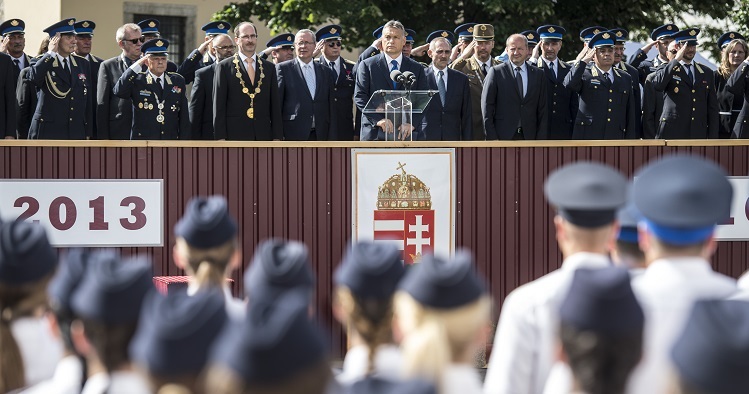 Today Hungary stands for order in an ever increasingly disorderly Europe, Hungarian Prime Minister Viktor Orbán has said at an inauguration ceremony of newly-graduated police officers in Budapest on Sunday.

Many European leaders are failing to undertake the struggle against modern mass migration and against the influx of illegal migrants, the Prime Minister said, arguing that this results in the decay of public security, the threat of violence and general dissatisfaction. Hungary has embarked on a journey in the opposite direction, and in the past few years millions of Hungarians have recovered their belief in a country that is safe and liveable, he claimed in his speech to graduates of the National University of Public Service. “Today’s disorderly Europe is incapable of finding solutions to the borders besieged by illegal migrants or the flourishing business of people smuggling; not to mention the challenges posed by terrorism. In the future, countries which maintain order, provide security and uphold legality will have an advantage,” he said. Without order, there is neither economic growth, nor investments or “a good life”, Mr. Orbán insisted, telling his audience that “the more you are able to preserve order and orderliness in Hungary, the more Hungary’s position in the rase of nations will improve”.

Regarding British voters’ choice to leave the European Union, Mr. Orbán said that Britons had opted to take their fate back into their own hands. “They are not any longer asking for any lectures,” he said, adding that they had become fed up with uncertainty and paralysis. Britons were also beginning to feel estranged from Europe, he said.