PM Orbán: Hungary Must Defend Itself Against Five Major Attacks In 2017 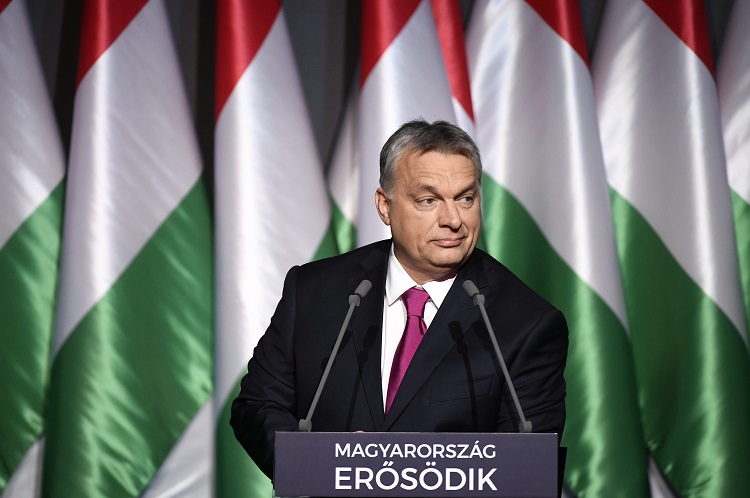 History in 2016 “ignored all predictions” and “took a sharp turn”, the Hungarian Prime Minister said in a state of the nation address on Friday afternoon. Viktor Orbán said Europeans who had been “silenced by political correctness” and “whose voices had not been heard” had rebelled last year. 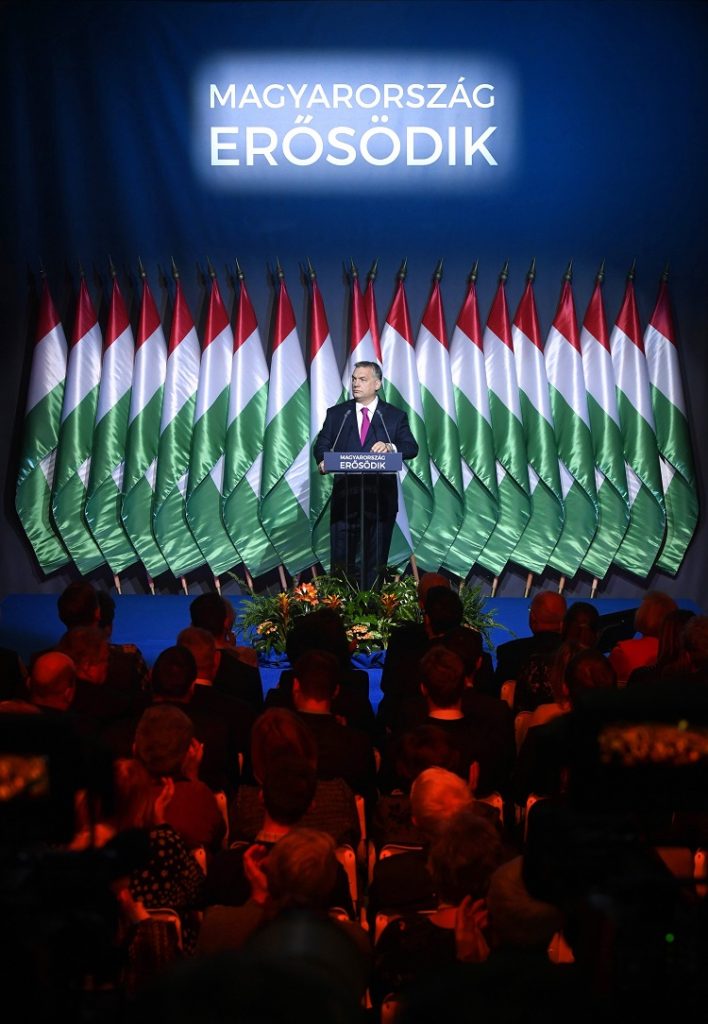 The Prime Minister mentioned Brexit, the US presidential election, the “ousting” of the Italian government and Hungary’s migrant quota referendum as examples of people expressing that they had had enough of “smugness and self-righteousness” and of “being force-fed” utopian ideals. Orbán said that in spite of the European Union’s current prosperous state, the future “casts a shadow on the present”.

The Hungarian Premier said the “battle lines” of last year’s “revolts” had been clearly defined: nations rebelled against globalists and the middle class rebelled against its political leaders. Orbán said that in the EU this translated into a conflict between sovereign countries and “unionists” and between voters and “Brussels bureaucrats”. Orbán blamed political correctness, which he called the “political thought police” of the West, for the “revolts” of 2016.

Hungarians were “perhaps the first to revolt, in 2010,” Viktor Orbán said, adding that Hungary has since then developed a political and economic system of its own, one “tailored to our needs and taste”.As examples for Hungary’s “revolt”, he mentioned “sending home” the International Monetary Fund, taxing multinational corporations and cutting household utility fees.The Prime Minister emphasised that although the former U.S. administration, Brussels and “even Berlin” had declared that the migrants must not be halted, Hungary’s government resisted, built a fence along the southern border and stopped them, protecting Hungary and “incidentally Europe”. “Of course, Hungary will grant safe haven to genuine refugees, those who want to find here the Europe they had lost at home,” Orbán said.

Viktor Orbán said Hungary’s future was secure, arguing that the country was making progress and getting stronger. “Tomorrow doesn’t cast a shadow on today,” he said. “We have no reason to be nervous about tomorrow.” He said that if everyone completes the tasks assigned to them and obeys the law, “there won’t be any trouble” and everyone can take a step forward each year.He said Hungary’s main task in 2017 would be defending itself against five major “attacks”. This will require new national policy, he said. Among the “attacks” he listed Brussels’ “agenda” of making Hungary roll back its public utility fee cuts scheme. Migration will also remain on the agenda, he said, adding that the question would be whether Hungary can ban migrants from moving around the country freely until their asylum applications had been ruled on.

Orban said Hungary would also have to tackle “the increased activities of international organisations” and attempts by foreign entities to gain influence in the country. He said the fourth and fifth “attacks” would be launched against efforts to keep tax regulation and the implementation of job creation schemes as national competencies.
Orbán also said Hungary had “finally managed” to overcome its “culture of self-pity” and adopt a “culture of action”. He said Hungarians had suffered enough from “unstable, impotent and dull” leaders, who had always found ways to explain why “we couldn’t have certain things”. He said self-pity, which he called the culture of the past Socialist governments, had been a “curse” on the country. He said a sign of good governance was that when the public’s goals are accomplished, the people think they did not even need their leaders. “Let 2017 be a year at the end of which we think that was a piece of cake,” the Prime Minister said.

During the Prime Minsiter’s speech, about one hundred supporters of the leftist opposition Együtt (Together) party gathered in Budapest to demonstrate against government policies near the venue of Viktor Orban delivering a state of the nation address on Friday. The group received the audience arriving at the event with boos and hisses.

“We are booing and hissing at Viktor Orbán because he can no longer be approached, does not answer the questions of journalists and no longer enters into discussions with politicians,” Együtt leader Peter Juhász said. Viktor Szigetvari, head of the party’s national political council, said that “Hungary can only earmark funds for a Museum Quarter, the Olympic Games or a new nuclear power plant because Orbán neglects modernisation, education and health care.” Deputy leader Nóra Hajdú said that “Hungary’s worst enemy isn’t Europe but its own prime minister”.

Other opposition parties voiced criticism of Prime Minister Viktor Orban’s state of the nation address on Friday, saying that he had failed to address Hungary’s problems.

The radical nationalist Jobbik party said that important issues such as corruption and the “smear campaigns” launched against his political opponents were missing from Orban’s speech. Parliamentary leader Janos Volner said that Hungary’s economic capacity is fundamentally based on EU funds, money transfers from Hungarians working abroad and the car industry. Volner said the missing private pension funds belie Orban’s assertion that Hungary’s future is secured. The prime minister carefully avoided speaking about the problems of health care which his government was unable and unwilling to resolve. The same goes for education, which is at an historic low, he said.

The opposition Socialists (MSZP) called the prime minister a “coward” for what they said was his failure to face Hungary’s reality. Party spokesman Istvan Nyako criticised Orban for not speaking about the problems concerning the public, “the rows snaking in front of soup kitchens” and “the practice of heating the lawns of stadiums instead of family homes”. “Nor did he disclose where he had hidden the profit stemming from the decrease in global gas and electricity prices,” he said. Last year Hungary left the organisation that mobilises its member states against corruption, Nyako said. Rather than a destination for refugees from Europe, Hungary is a place to flee from as the country fell behind the other Visegrad countries in terms of competitiveness and wages, he said.

The leftist Democratic Coalition said Orban’s speech was “incoherent” and had not even resembled a state of the nation address. The prime minister was supposed to give account of the work of the government, the state of society and lay out a vision for the future, but he did none of this, DK deputy leader Peter Niedermuller told a press conference. He did not even speak about the results of the latest PISA test, which clearly highlighted his government’s failed education policy and with which “they robbed young Hungarians of their futures,” Niedermuller said. He also criticised Orban for not bringing up corruption, and accused him of “deceiving” and “misleading” the public. While his job would be to give hope and a future to those who are struggling, he only gives these things to the business circles close to him, Niedermuller insisted.

Green opposition LMP accused Orban of deliberately keeping Hungary “weak” so that he could later claim that he is saving the country. “The hell Hungary’s getting stronger,” LMP spokesman Jozsef Gal said, arguing that Hungary’s interests were being subordinated to the interests of Russia, Wall Street and Hungarian oligarchs. He said the country’s biggest problem was that wages “are growing a lot slower than the bank accounts of Fidesz oligarchs”. Until this is reversed, Hungary has no future, he insisted. Gal was also critical of Orban for not mentioning the woes of the education and health sectors.

The Liberal Party said Orbán lives “in his own world”, and had failed to address real problems of the country in his address held “in the shadow of barricades and police cordons”. It is “shocking” and “sad” to hear Orbán trying to parade the “total disaster” of more than six years’ government as a success, the party said in a statement.