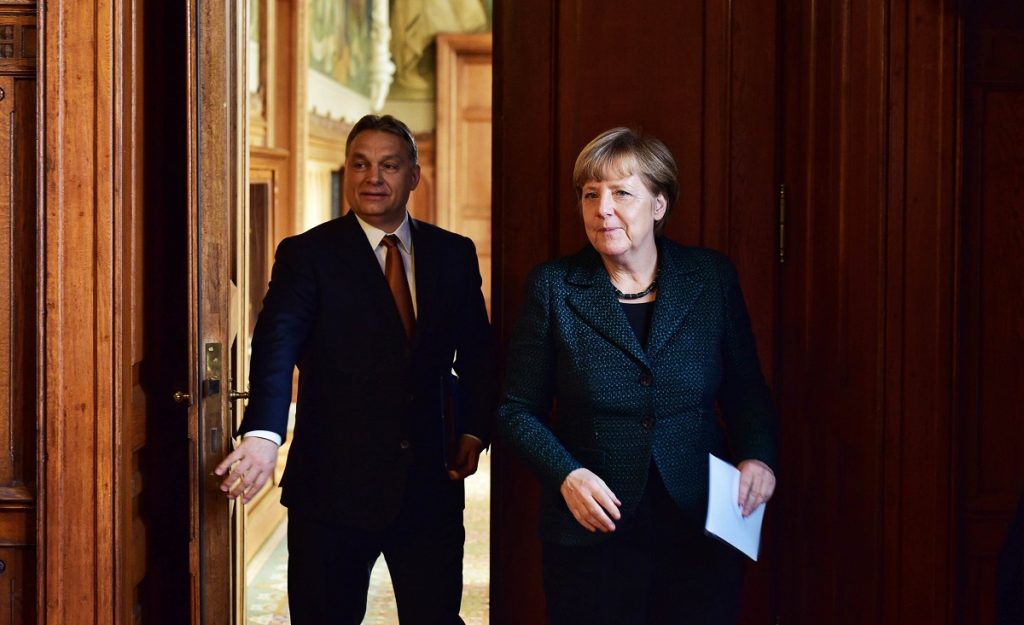 Hungarian people not only respect but also like the Germans and Germans living in Hungary have a huge role in this. Angela Merkel is the most important advocate of European unity and she is doing an invaluable work to establish it, PM Viktor Orbán after talks with the German chancellor. The Hungarian-German economic cooperation of recent years has proved that it is a part of Hungary’s present and future, Orbán said.   There is a great role of German investments in the improving Hungarian employment figures as 25% of new jobs is coming from German investments, six thousand companies created 300.000 jobs in Hungary, he added. Hungary’s PM also emphasized that “these figures demonstrate well that Germany is an inseparable part of Hungarian history.” In the past four years, German businesses have invested 6 billion euros in Hungary, Orbán noted. “Danke Deutschland,” Orbán said.

Angela Merkel also hailed Hungary’s macro-economic development and the German economy’s contribution to it. She called bilateral trade very intensive, adding that Germany’s economic players highly prized a stable framework. Once these are in place, German companies are loyal investors, she added. During Merkel’s visit to Budapest, German business leaders in Hungary also had to opportunity to hold a meeting with the German Chancellor to discuss bilateral economic relations. Angela Merkel expressed “great interest in hearing about the situation and expectations of German companies operating in Hungary,” Gabriel Brennauer, the managing director of the German-Hungarian Chamber of Industry and Trade said. The leaders briefed Merkel about conditions in Hungary that influence their operations, Gabriel Brennauer said.

In talks with the German Chancellor, PM Viktor Orbán voiced support for Germany’s plans targeting Eurasian cooperation. Looking at Europe’s strategic and historical horizon, Orbán said he could not imagine an EU which did not incorporate Russian energy resources and raw materials. So Hungary considers the German chancellor’s position sensible in the context of Europe-Asia cooperation, he said. On the topic of energy affairs, Viktor Orbán noted that Hungarian industry and households primarily used gas, and the country’s exposure to gas is of a higher order than Germany’s. This year Hungary’s long-term gas supply contract is expiring, and Hungary needs a serious quantity of natural gas from Russia, he said. “This is the problem” that has to be solved in the first half of the year, because otherwise Hungary’s households and industry will not function, the prime minister said. Concerning Hungary’s energy dependence, Angela Merkel highlighted the importance of diversifying energy resources, adding that efforts must be made for predictable and reliable energy supplies.

Concerning the crisis in Ukraine, Angela Merkel said that Russia, with its actions, had countered those ideals and tried to show that might is right instead of recognising the might of the law. Neither Germany nor Hungary will supply Ukraine with weapons, both leaders confirmed. Merkel told a press conference that she does not believe in an armed resolution to the Ukraine conflict. She added that her country would do everything to resolve the conflict through negotiations. Such a resolution would need a truce as soon as possible, for which the Minsk Agreement is a good basis, she said.

Speaking about Hungarian affairs, Angela Merkel stressed that the majority, especially if it is a large one, should show self-restraint and protect minorities. The constitution should be “dealt with” cautiously, in a consensus-seeking way, she said. Merkel also argued for the importance of social dialogue, saying that while the Hungarian government has a strong majority it is also important to appreciate the role of the opposition, civil society and the media.  Pluralism, peace and freedom constitute the foundations of Europe, German Chancellor Angela Merkel said in Budapest. These are values that European nations should take a stand for in the Ukraine conflict, she said. It is on the basis of these values that European countries should jointly fight against the discrimination of minorities, she added. These are the values that are reflected by civil organisations and the independent media, too, Merkel said in a lecture held in the Andrássy Gyula German-language University of Budapest.