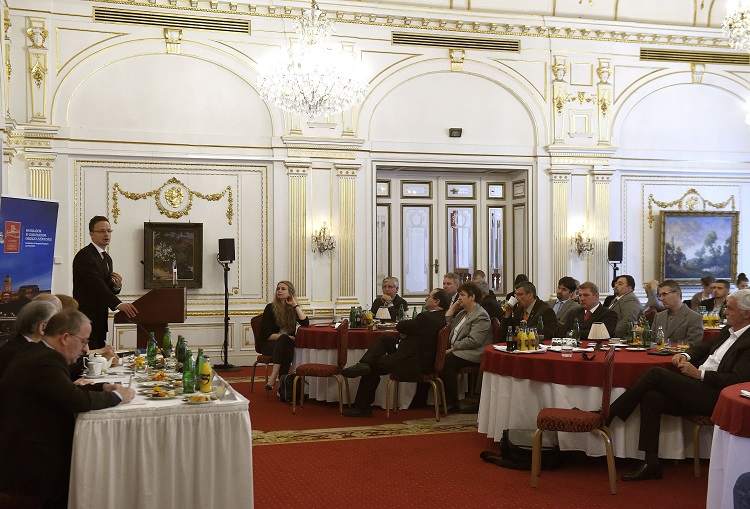 Hungary’s pragmatic and straightforward cooperation with Russia; the appointment of a US negotiator will be decisive in demonstrating the openness and goodwill for a US-Hungarian intergovernmental agreement on higher education; Hungary aims to foster the region’s best investment environment by creating the most efficient way to link production through digitization, spoke about the mentioned topics Péter Szijjartó, the foreign affairs and trade minister of Hungary at the meeting of Confederation of Hungarian Employers and Industrialists.

About the Russian connections:

Hungary is engaged in pragmatic and straightforward cooperation with Russia, Péter Szijjártó, the foreign affairs and trade minister, said. The reason is that 85% of the country’s gas imports come from Russia, he said. Remarks about close cooperation between the two countries are aimed at whipping up a political scandal, the minister told a news conference ahead of a meeting of the Confederation of Hungarian Employers and Industrialists. Szijjártó said Hungarian industry would not function without the agreement signed at the end of 2015 on gas purchases. He insisted that western European countries maintain far closer relations with Russia than Hungary does, adding that at last year’s St Petersburg economic forum “more of them spoke German than Russian”. Szijjártó said it was “interesting” that the criticism levelled at Hungary during Russian President Vladimir Putin’s visit to Budapest had been absent when it came to other visits, such as the German chancellor’s visit to Moscow. The Nord Stream gas pipeline project with Gazprom is not being built by Hungary but by “German, French, Italian and perhaps Austrian companies”, he said. Yet criticism is mute on this score, he added.

Szijjártó said Hungary’s place is in Europe, the European Union and NATO, but no one disputes that pragmatic, balanced and calm cooperation must be maintained with Russia. There is no question of anything going beyond this, he added. He said Russia did not pose a direct security threat to Hungary, and he insisted that Moscow had no interest in acting with aggression against a NATO member state. “The Poles and the Baltic countries think differently, however,” he added. Commenting on a remark by Emmanuel Macron, a candidate in the upcoming second round of France’s election, comparing Prime Minister Viktor Orbán with Putin and Marine Le Pen, Szijjártó said it was unworthy and disrespectful to “spread lies” about the leader of a third country during an election campaign. Hungary is a democracy and “the current Hungarian PM has unmistakable merits in having overthrown the dictatorship”.

Decisive appointment with the US negotiator:

The appointment of a US negotiator will be decisive in demonstrating the openness and goodwill for a US-Hungarian intergovernmental agreement on higher education, Foreign Minister Péter Szijjártó said. In order to reach an agreement, the negotiator must have a proper mandate from their government, Szijjártó said ahead of a summit. The minister said he saw no reason why such a deal could not be struck. If the governments of Malaysia, Thailand and China are able to sign a deal with the Hungarian government on universities operating in Hungary, then it is unlikely that the US government would not be ready to sign the relevant deals in respect of the “excellent US universities”, he added. Three US universities operate in Hungary and they are “quite serious institutions” for an intergovernmental agreement to be signed on their operational conditions, Szijjártó said. The deputy state secretary appointed for the talks by Hungary has already consulted all four non-European Union embassies representing countries from where universities operate in Hungary. Further, neither the Thai, the Malaysian nor Chinese embassies have seen any obstacles to meeting the necessary conditions, and they are now asking the necessary mandates from their capitals, Szijjártó added. 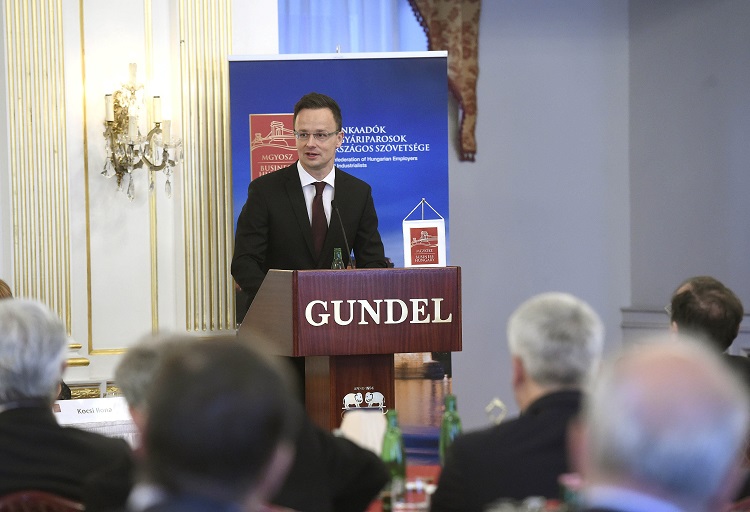 Hungary’s aim in the region:

Hungary aims to foster the region’s best investment environment by creating the most efficient way to link production through digitization, Péter Szijjártó said. Further, it aims to provide the most competitive base for research and development, he added. Amid the current turning point for the global economy, the success of Hungary’s open economy depends on whether it can provide an appropriate digital abode and tax environment, the minister told a meeting of the Confederation. The challenge on the stretched labour market can be met thanks to government job-training subsidies calculated on the basis of the number of trainees and talks with the confederation are under way to increase the maximum subsidy to 4,000 euros from 3,000 while raising the training period to two years from 18 months. The car industry and the transition to new technology continue to play leading roles in Hungary’s economy, he said, adding that a major announcement would soon be made in the field of electromobility. Several development centres are being set up for autonomous vehicles in Hungary and special attention is being paid to expanding the base of Hungarian suppliers, he added.

Discussing global trends, the minister said America’s more patriotic economic policy would determine global economic developments and adjustments should be made accordingly, taking into consideration the more than 9 billion dollars of US investments in Hungary. The other major factor is China’s constant expansion which is “seriously influencing” Europe’s competitiveness, Szijjártó said. Capital is moving not only from west to east but the other way round too, and Far-East companies are increasingly searching for production potential in Europe, he said. On the subject of Brexit, Szijjártó termed Britain’s exit from the EU as a “huge failure” which, he said, shows that certain reforms and changes are needed in integration. He said the “nightmare scenario” would be for European negotiators to take Brexit as a personal insult, since this would mean that the UK would forge separate free-trade agreements with strong economic players around the world with which the EU has no such deals. For an open economy such as Hungary’s, this would be extremely detrimental, he said.