The Hungarian team dominated proceedings and Péter Máté had a close-range effort hacked off the line after Sidibe had missed a chance to give his side an early lead. However, the striker made amends in the second half with a powerful effort from the spot.

Though the visitors from Belarus frustrated the home side in a tight first half, they could have gone a goal down after 20 minutes when Sidibe headed over Rene Mihelič’s corner. Debrecen came even closer soon after, but, after Sergei Chernik dropped a cross at Máté’s feet, Anri Khagush reacted quickly to clear the defender’s shot.

BATE could not hold on in the second half, though, and after Chernik brought down Sidibe in the box, the former Senegalese international tucked away the ensuing spot kick. Debrecen could have taken a larger advantage into the second leg, but substitute L’Imam Seydi failed to beat Chernik when Selim Bouadla played him through in the final seconds. 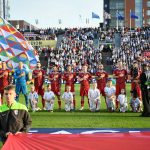