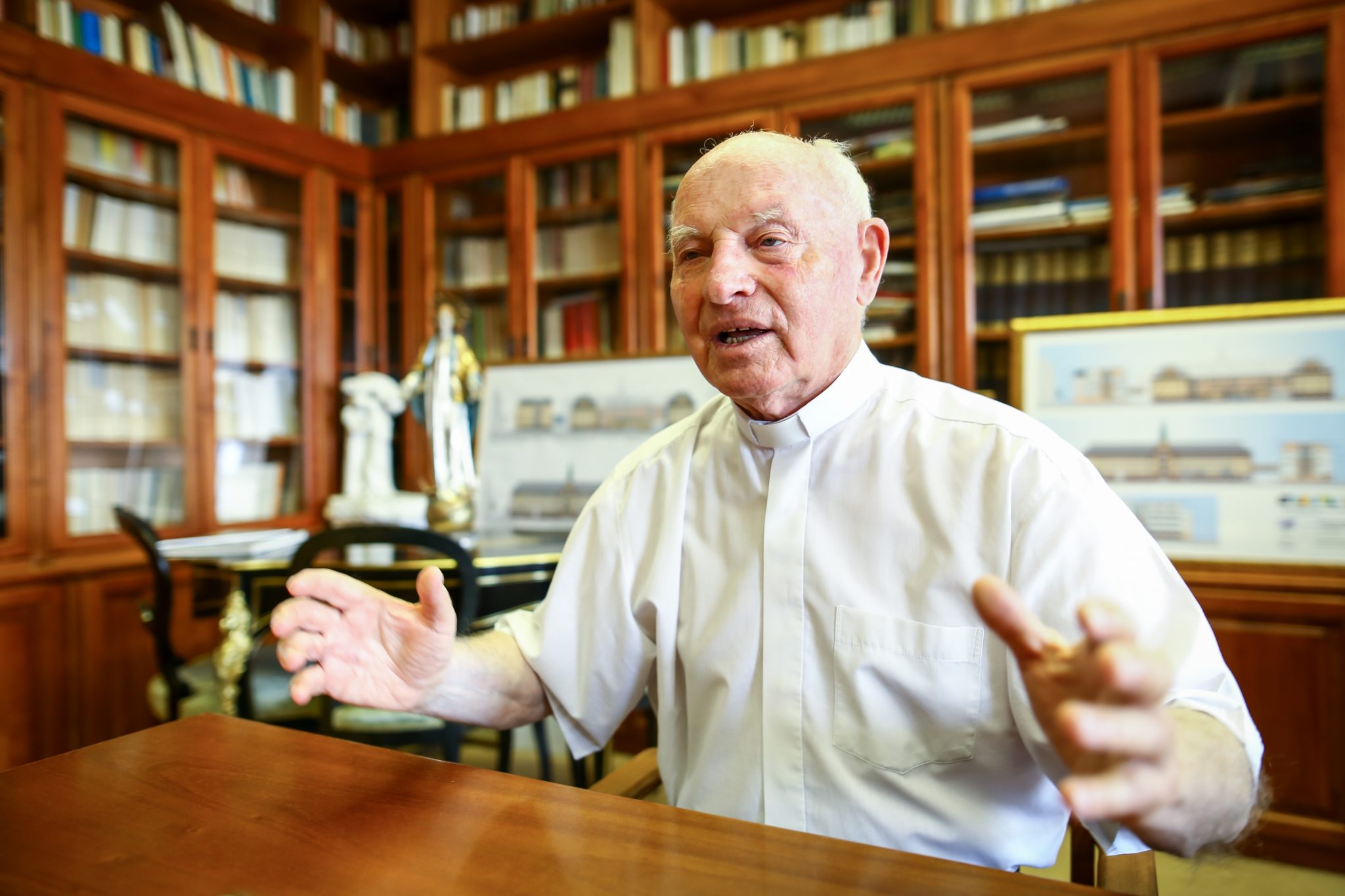 Tens of thousands of East Germans came to Hungary in the summer of 1989 because of the rumor spread in the German Democratic Republic (GDR) that the Austro-Hungarian border would be opened for a few hours. They camped here in Hungary for weeks, even months, to be able to reach the western part of their country again. They needed accommodation, food and some encouragement as well. The newly formed Hungarian Maltese Charity Service and the Zugliget Parish community helped in this. On the occasion of the 30th Pan-European Picnic, Roman Catholic priest Father Imre Kozma, President of the Hungarian Charity Service of The Order of Malta, spoke to Hungary Today’s sister site, Ungarn Heute about the opening of the border.

***
You arrived at a previous milestone anniversary of the Pan-European Picnic in a 30-year-old Trabant. The police almost pulled you out of the delegation consisting of all Western cars and even Angela Merkel admired the car back then. Will you arrive at Sopron with the Trabant again?

(laughs) Yes, I plan to go with that…

Just as the police found your Trabant strange, today’s young people may find it curious that there were times when the road from East Germany to West Germany lead through a parish garden in Zugliget. Why exactly Zugliget?

Perhaps Zugliget became important because there the community expressed a great truth: that Christianity has a mission and that the purpose of the Church is not limited within the walls of the temple but outside the walls as well. The activities of the parish were already well-known to the West Germans: in Zugliget, the first social network had already been established in the mid-eighties, which was also welcomed by members of the Communist Party. 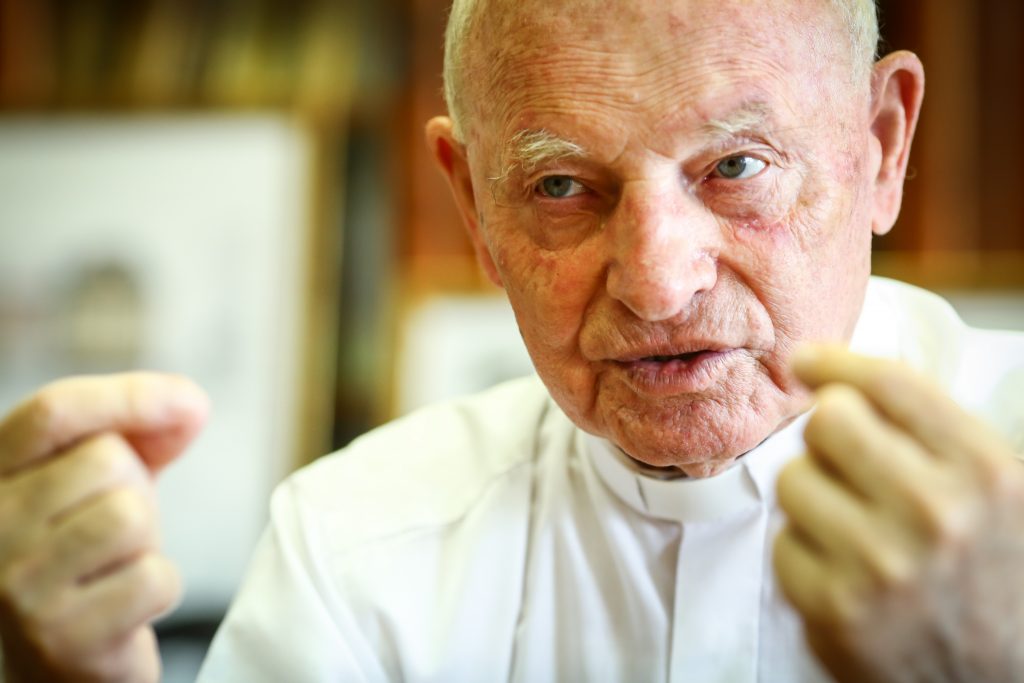 Meanwhile, the police were taking notes of the license plates of the people coming to the temple, and I was regularly called in to the secret police for questioning.

It was very peculiar at that time that there was a Christian community with a willingness to take risks.

Therefore, it may not have been a coincidence that on the evening of August 13, 1989, the West German Consul contacted me at the Zugliget Parish and asked for help.

Did they need courage on the other side as well? After all, those who came to Hungary from East Germany have been socialized just like us: that you should never trust anyone. Have you encountered mistrust?

When the East Germans appeared on the streets of Budapest, their caravans parked in our street and in the park in front of the church, hundreds of people camped here. There were some 30 thousand East Germans in the Hungarian capital. Of course, we addressed and talked to those camping around the church, but at that time there was no mention of a refugee camp or even opening of the church gates. So far we had only opened our hearts.

The street residents were also very nice, letting these people into their homes, where they could wash and clean themselves inside. Interestingly, the refugees only realized when we opened the camp that they might have been afraid of these people. They all arrived here knowing they were never going back, but at the same time, they were afraid that if many of them gathered in the same place, they might be repatriated. Maybe that’s why they were scared of us. What’s more shocking is that they were more afraid of each other. 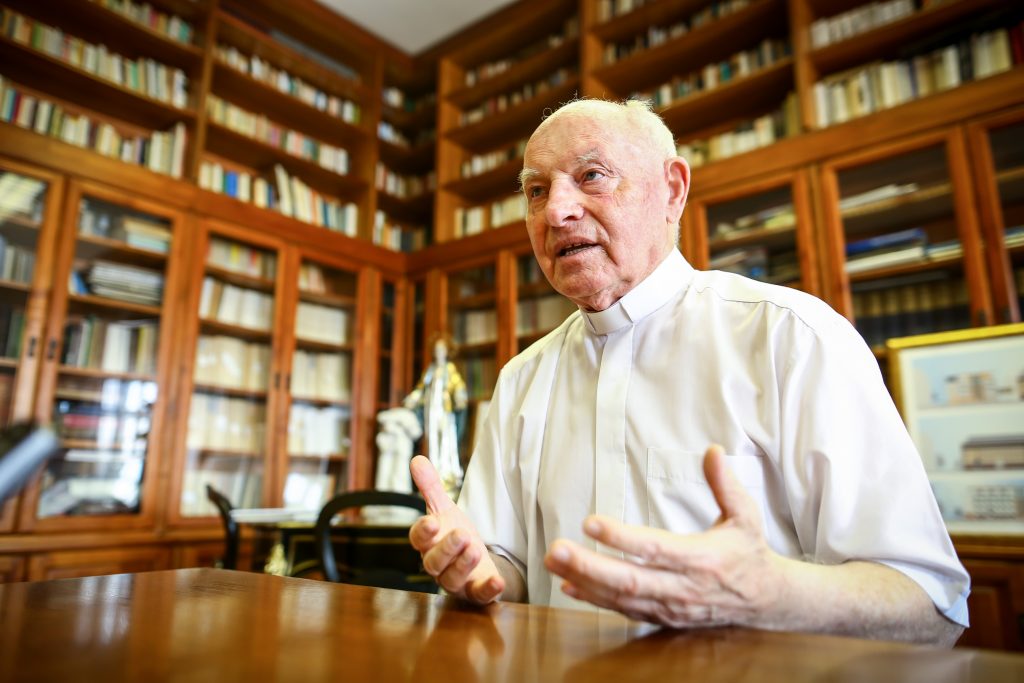 There were a total of four camps in Budapest. In three months, 48,600 people were placed in these. 7-800 volunteers worked in every camp- in ours, members of the Zugliget community. They started to dissolve after about only two weeks, which is when we started to initiate deeper conversations. For example, what their plans were or why they left their home country. Although they didn’t seem to communicate with each other, they all said the same thing, independently: “They took away our heritage.” What did they mean by heritage?

The legacy of their ancestors, the treasures that form and shape human thinking. This was taken away from them and another ideology was forced on them. They had enough of this.

Do you still remember any relationships or conversations born from this gradual dissolution after 30 years?

All of the stories may be summed up with the same thing: that in these people “a new hope was born.”

Many people put it as they were “reborn.” Many of them wondered what it meant to be accepted by others – that they accept and receive them, stand by them in times of trouble. Not only did we give them tents and food, but also a glimpse of what Christian love means.

While they lived a much better life at home than we did, they experienced that people can love each other more than themselves. They can give up something, for the sake of helping another person. In the beginning, the West German Maltese from Munich and Essen helped us a lot. They sent a delegate from both places.

One of the most defining experiences for me was when a few days after leaving, the East German Consul appeared and asked for a chance to meet the refugees of our camp. Of course, I said yes. I said he can come, but I cannot guarantee his safety. However, the West German delegates didn’t like the idea of the visit that much. The night before he arrived, I asked all the campers to swear they would avoid any violence. The next day, on one side of the fence, stood the East Germans who fled the country, on the other the consul. The crowd was angry but disciplined. I offered the consul a caravan where anyone could visit him who wanted to but nobody did.

What about Hungarian politics? Have they tried to control your activities? Miklós Németh was the Prime Minister at the time and he regularly visited the camp. Did he try to give you instructions?

We were very happy because we could do something we had never done: we helped a lot of people at once. Those in power also welcomed this.

For me, the real change of the regime was that politics did not interfere with the tasks of our Christian mission.

Was it the first time you felt this?

Yes, even though I had been a priest for a couple of years at the time, I felt for the first time that I was in my element, my time had finally come. That’s why I became a priest- to help people who need support. The political power did not want to control us, it had no expectations of us- it simply took note of what we did, and were even pleased. Miklós Németh regularly inquired about our work, came to the camp, and was pleased that the residents were calm. This had a great liberating power. 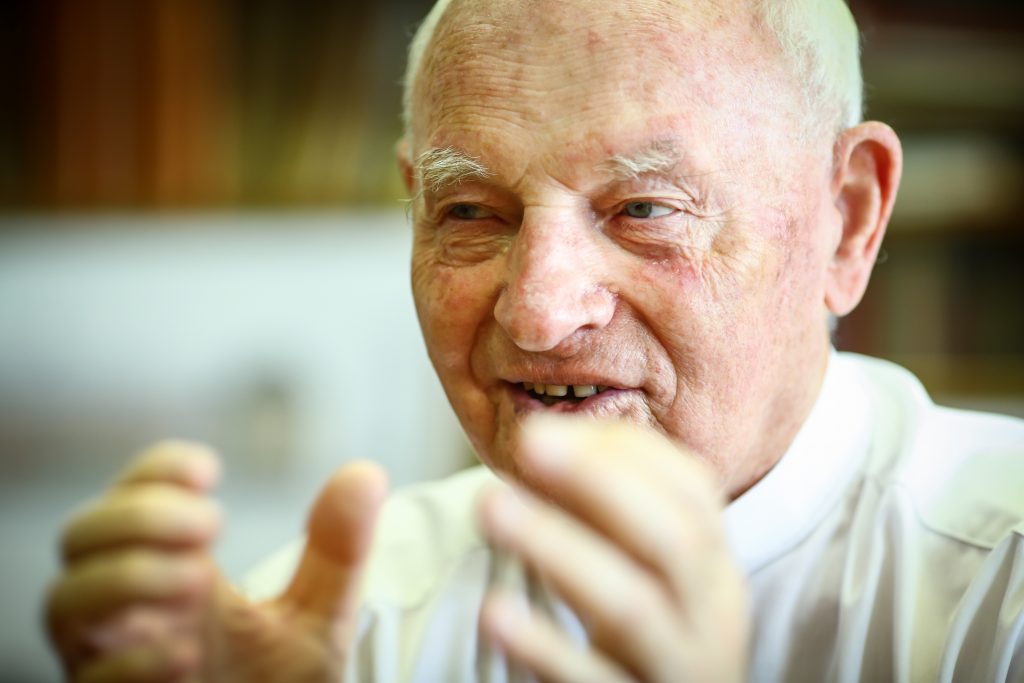 Where are we now, 30 years later? Could it be possible today that the people living near the Zugliget Parish are helping masses of strangers? Haven’t we symbolically rebuilt the wall that collapsed back then?

During the decades of communism following World War II, there were people who still had a Christian education. Even under the political pressure, these people considered Christian values important. It was decisive in their human relationships that we are indebted to one another. Today, this message is no longer in us, a generation has grown up without such motivation. However, people are no worse off today than they used to be! Those who are indifferent to Christian values can do good as well. Maybe the main difference is that there is always an interest standing behind good deeds. At that time, doing good had no message, because after World War II, people simply wanted to survive. Individual interest was less important, they wanted to survive the difficult times together.

This kind of commitment that we live for each other and take responsibility for one another has weakened. 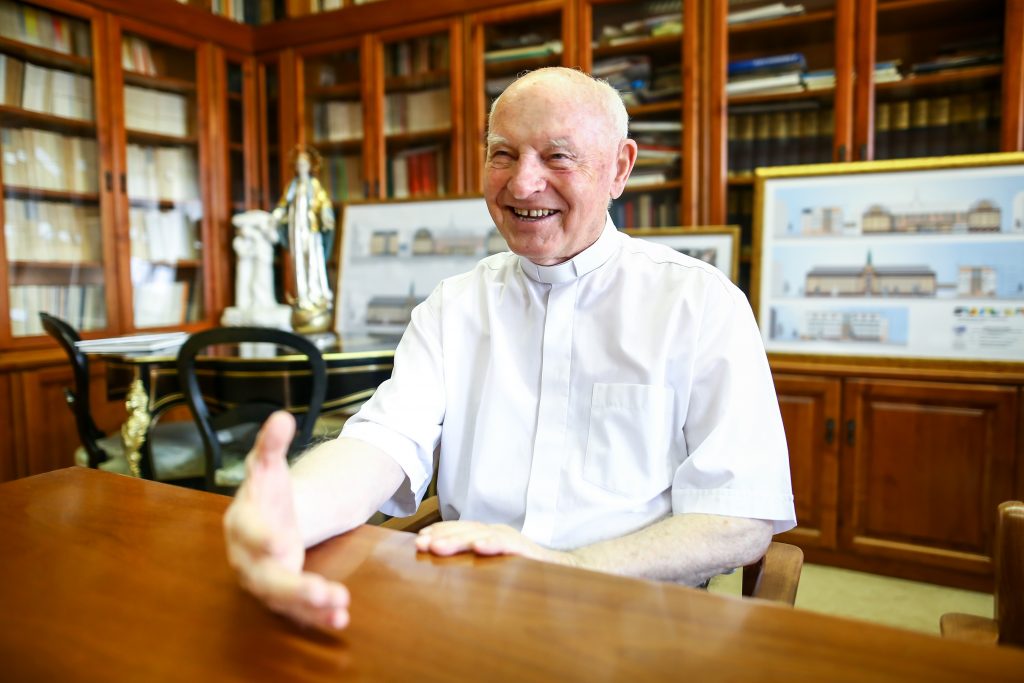 When we remember the events of 30 years ago, does it help to warn us with this message?

30 years ago, there was no need to ask people to come and help because they were coming by themselves – more people came than we needed! For example, by the evening on the first day, the camp was already set up in the Zugliget churchyard and we were able to house 960 people.

Today, nobody finds time to help, so people are not coming, even if we ask them to. This shouldn’t be like this in a healthy society. Certainly, we are referencing Christian heritage and Christian values in Europe and in Hungary because of the lack of it.

The pan-European picnic was followed by the events in Romania. The Hungarian President asked me to organize relief operations. I have a heart-warming experience with this. I suggested at the Sunday Mass that I needed around 70-80 men in their 30s-50s, who could volunteer for a month to successfully implement this program. 139 people applied. 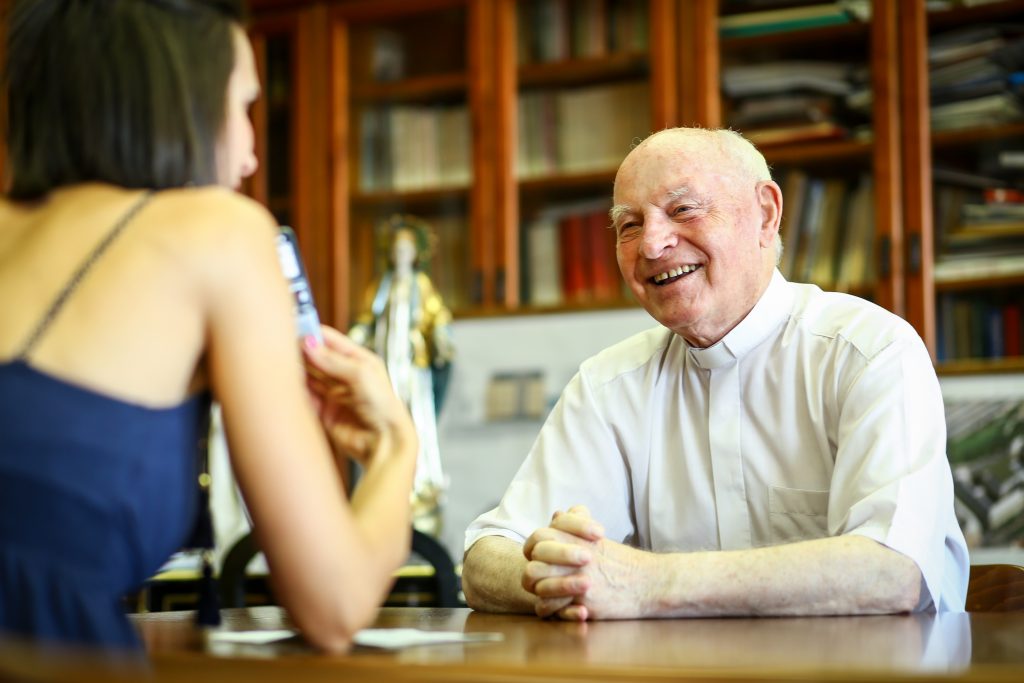 Could this be the message of Piknik30?

Today, a call for action is not enough.

At the time, people were more convinced that it was possible to do something that makes sense. It puts off the will to act that many people measure even the noblest deeds on false balance.

In 1994, we placed a memorial plaque on the wall of the Zugliget church on the 5th anniversary of the opening of the camp. The opening speech was delivered by German Ambassador Otto-Raban von Heinichen. It consisted of only three sentences:

I ask you, do you know a nation, which has helped a greater, richer one, unselfishly? I know one nation who did. There is only one of its kind in the whole world, HUNGARY, because Hungarians have the biggest hearts. ”