A court has ordered the arrest of a Pakistani man apprehended in Hungary in line with an international warrant for alleged multiple murders, the Budapest chief prosecutor’s office said on Sunday.

The man is suspected of having committed the murders in Pakistan between 2009 and 2017, the statement said.

Hungary’s Operational Police National Investigation Office has detained the man and interviewed him for alleged multiple murders, blackmail, armed robbery in a gang and illegal use of weapons.

The prosecutor’s office has proposed detention stating that it is the only way to guarantee the man’s presence in the procedure and prevent him from repeating his crimes.

The ruling is non-final, an appeal has been submitted, the statement said. 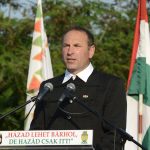