Otto von Habsburg and the Fall of Communism: International Conference to Be Held

An international conference focusing on the role Otto von Habsburg played in the fall of communism in 1989 will be held in Budapest on October 10-11, the organiser said on Wednesday.

Otto von Habsburg was the last crown prince of the Austro-Hungary Monarchy until its dissolution in 1919. He served as President of the International Paneuropean Union between 1973 and 2004 and was an MEP for the Christian Social Union of Bavaria between 1979 and 1999. He was a co-initiator of Hungary’s 1989 Pan-European Picnic, one of a series of events that led to the dismantling of the Iron Curtain and the fall of communism.

The event is sponsored by the Habsburg Otto Foundation set up in 2017, Gergely Prőhle, its director, told a press conference.

“Otto von Habsburg was for many decades the only one who spoke in Hungarian in the European Parliament. This is proof that he drew the lesson from the monarchy’s history: he tried to shape his own policy so as to properly represent the interests of small nations. He can be considered a great Hungarian patriot,” Prőhle said.

The conference will be addressed by Zsolt Semjén, Hungary’s deputy prime minister in charge of Hungarian communities abroad, church policy and national and ethnic minorities, and Gergely Gulyás, the head of the Prime Minister’s Office. Speakers will further include Ingo Friedrich, former Vice-President of the European Parliament, Walburga Habsburg-Douglas, Vice-President of the Pan-European Union, and Eva Demmerle, a historian and writer, Otto von Habsburg’s political advisor.

In the featured photo: Otto von Habsburg in 1989. Photo via Fortepan/Zsolt Szigetváry 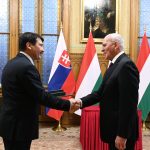