Hungary and the United States today support and protect the same values, Prime Minister Viktor Orbán said at a reception hosted by the US Embassy to mark Independence Day in Budapest on Tuesday. It was the first time in nine years that the Hungarian Prime Minister took part in the event.

Concerning Hungarian-American relations, the prime minister said that over the past several years there had been “highs and lows, good and bad times” in the two countries’ ties.

Hungarians believe bilateral relations are on the right track now, he said, thanking David B. Cornstein, the US Ambassador to Hungary.

Orbán said the state of Hungarian-US ties generally depended on whether there was an overlap in the values supported by the US administration in power and those being protected by Hungary. “The answer to this question today is a resounding ‘yes’,” he said.

Orbán said Americans and Hungarians were right to believe that their countries should come first.

The two countries mutually respect each other’s “patriotic viewpoints”, Orbán said. He said both Hungary and the US considered it a duty to guarantee the safety of their citizens and were committed to safeguarding the value of gender equality. Equally, the prime minister added, “the foundations of our nations rest on families consisting of a father, a mother and children”.

Orbán also said neither country was ready to accept “the modern political hypocrisy” which he said ignored the fact that Christianity was the most persecuted religion in the world today. Hungary and the US are working closely together to help Christian communities in need, he added.

The prime minister also said that as a central European country, Hungary had learned the lessons of history: whenever there was a conflict between East and West, central Europeans always lost out. 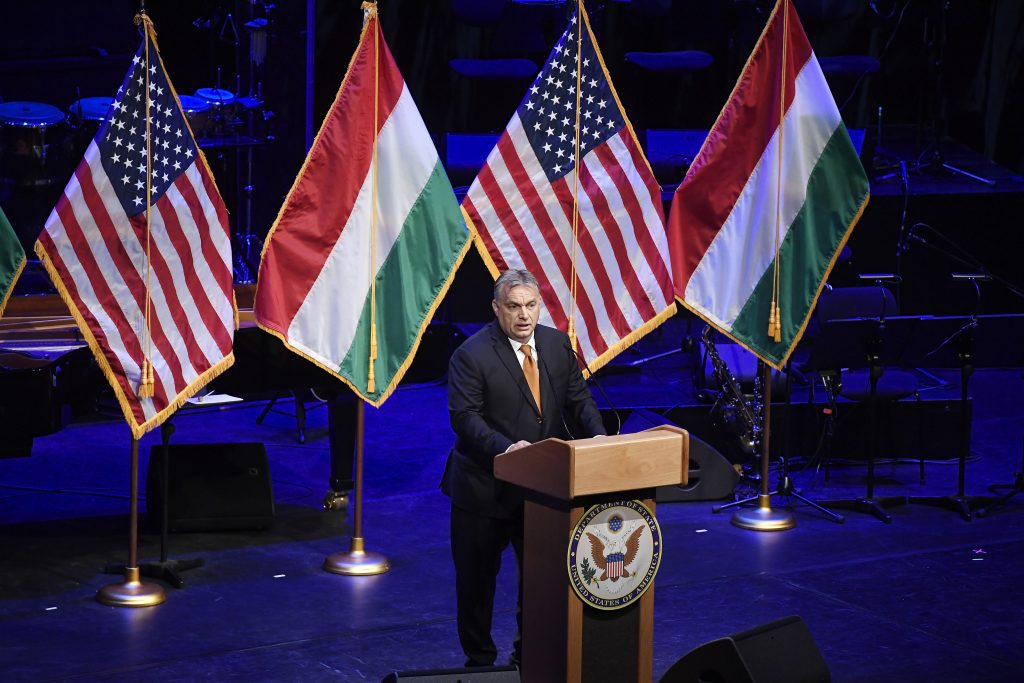 This was why, he said, Hungary’s interests lay in a peaceful and stable CEE region, the best guarantee for which he said was membership in NATO. The Prime Minister assured the US that the country “can count on us in the fight for our common values, whether it be in the meeting rooms or on the battlefields”.

Orbán, who last attended the US Embassy’s Independence Day reception nine years ago, reassured the US that it can count on Hungary in the struggle for the two countries’ shared values.

Cornstein in his address praised Hungarian-US relations, calling Orbán a “partner” and a “friend”.

In the featured photo: PM Viktor Orbán and US Ambassador Dabid B. Cornstein. Photo by Szilárd Koszticsák/MTI