“The facts show that the last ten years were the most successful ten years in Hungary’s last 100 years,” Prime Minister Viktor Orbán said in his state-of-the-nation address on Sunday.

One hundred years after the “death sentence” that was the WWI Trianon Peace Treaty, “we’re alive and Hungary is still here”, Prime Minister Viktor Orbán said.

Not only are we alive but we have also freed ourselves from the clutches of a hostile ring of countries,”

the prime minister told a crowd at Budapest’s Várkert Bazár.

Orbán said Hungary was now finding common ground with neighbouring Slovakia, Serbia, Croatia and Slovenia, and was in a position to engage in broad cooperation and form alliances with them.

“History has again given central European peoples a chance to build a new alliance based on their own national interests, allowing us to defend ourselves against threats from both the east and the west,” Orbán said.

The key to the nation’s prosperity is the restoration of its self-esteem, the Hungarian prime minister said on Sunday. 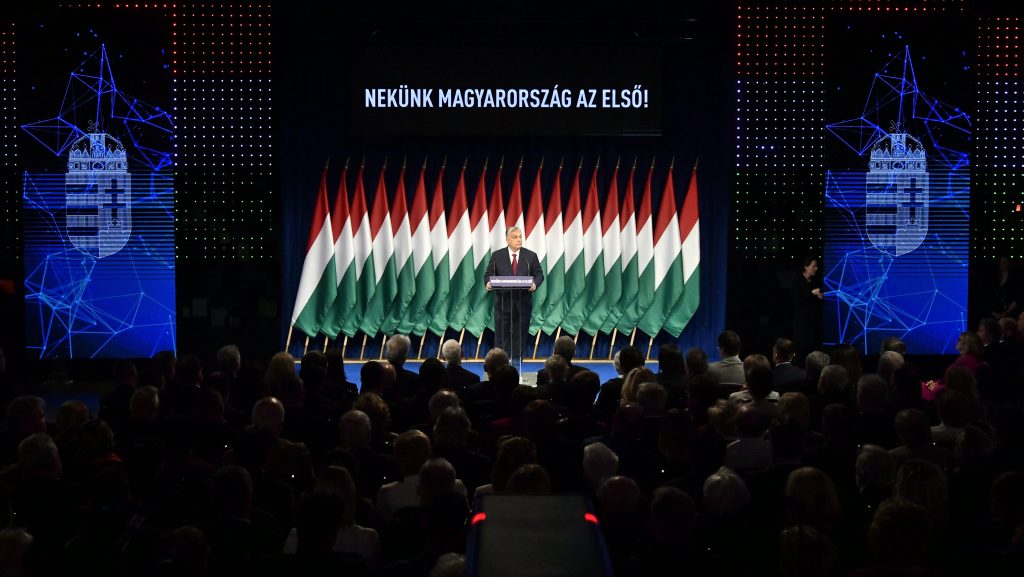 The success story of every emerging nation begins with the reinforcement of their self-esteem, while the citizens of every troubled country can only regain their personal self-esteem with the return of their own nation’s self-esteem, Viktor Orbán said.

Orbán said that in 2010 the objective of his government taking office had been “to prove to ourselves and to the world that we are still somebody”.

We figured that we would either find a path or create one for ourselves,”

he said, adding that the only option left for his government had been the latter since

the path set by Brussels and Washington was unacceptable for us.”

Orbán said that looking back after ten years he could say “with due modesty” that “we figured out what to do and we did it”.

Orbán said his government had “sent the IMF home”, managed to pay back the loans early, created 850,000 jobs, put the country’s finances in order and launched schemes to help “a reunification of the nation”, and reconnected Hungarian communities beyond the borders with Hungary.

He said that in economic reports released in Brussels this week “the whole of Europe may read that in 2019 the Hungarian economy registered the highest growth rate on the whole continent”.

The prime minister said Hungarians were not used to thinking of themselves as a successful people.

Detailing Hungary’s achievements over the past ten years, Orbán said that in no other decade over the past century had the country been both externally and internally balanced while maintaining sustainable growth. Hungary achieved all this while keeping wealth inequality at a moderate level according to European standards, he said, adding that this meant that Hungary’s broader society had benefited from the country’s growth. 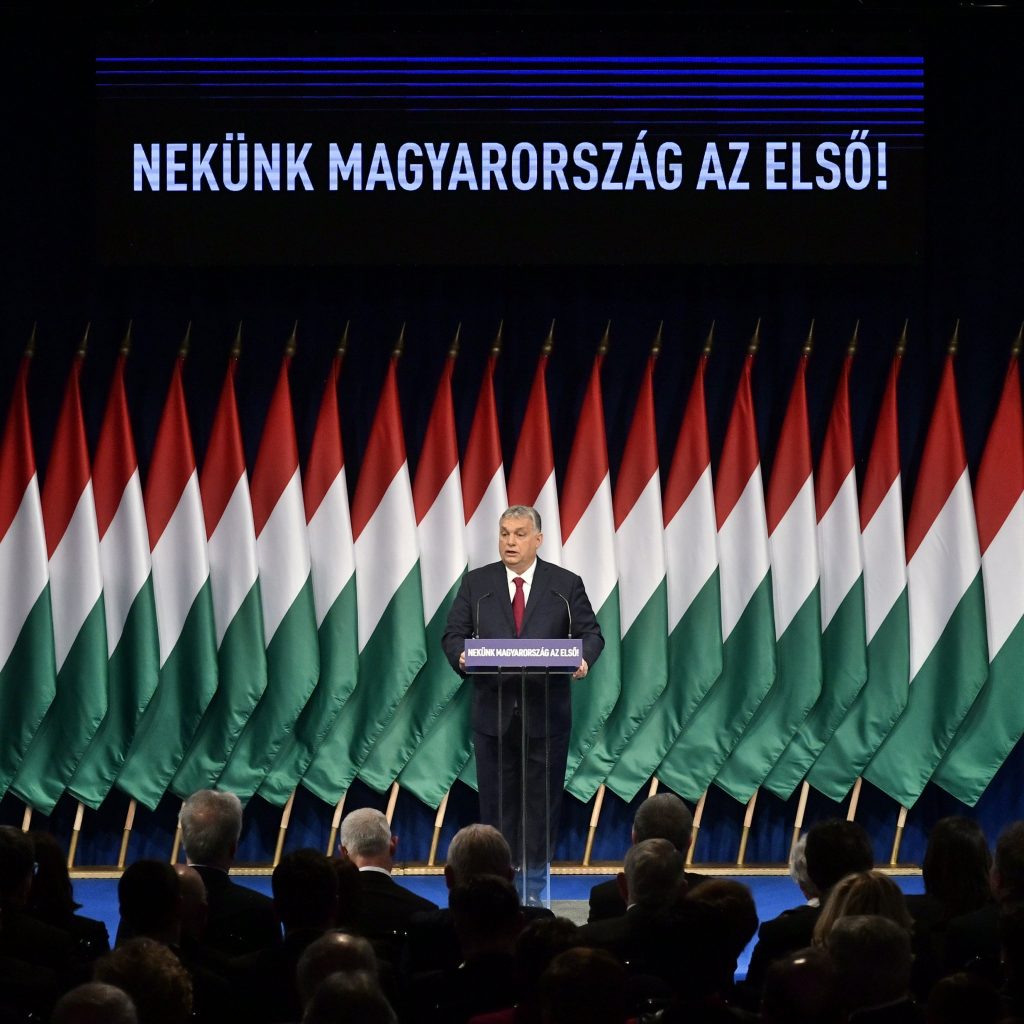 Vulnerable social groups like young people, people aged older than 50, mothers and low-skilled workers have all been able to find jobs, he said. Wages are on the rise and the minimum wage for both skilled and unskilled workers has been doubled. Investments in Hungary and exports both hit record highs last year, Orbán said, noting that Hungary ranks 94th in the world in population size and 34th in terms of the size of its export volume.

Orbán said those who were critical of Hungarian teachers, the education sector and vocational training should hold back on their criticism, arguing that workers, experts and engineers “who run the world’s most modern factories here in Hungary all graduated from our schools and universities”.

Over the past ten years we also learned that Europe is not in Brussels,”

Europe is us and we don’t have to please the tired Brussels elites . In the past we used to think that Europe was our future but today we know that we are the future of Europe.”

Orbán said the Carpathian Basin today was a source of strength that stemmed from the recognition that “being Hungarian is promising and uplifting”.

“Our nation knows that Hungary comes first,” he said.

Preserving and modernising jobs will remain an important goal for Hungary in 2020 and beyond, Prime Minister Viktor Orbán said.

The prime minister added that in terms of growth “Europe’s economy, and in particular the euro zone region, has simply stalled”, noting that Hungary had 85 percent of its exports going to those countries.

“This means that their problem is our problem,” he said.

Hungary must focus its efforts in 2020 and in the years to come on retaining jobs, he said.

In order to achieve that goal taxes must be reduced, Orbán said, pledging to cut payroll taxes and taxes on small businesses.

“Further, we will preserve the value of pensions, in line with the agreement we concluded with the pensioners,” he said.

Hungary’s government this past week adopted a climate protection action plan which aims to make 90 percent of the electricity generated in Hungary carbon-free by 2030, Prime Minister Viktor Orbán said.

Orbán said it was clear from his government’s plan that it was prepared to be accountable for it in 2030.

Detailing the plan, the prime minister said that as of July 1, the government will start eliminating illegal waste sites and penalising polluters. Single-use plastics will be banned and a deposit return scheme will be introduced for glass and plastic bottles and cans, he said. The action plan will also protect rivers from waste flowing in from abroad, Orbán added.

The government will also introduce stricter regulations for multinational companies, mandating the use of environment-friendly technologies. Further, the government will allocate 32 billion forints (EUR 95.3m) towards supporting renewable energy production by small and medium-sized companies over the next two years.

Under the plan, ten new trees will be planted for every newborn in Hungary and by 2030 the proportion of the country’s forest area will be increased to 27 percent. Over the next ten years the capacity of solar power plants will be increased six-fold. The government will support the production and purchase of cheap electric vehicles and by 2022 new buses in public transport will all be electric, Orbán said.

A so-called green government bond will be introduced with the government vowing to spend all returns on them on climate-friendly schemes, the prime minister said.

Orbán said climate protection had become “politically fashionable”, but “all the empty talk cheapens the seriousness of the issue”. The prime minister said it was “time to act instead of just talking”.

Hungarians must again forge common ground when they fill out the next “national consultation” survey and provide a basis for the government’s policies, Prime Minister Viktor Orbán said.

He said a situation has emerged in Europe where “the rights of violent criminals have become more important to decision makers than those of law-abiding citizens.”

“They mock justice, the life instincts of honest people and are ready to defend perpetrators instead of victims,” he said.

“This dangerous phenomenon has now reached Hungary and we are in for serious debates and international battles,” Orbán added.

The prime minister said foreign-funded organisations backed by US financier George Soros “and their hired lawyers are filing a myriad of lawsuits, abusing the protection of rights”.

On the subject of school segregation of Roma children in Gyöngyöspata, Orbán said the issue had arisen just as Roma families “started down a path of changing their way of life”. But, he said “this promising process was struck by lightning” when a court ruling turned the people of Gyöngyöspata against one another. Orbán said the organisation that had initiated the lawsuit in question was also funded by Soros.

“We continue to believe in a Hungary that is a safe home to all Hungarians and gives everyone a chance to live a good life,” he said. “We will not tolerate stigmatisation or discrimination against anyone over their ethnicity, but neither can it come with any advantage or privilege and everyone should earn their money irrespective of their background.”